CAPT. ALEXANDER BIRNIE, of Craigleith, Ont., was one of the many Scotch skippers from the Georgian Bay in schooner times, with a voice like the roar of a reef, square beard on square chest, and back like a barn door. He passed out only recently on his farm down in Sombra, whither he had retired after fifty years fighting the water.

Capt. Bernie always said the "best man aboard" any of his vessels was his wife. Known within and beyond the Scotch Block as "Annavann." This was a Georgian Bay phonetic rendering of Anna Bhan, or Fair Annie as the crude Saxon would have it. Mrs. Birnie was a glorious example of the fair-haired Kelt, like Boadicea, though her Highland ancestry came from further north than did the Norfolk princess of Tacitus' tale. "Annavann" was a grand wife and mother. She sailed with her husband as cook, and took her young daughters with her.

In 1876 or '77 Capt. Birnie loaded lumber for Lake Ontario in the two-masted schooner Otonabee at the Musquash Mills on Georgian Bay, and got as far as Cape Croker or thereabouts when it came down on him heavy from the northwest, with sleet and snow. He blew but his jibs, and the foresail split, and the Otonabee was all but unmanageable. With two men at the wheel he ran her before it under bare poles. But with no sail to pick her up she was washed by every overtaking sea and began to waterlog.

The deckload of lumber, saturated with snow sleet, and Georgian Bay, became so top heavy it threatened to roll the Otonabee over. Capt. Birnie set to work heaving it overboard to lighten her. The crew had to use handspikes and crowbars and windlass brakes to pound the frozen planks out of the iceberg formed over them, but after amazing effort they got her decks free and knocked out the bulwarks to let the bursting seas run off before they froze.

One stone jar of whiskey — soon emptied—was of no more help than so much watered tea. but "Annavann," helped by her little daughter Minnie—later Mrs. T. J. Dault, of Alliston—cooked kettle after kettle of food on the galley stove. They held the pots on with one fist and stirred with the other, and kept heart in all hands with steaming cockaleekie and oatmeal brose that lined the ribs like triple brass.

In the steel-grey gleam of early morning the Birnies could see their home on the hills behind Craigleith as the Otonabee went reeling past the surf-lined shore. An hour later and they were abreast of Collingwood, or Hen-and-Chickens as it used to be called, six miles farther to the eastward.

But there was no going in, with the sea that was running and the Otonabee rolling along in quarter-mile zig-zags her torn and frozen canvas streaming out in useless ribbons ahead of her.

Capt. Birnie sheered her as near the harbor entrance as she would come and let go an anchor. They thought she would take the windlass out by the roots when she rounded up. The wrung wood groaned as though the heart was bursting out of the barrel, until Whang! parted the chain.

"Gie her the ither!" bellowed Alex. through his windblown beard, and down thundered the second anchor from the starboard cathead.

"And the kedge" he roared. "Shackle on what's left o' the port chain cable, and eke it oot wi' the big towline."

With a quarter of a mile of chain and rope out ahead of her the battered Otonabee faced the smiter, backing away from the blast all the way across the face of Collingwood harbor. The flukes of the kedge broke on the boulder bottom, but the starboard bower held, and there the Otonabee reared and dived, in sight of safety. but still more in sight of destruction. Right under her stern, a few hundred yards away, gnashed the wicked boulders of a small projection of land, Fisherman's Point.

Capt. Alex. Clarke, of Collingwood, with his tug Mary Ann of Dunnville, gallantly attempted assistance. The Mary Ann was No. 1 on the Dominion Register of Steam Vessels, 1867. The biggest thing about her was her fat funnel. Then her fat beam. Then her fat whistle. She had just enough power to make a fair job of pulling a hen off a roost, but Alex Clarke was willing to try. With much difficulty he ranged close enough to wave a heaving-line.

"Annavann," good sailorman that she was, knew full well that if the Otonabee dared leave her anchors the Mary Ann could not pull her clear of the shore, and she would pile up on the point. And besides— a harbor tow bill was one thing, but the salvage bill for dragging a vessel off a lee shore in a gale might be ruinous.

None knew better than Capt. Birnie the soundness of his wife's judgment, nautically and commercially. But discipline had to be maintained. Especially before the world.

"Whisht, wumman," said he, and "Annavann" turned back contentedly to her red-hot galley stove. She also knew her lord and master.

"I'm married, myself," replied Alexander II., giving the Mary Ann the bells for full ahead and home.

Capt. James McCannell, of Port McNicoll, present master of the C.P.R. steamer Assiniboia, and Dave Williams, editor and publisher of the Collingwood Bulletin, were little boys then in Collingwood. They both remember standing on tip toe to look out of the school-house window at the Birnies' great battle for the life of the Otonabee. Two days and two nights she reared and plunged there under the windows, the gale pounding her, and the "black stanes" of Fisherman's Point licking their lips for her bones. And two days and two nights more "Annavann" fortified the freezing crew with her soup and porridge and sizzling side bacon, while they pumped and parcelled the plunging cables and pounded ice off as fast as it formed.

On the third day the wind lulled. The Mary Ann came out again from the harbor and this time she got a line on the Otonabee. The remaining anchor was hove up and, with much panting, the Mary Ann dragged the schooner into port.

Like many another, Capt. Birnie went from sail into steam, and did well. Thirty years later one of his commands, the steamer Ottawa, was less lucky than the Otonabee; or perhaps it was because "Annavann" was no longer with him.

The Ottawa was laden with a cargo of flax, and the trimming boards had either not been shipped or had broken down. Flax seed in bulk is about as fluid as mercury, and when the Ottawa got rolling in a heavy northwest snowstorm on Lake Superior on the 15th of November, 1909, the flax in the hold flowed from one side to the other like molasses in a jug. Finally she got such a bad list she wouldn't steer. They were off Passage Island, and a few hundred yards more would have put her into safety behind Isle Royale. But she wouldn't go. The water was drowning her fires and she was almost on her beams ends.

Capt. Jack Moles, of Toronto, was in the Ottawa as mate with Capt. Birnie. He got one of the boats clear on the lee side, and with great difficulty persuaded Capt. Birnie to get in when the rest of the crew— thirteen, all hands—had been taken off. They hung on for a few moments, by the old man's order, but someone slipped the painter, and next moment the Ottawa went down in deep water, rolling over as she did so.

Capt. Alex. Birnie, well on in his seventies, was thus left in command of a twenty-foot open boat, crowded with thirteen men, in a raging gale, in zero weather, on the wildest stretch of water in the western hemisphere.

To save him from perishing at once from exposure the crew insisted on lashing him in a tarpaulin and giving him an oar to handle. They had little hope of any of them coming through alive. But the valiant husband of valiant "Annavann" wielded his oar to such good purpose that he drove the lifeboat clear across Lake Superior before the howling blizzard. All night he and Capt. Moles steered, and the crew rowed a little, and bailed a lot, and pounded one another, and broke off the lumps of ice. And in the morning he landed them at Copper Harbor, on the Keeweenaw Peninsula, one hundred miles across the lake from Passage Island; frost bitten, but all hands safe.

The darkness had hardly gone;

I rose from the slumbering island

And saw where she panted and twinkled

And waited, in breathless excitement,

For me and the crack of dawn.

Her bell gave a peal of glee;

She blew her importunate whistle

And off we adventured together.

The bay was an oiled, silken surface.

As gray and as still as a lea.

The sunrise was on our right;

His flags were unfurled as we started,

And swiftly, as over the water

We hurried, both panting with rapture,

The glory grew ever more bright.

The tide of its beauty unloosing.

And filling the sky with its splendor

The little boat said to me.

She laughed, as we said "Goodbye,"

A little bit breathless and bashful,

And twinkled, though rather more shyly

But we have a sunrise in common,

That little steam ferry and I.

HOW THE OTONABEE came into port - The vessel here depicted is a similar schooner, the Belle, which came into Racine iced to the eyeballs. 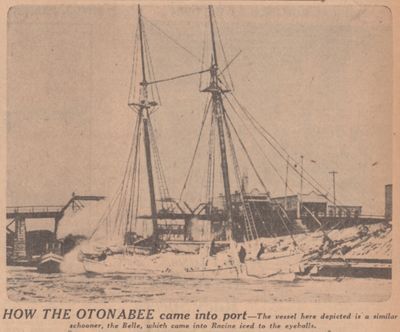