TWENTY-TWO schooners had names beginning with Mac. That is only a feeble indication of the power the Scotch were in sailing times on the Great Lakes, for there are many more proper names listed of Scottish origin, and still more indicating Scottish sympathy and inspiration.

Those last are the sort of ship names I like. Jessie Macdonald and Belle McPhee and Maggie Macrae are fine names, and those who bore them were fine girls, but on a ship's stern these have not the ring of Lowland Lass, Highland Beauty, Bonnie Doon, Chieftain, Caledonia, Garryowen, Highland Chief, Heather Belle, Jura, Lochiel, Orkney Lass, Scotland, Thistle, William Wallace, Lerwick, Highland Lassie, and so on.

These are not imaginary names invented to emphasize a point. They are from the nameboards of just a few of the schooners which commemorated "the lone shieling on the misty island" from which so many granite-framed iron-fisted square-bearded Scotsmen fared, to find fortune here on fresh water.

And how they loved to recall the land of brown heath and shaggy wood in their ship names, these Scots! When the Highlands poured forth their thousands "that a degenerate lord might herd his sheep" some of the Hebrideans settled around Colborne and formed the forgotten Port of Cramahe. It never had a harbor, but it was a township and a point of registry for vessels owned in Colborne, Cat Hollow and Lakeport, and the earliest Dominion roster (1874) has half a dozen schooners and brigantines hailing from the "Port of Cramaha," as it is there spelled. Among them the Jura, built by Connacher for the Shaws from the bottom of the older schooner Marion, and commemorating the mountain island in the Hebrides from which they came -

'Thy kiss, dear love, on the bens of Jura:

Cold, cold the bens; cold as they thy love."

The little Jura was long sailed by Capt. John Shaw. She was only 96 tons register, but she sometimes got $600 a trip with barley to Oswego. When he sold her she came to grief on the Duckling Bar off the False Ducks. Capt. Case, her master, was sick and the crew abandoned her, carrying him with them. The Jura pounded off and went sailing up Prince Edward Bay by herself. Capt. Wm. Lobb passed her in the C. C. Gearing. It was blowing great guns from the southward and the Gearing, reefed down, was all he could handle, so he had to forego a tempting piece of salvage, and the Jura drove in on The Rock, a prong that sticks up somewhere off Cape Vesey, and broke into staves. Her maintopmast washed ashore fifty years ago, still serves as a flagpole above the headland.

The Lowland Lass was a schooner of 100 tons owned and sailed by John Pontine. She was built at Catfish Creek, which appears to have been the old name of Port Bruce, on Lake Erie, in 1852.

The Highland Beauty got her name from the Chisholms of Oakville, although she was principally associated with other than Scotch owners -- the Williams family and the Quinns.

There were two Bonnie Doons - little one of 18 tons, built at Port Huron in 1857, and a larger one, built at Milan, Ohio, a year earlier, by what must have been a Scottish firm, Merry and Gay. She was a two-masted schooner of 250 tons or so, and was wrecked on Bois Blanc Island in Lake Huron in the Great Gale of November, 1869. Her crew of ten men reached the uninhabited Michigan shore and started to walk to Escanaba, 225 miles away, through heavy snow. After they had gone four days they were in doubt as to which course to take through the wilderness swamps, and eight of them turned back. Two, Reynolds, a sailor, and Collins, a fisherman, decided to go on. The eight found an Indian guide, and tried to recover the lost pair, but the Indian assured them that if they had continued on the way they were going they would never be heard from; nor were they. The survivors reached Escanaba after great hardships about the middle of December.

In the same gale, in the Straits of Mackinaw, was lost with all hands the last full-rigged brig on the lakes. This was the Robert Burns, of 307 tons register, built at Port Huron by Pangburn, in 1848. By a full-rigged brig we mean a two-masted vessel, square rigged on both masts. This rig was rare on the lakes after the var vessels of 1812 were laid up. I have only the record of one other, the full-rigged brig Liverpool, sailed by Alexander Muir in 1845. We must have some more about her, one of these days. Brigantines, vessels square rigged on the foremast and fore and aft rigged on the mainmast, were numerous enough on the lakes 50 or 60 years ago, but they, too, died out long before the last schooner vanished.

The Orkney Lass was a Scotch named brigantine, built at Kingston in 1856 by George Thurston, and owned by Wise and Pope, in Toronto.

The Garryowen was a barquentine, square rigged forward, with two fore and aft rigged masts. She was built by George Ault at Kingston, in 1856, and first christened the Stork. She was owned by William Myles in Toronto in 1864. Capt. Joseph Williams, of the Highland Beauty family, was telling only the other day of seeing her sunk in Lake Erie in the '80's, lying partly on her side, with only her topmast heads and the topgallant yard showing.

The Lochiel, another Scotchman, was built at Port Sarnia in 1853. Tom Neil was the master of her and Robert Steele the builder. She was owned by James Colman and Co. of Dundas, and traded there when that highway town was a lake port. She had her cabin trunk and, compass washed overboard before attempting the entrance to Oswego Harbor in a hard gale on November 4th, 1856. She struck the bottom coming in, and had a man killed and knocked overboard by the foreboom jibing. The Lochiel was christened the Three Seas when she was first launched.

Highland Chief was built in Port Credit, but hailed from Frenchman's Bay. She was lost on the boilers of the sunken steamer Monarch off the Eastern Gap, Toronto, September 20th, 1873. Highland Lassie was a sloop, built at Milburn, Ont., 1879, and registered at Kingston. She was one of the Bay of Quinte traders, and for a sloop was large, long and narrow— 85 feet on deck, 17 feet beam, 4 feet 7 inches deep in the hold. She registered 45 tons and could carry about 100.

The William Wallace was a 60-ton schooner, owned by George Wallace, Whitby merchant, and by William McCabe, who sailed lier. She was built in 1848 and was lost with all hands in October, 1857, comming around Toronto Point. Some believe that the ancient wreck still in evidence on the Island shore opposite the lighthouse is that of this vessel.

There were several Caledonias. One was built in Port Credit in 1842 by Capt. John Randall of Oakville. Capt. Robt. Moody of Toronto owned her in 1856. She was later lost on the beach near Oshawa. Another Caledonia was built at Port Union in 1851. She was a smaller vessel, 95 tons register, and Hallowell & Heatherington owned her. Still another Caledonia, of 61 tons register, was built at Saugeen, or Southampton as it was later called, in 1843. She was sold to Americans and was the only standing keel vessel on Lake Michigan. She gave 60 years of service. It was 1901 when she was laid up finally and she was then still sound. She is credited with having made two voyages across the ocean with salted fish, as well as having sailed 100,000 miles in fresh water.

The Thistle was one of the fleet of Canadian lake schooners which crossed the ocean with square timber from Sheboygan to London in 1875.

There was more than one schooner Scotland. An early one was owned by William Savage at Kingston. She was rebuilt in Toronto in 1848 from the hull of the steamer Burlington, built in Oakville, 1836. She measured 154 tons. Another Scotland was built at Brockville in 1863 by William Saunders. She was a large river barge of 448 tons register, but was fitted with a centreboard and completely rigged like a three-masted schooner.

The five Muir brothers of Port Dalhousie, captains all, and founders of the drydock and shipyard which continues their name to this day came from Hayocks in Ayrshire. It is noteworthy that, although many anecdotes attribute "braid Scots" speech to the Muirs, there was no trace of the Scottish burr in their language, although Alexander, the eldest, was audible everywhere in Port Dalhousie if he chose to speak. Their first schooner was called the Ayr, the remainder of their extensive fleet, with the exception of the Niagara and the Margaret A. Muir, all had names beginning with the letter A. The Muirs were too hard- headed to listen to superstition, but in this day Lunenburg fishermen strive hard to get a name for a new vessel with three A's in it. It's lucky. Hence the Parana, Delawana, Amaretta and so on, all with "of Lunenburg" on the stern.

"There were Giants in This Days" - And Now, too

Though these samples are not all Scots.

Every man in this group scrapes the six-foot mark when he comes up the hatch. "Billy" Langworthy, Port Arthur's Crown Attorney, looks like a mascot, sandwiched in between W. J. Palling, six-foot six, and Wm. Morton, six feet-not-much-less.

"You could not beat the bunch on the North American continent," declared Capt. Jas. McCannel, modestly, when this picture was taken on board the C. P.R. steamer Assiniboia at Fort William last September. Capt. McCannel and his purser, George Bethune, and his chief engineer, William Struthers, are in the 5-foot-10 class. He is quite right in his evaluation of these worthies. They are the men who have made Canada what she is.

Take William Palling, once a member of the Toronto police force, and for three decades the Solon of Fort William, until retired a few weeks ago by the Hepburn headhunt. Magistrate Palling was one of the surveyors in the Rocky Mountains long before the C.P.R. went through, when the wooly west was filled with fighting Indians, buffaloes and cowboys. He was born in Simcoe County. At the end of one November, after surveying the route for the C.P.R., the party was at the far end of nowhere in the Rockies. They decided to walk home. They spent the winter on the open prairies, sleeping under the snow every night, and walked into Winnipeg in March for the pay-off, hard as nails, and each man twenty pounds heavier than when they started west.

And there is Neil McDougall, now nearly eighty, and lithe as an Indian: onetime employee of the Hudson Bay Company in Labrador and in Fort William, and known on all the frontiers. He stretched the first telegraph wires from Fort William to Winnipeg, and made the journey between these places four times on foot. He went to Egypt in charge of the Lake Superior Indians to the relief of General Gordon, hemmed in in Khartoum.

He speaks the Gaelic, Engish, Indian and French, and knows how to handle the red man. A boy from Middlesex County in old Ontario. He won the first road race the Fort William Times-Journal pulls off annually on the 24th of May, and the only time he has missed it was when he was in Egypt. On portages he could always carry the biggest load of any. For years he has been in charge of the bungalow camps at Nipigon. 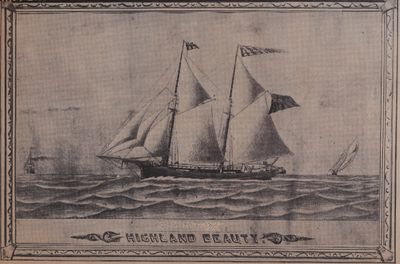 There were giants ...
Groups of Related Records