DOWN in the little cemetery at South Bay, in Prince Edward County, you will find the grave of Let McCrimmon, and a mile from it, by the waters of South Bay, whipped to a dark blue under the lash of the winds of these keen December days, lie the keel and ribs of the schooner which was the last thing Lester McCrimmon saw in life.

This was the old Fleetwing, from which he was drowned on April 21, 1893, a simple tragedy which still stirs Prince Edward County in the remembrance.

The Fleetwing herself or what is left of her, lies on the shore, near the Port Milford canning factory. Her last trip was made in 1910, when she brought in a jag of coal for Church Brothers, at the cannery, after limping about the lakes for a few years, kept afloat by her pumps and south shore cargoes of cedar posts from the Bay of Quinte. I remember seeing her off Charlotte in 1906, a dingy old box with a hogged sheer, faded green paint above a red bottom, a permanently reefed mainsail, and all the external evidences of a last-legger. Soon afterwards she came into Toronto with fourteen inches of water on her keelson and a badly scared crew. She survived both and was overhauled and repaired. But Capt. Frank Duetta, her last owner, realized that she would not wear forever, and stripped her and scrapped her after her canning factory coal had been unloaded. So vanished a vessel fraught with fate, though she had been a fine ship in her time.

Let McCrimmon joined the Fleetwing — then a smart looking schooner, black above and green below — in the spring of '93 and helped fit her out at Brighton where Captain Shaw and Jas. Cochrane, who owned her together, lived. They sailed in her for Oswego, where she loaded a cargo of 350 tons of coal for Swift and Co. in Kingston. Her crew at this time consisted of Capt. Malcolm Shaw, master; W. A. Dewey, mate; James Cochrane, R. M. Snelgrove and H. L. McCrimmon, sailors; and Mrs. Shaw and her daughter, who did the cooking. The Fleetwing had a fine run over from Oswego and arrived off Nine Mile Point on Simcoe Island in the evening of April 20.

It was a cold raw spring, and there was ice in the channel leading to Kingston, so, leaving the mainsail hanging, Capt. Shaw anchored and waited for daylight. The wind was northwest.

Through the night the wind shifted and kept switching between south and west, blowing in vicious puffs. Disliking his anchorage, Capt. Shaw turned his crew out in the blackness of very early morning, and hove up. The decks were like a skating rink with frozen water and slush, for nearly two inches of snow had fallen in half an hour. The Fleetwing was iced up like a Polar exploration ship. When they got the anchor off the bottom they gave her three jibs, to run her for Kingston.

Just as they did so the wind, which had been west, came from the south in a heavy puff. There was a dim red light on Snake Island then, and it loomed up dangerously close under the bows. Capt. Shaw ordered the crew to take in the mainsail, which threatened to drive the schooner on the island, and he himself went to the job with all hands, leaving Mrs. Shaw, who had also turned out, at the wheel. The crew, all lashed up in oilskins against the April cold, had a terrible time slithering about on the ice-glazed deck and cabin-top and bulwarks as the slatting sail flapped and bellied in the gust. While they were all hard at work, booting and fisting the frozen canvas, the sail jibed, that is swung over violently from one side to the other before the wind, and Capt. Shaw hoard a cry, "Help - I'm overboard - captain!"

Mate Dewey and the sailor Snelgrove leapt into the yawlboat at once and Cochrane ran to help the captain lower away. "Oh, it's Let that's gone!" they all exclaimed together as the gleam of the binnacle light from the cabin window revealed the little group at the taffrail to one another. It was so dark that till that moment they had not been able to learn who was the missing man and who were on board.

As soon as the yawl's tackles were unhooked, Capt. Shaw, with the help of his wife and the one remaining sailor, tried to bring the Fleetwing to anchor. Slithering over the iced deck they let the small anchor go, but the Fleetwing ranged ahead and snapped the chain cable. Then with great difficulty they got the big anchor over. The schooner slowly rounded up and dragged for a quarter of a mile and stopped. Simcoe Island was then four hundred yards away.

They waited anxiously, peering into the cold blackness, hoping for a reassuring hail from the yawlboat. None came. At length they heard the scuffle of water and the creak of the oar in the sculling notch. Capt Shaw swung the lantern over the side.

"There's only the two of them," said he, summarizing the tragedy.

Silently the yawlboat came under the stern and they hooked on the tackles and hoisted her up.

"No sign of him," Mate Dewey said. "We searched around, hoping he'd have been able to reach an ice cake and cling to the edge, but he couldn't. His long rubber.coat must have pulled him down like an anchor."

"It'll be many a long day before we get a better man than Let McCrimmon," said Capt. Shaw. "Never took a drink in his life, and a nondrinker will always have the pick of the bunks with me."

They all recalled, as the schooner ran towards Swift's dock in the gray of the morning, how attached Let had been to his young wife, Cynthia Preston, daughter of Henry Preston, South Bay farmer. Each season, while Let was sailing, Cynthia lived with her parents on the' farm. But as soon as he would get back in the fall of the year they would move into the little house of their own for the winter.

They had no children.

As the Fleetwing, with her fly at half mast, got her mooring lines out, the schooner Eliza White could be seen driving in from Snake Island under short sail. She was loaded with peas for Richardson and Co., from Cobourg. When she got to the elevator her captain said he had never had such a bad black night in the lake in all his life. He couldn't see his hand before his face for the snow and darkness, when he glimpsed the light on Nine Mile Point he had let go his anchor and had dragged all the way across to Snake Island, when he hove up with daylight and let her run for Kingston harbor.

They found Let's rubber-coated body soon afterwards near Simcoe Island and brought him to South Bay for burial.

What happened poor Let McCrimmon was recalled recently by a letter from Stephen Dulmage of South Bay in the Picton Times. Mr. Dulmage mentioned that one April 31 years ago he drove his father to Picton, to take the train for Cobourg, with John Seelick and Weldon Gallagher. They were all going to ship in the fore-and-after William Jamieson, then fitting out in Cobourg under Captain Charlie Wakely, of Port Hope. Let McCrimmon went with them as far as Brighton, where he was to join the Fleetwing, which Capt. "Mack" or Malcolm Shaw was fitting out. Let's brother, Capt. Neil McCrimmon, sailed the schooner Two Brothers. Mr. Dulmage remarks that all four men have since passed on, three of them while following the water. Seelick was drowned in the Emerald mystery.

REEFING THE MAINSAIL—A snapshot kindly lent by Mr. Frank Guy, showing the crew of the Flora Carveth at work in a manner recalling the "Let" McCrimmon tragedy. 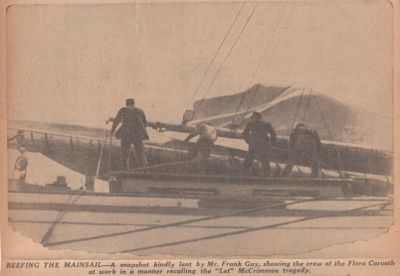