BLUENOSE in picnic garb out of Toronto last summer gave little indication of what she has to go through when she's in overalls on the banks. Big salt-bankers like her lay up for the winter in Lunenberg and the Nova Scotian ports, but the smaller fresh fishermen stay with the bitter game all the year round.

The fresh fishermen do not go so far offshore as a rule, and they do not salt their catches. Otherwise their methods are similar to those of the Bluenose on the banks. They heave to, or anchor, and send out their dories to trawl for fish in a mile wide circle around the parent vessel.

How strenuous their job is may be learned from this letter to Mr. F. T. James, president of the F. T. James Co., Limited, Toronto, from the Lockeport Co., Limited, producers of much of our Atlantic fish foods. The letter is in response to Mr. James' heartfelt message of sympathy to a fishing captain whose little boy had died, and to the relatives of the fishermen who were lost in a December tragedy of the Nova Scotian coast, dimly reported in long distance despatches. For my part, I noted it principally from the curious name of one of the vessels—"Dot and Hellie."

Those lost, writes the correspondent. "were peculiarly enough all French chaps from up around Wedgeport and the Pubnicos. There was an additional one from the same district lost from Alex Blades' vessel, the Marion and Emily, fishing for Swim's. As a matter of fact, it was only the grace of God and most astounding luck that there weren't ten or twelve men lost that afternoon.

"It was a fine clear day with a light easterly wind blowing, and along about three o'clock, I guess it was, the snow shut down with a bang.

"Gordon McKenzie was not on board the Dot and Hellie on account of his boy's operation, and his place has been taken by Captain Collupy. He is an old salt fisherman; spent about fifty years as skipper out of Gloucester and Lockeport in the salt fishing days, He told me he never experienced anything just as bad in his whole career. He said the snow came across the surface of the water in a bank about twelve or fifteen feet high. The wind came with it and just completely blocked everything out.

"The Dot and Hellie was at the lee end of their string of dories (she was double-dorying), and I have forgotten just which dory it was that these two men, who were lost, were in; but certainly it was one not very far from the vessel. Some of the dories farther up to windward cut their gear and started for the vessel and ran into this dory with the two Frenchmen in it who were still hauling their trawl. They said:'For God's sake cut and come. Where's the vessel?' The two fellows lost I gave them the exact direction of her. 'For God's sake cut your gear and come', they repeated, but these boys said: 'Oh, no, we're all right'. That was the last that was seen of them.

"The wind continued to increase very rapidly in velocity and within a short time there was a howling gale, and the men were never seen afterwards.

"Capt. Collupy stayed out with the Dot and Hellie until late Sunday looking for them but without success. We had a Government cutter sent out from Shelburne with similar unfruitful results.

"Three of the other Dot and Hellie dories got astray. They were in a huddle together and their crews were just making arrangements to abandon one of the dories and three men get into each of the two that were left and try to start for shore, when the Dot and Hellie almost ran them down in the snowstorm and that is the way in which these six escaped.

"She was fishing, by the way, on the very southwest tip of Roseway Bank and it was very much worse weather off there than it was close to shore, although it was bad enough here; you couldn't face the snow on our wharf at all.

"I was out in the greater part of the afternoon, because we were discharging a salt cargo from a large three-master, and we were afraid that as the easterly increased in force, the vessel would break our wharves to pieces, and we were trying to get her out into the stream, but we were unsuccessful.

"To give you an idea of the weather, I froze the whole right side of my face and it is just as sore as a boil ever since. When that would happen to me on our wharf you can imagine what it must have been like in a dory twenty miles off.

"Captain Coutreau, in the Lucille M., was fishing about seven miles southeast of the Lockeport Groaner. The man he lost went out in the dory that afternoon with nothing but a suit of silk B.V.D.'s and his rubber clothes right over them, and the last thing he did before leaving the vessel's side was to throw his dory sail back, and say he wouldn't take it. One of the other dories ran into him in the mix-up that ensued after the snow squall started, and begged him to cut and come, but he wouldn't do it. and that was the last that was ever seen or heard of him.

Several of Alex Blades' dories got astray and he didn't find them until 7 o'clock that night and then just as in the case of the Dot and Hellie, by pure accident. The reflection from his masthead light just spotted the side of a dory and the next moment he crashed into them. One man was drowned in the collision when the vessel ran his dory down. They managed to save the occupants of the other three or four dories that were in the huddle.

"The wind continued to steadily increase in velocity and it was a howling gale and raging snowstorm most of that night and Sunday.

"The Dot and Hellie lost about $300 worth of gear. Ordinarily this is up to the crew, but in this case I simply called in the skipper and told him that the vessel was bearing the shot, and that I wanted him to understand that in any instance where it was a case of men's lives, or loss of gear, that we were taking the responsibility for the gear. I was certain that you would approve of this policy.

"I have communicated with the local member of the Legislature in the district where the men belonged. I have also talked to the parish priests of the parishes in which the men lived. I am having the investigator for Mother's Allowances make an investigation of the families at once and report to me; and everything that can will be done to see that the widows, and children are properly provided for with the least possible delay. It certainly was a bad finish to the year for Lockeport."

AND THEY SAY SALT WATER WON'T FREEZE! — Atlantic Fishermen on Arrival in Port This Winter 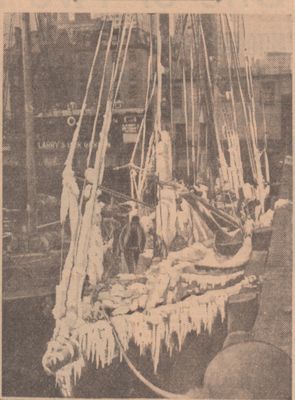 Atlantic Fisherman on arrival in port
Groups of Related Records