HAVE you ever heard of the Nemesis?

Not the Greek idea of retribution, but the Lake Huron schooner of that name?

I hadn't, either, until friend Albert Leeder, of 116 Milicent street, who sailed in her fifty years ago, came in and told about her.

This Nemesis was, appropriately, painted as black as the midnight of vengeance the Hellenic deity suggested. A figure-head carved like a Chinese dragon, with gaping jaws and gnashing teeth, made her seem the embodiment of wrath when she was storming through the water. Her stem was straight, up to the cut-water knee from which the dragon sprang, and she was low and rakish and two-masted. Altogether, in appearance she was a proper pirate barque, and one could expect the skull-and-crossbones at her main-truck. But she was, in reality, a most peaceful craft, principally engaged in the prosaic and profitable trade of carrying cedar posts and cordwood from the Georgian Bay to Goderich or Detroit.

This was in the great block-paving era of civic development in Canada and the United States. Remember those old smelly, bumpy, rutty pavements of cedar blocks, which replaced the original mud roads and macadam, as the lake cities grew from country towns to metropolises — if that's the plural? They were all paved with cedar for a while, but the while was not a long one. Theoretically cedar is imperishable. Practically it went to the dogs in five years, under the scorching suns and winter frosts and continual wettings and dryings of city service, in the trying days of horse traffic and watering carts. London gets along well with wooden blocks, squared and chemically treated, and laid on concrete. But the cedar block cargoes which the Nemesis and a hun-red other schooners carried got title treatment beyond the buzz-saw. Sometime they were "laid" without even the bark being removed, and often with no "bottom" but a sprinkling of sand over the native mud. No wonder they didn't last.

But while the block-paving craze as on paving contractors made fortunes and vessel owners did well carrying forest products to the growing cities. The Nemesis was one of the fleet in this trade on Lake Huron. She probably hailed from Southampton, then of great importance as a harbor of refuge, although she was owned in Port Elgin, five miles away, a little place with a small but snug cove, home of many hookers in the sailing days.

Old Capt. John Spence, of Southampton, sailed the Nemesis, with his sons as crew. She was not a large vessel, perhaps seventy feet long, and sometimes Capt. Spence would sail her with only one of the lads and himself. Shorthanded this way they were caught off Goderich by bad weather one night in Lake Huron. While getting the canvas off her the mainboom or foreboom jibed, and knocked the boy overboard, and he was drowned.

It was a cruel time for the father, unable to even signal for help from the town of Goderich, where the lighthouse shone imperturbably across the dark waters. The wind was off the Canadian shore, and the Nemesis, beyond the control of the old man, drove helplessly across the lake before she fetched up on the shore at Sand Beach, Michigan (now Harbor Beach) the following morning.

But a happier experience for the grim-named galliot was when Capt. Spence had all his sons with him, in 1877 or thereabouts, and the Nemesis, running before a strong northeaster, sighted a steamer's lifeboat in the troughs of the Lake Huron seas. The steamer had gone down in the night, and the crew were barely able to keep the crowded lifeboat from swamping.

The waves were running so high that it was impossible to bring the Nemesis alongside the lifeboat, or for her to take it in tow. The boat would have been crushed or swamped, and all the crew drowned. So Capt. Spence steered his little schooner so as to run past the lifeboat, and as she did so the boys made a grab and hauled on board one of the suffering crew. The Nemesis was then worked to windward until she could again run down past the lifeboat, and another man could be picked off. This hazardous manouvre was repeated again and again, until all hands were hauled out of the water-logged craft. But one man was drowned. He was a fireman from the steamer, and he was so overcome with the exposure that he could not help himself or his rescuers. He fell between the Nemesis and the lifeboat while they were trying to haul him on board, and sank like a stone.

The rescue was so outstanding that it received international recognition. Gen. Ulysses S. Grant was then President of the United States, and he had a gold watch suitably engraved for presentation to the captain of the brave Canadian crew. The presentation was made in the town hall at Port Elgin, and, as Mr. Leeder. then a Port Elgin schoolboy, modestly says, "was quite a social event." One of the sons of Capt. Spence is still living in Kingston. Perhaps he has particulars of this rescue; perhaps a picture of the Nemesis. Mr. Leeder does not remember the name of the American steamer which was lost.

Mr. Leeder went sailing in the Nemesis as soon as he was big enough. At this time she was in the cordwood trade from the Bruce Peninsula to the salt blocks at Goderich, a run of about a hundred miles.

Another vessel in the same trade was the schooner Mary and Lucy. "I knew her very well," said Mr. Leeder, "and we were often in company. One trip the Mary and Lucy loaded pine lumber from the Georgian Bay for the foot of Lake Huron. When off Chantry Island light at Southampton the wind, which had been easterly, suddenly changed to the northwest and blew such a hurricane that the Mary and Lucy was completely unmanageable. She drove helplessly on to the reef south of Chantry Island, and struck, the seas bursting over her, and her crew taking to the rigging to avoid being washed overboard.

"Some time through the night the steamer Manitoba, a side-wheeler of the then Beatty Line, ran in for shelter. Daylight revealed to Capt. Sims, her commander, the Mary and Lucy pounding to pieces on the reef close by. He lowered one of the Manitoba's boats, and, getting in himself, with his purser and Ross Lambert, the son of the Chantry Island lighthouse keeper, pulled away for the wreck. As the rescuers neared the reef a huge sea, bigger than all the others, piled in and burst around the Mary and Lucy with such force that it lifted her clean over the reef into the deep water between the reef and the mainland, with her crew still in the rigging.

"The pine lumber in her straining hull kept her afloat until she grounded on the main shore, a complete wreck, with her spars still standing. She never floated again, but her crew got off safely.

"But alas for the brave rescuers! The seas which had such power as to pick up a loaded schooner and toss her bodily over a reef rolled the steamer's lifeboat over and over like a barrel. It, too, was washed over the reef and drifted towards the main land, with the three men clinging to it. First the poor purser let go; then Ross Lambert, the lighthouse keeper's son. When the upturned boat grounded, near where the hulk of the Mary and Lucy struck, only Capt. Sims was alive."

Torontonians of thirty or forty years' standing may remember the Manitoba, although they may never have seen the name on her paddleboxes. She was built at Thorold in 11871, and first ran in the Beatty Line, out of Sarnia. Later she was with the Cambria on Lake Huron and, Georgian Bay routes for the C.P.R. In 1890 Toronto knew her as the Carmona. She had been brought here for what was expected to be a great excursion trade, between Toronto, Lorne Park and Grimsby. This was early in the summer cottage commuting era, when the urban dweller was founding summer settlements and going back and forth by water. There was not enough business for the Carmona, ex-Manitoba, and after free-lancing with moderate profit for some seasons she was laid up. Last I saw of her she was being dismantled at Port Dalhousie, in 1904.

Mr. Leeder was born and raised on Lake Huron's shore. His father's old farm house near Port Elgin overlooked that noble lake. On the east shore, where it stood, was felt the full force of the northwest gales in the fall. "Getting up in the morning the first thing was to look out of the bedroom window over the lake. There was always something under sail in sight, schooners or fishboats passing. We had some beautiful schooners on the lakes in those early days. Though intended for the carriage of goods and merchandise they were so beautifully built and kept it would give you a thrill just to look at them."

THE OLD MANITOBA as Torontonians remember her. She was renamed Carmona in her later years. 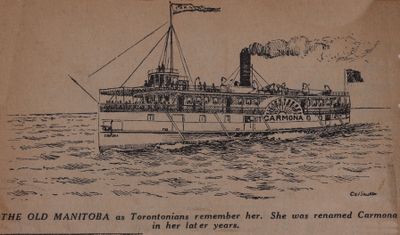