"WHAT happened that single-hander from Norway that dropped in here on her way 'round the world a year ago last fall?" asks an oldtimer of Schooner Days.

Schooner Days, supposedly omniscient, regrets to report that the single-hander is missing on all cylinders, with the cat and the dog, and will never be heard from more.

The single-hander was the Mary Jane, of Bergen, an ex-pilot boat from the coasts of Norway. She was here in September, 1933, manned by a likeable young fellow named Al Hansen, and a likeable black dog named Mate, and a likeable grey kitten named Sailor. Sailor was an orphan, born on board, and bereaved of his maternal parent at Detroit.

The Mary Jane was a most untempting thing to take a world cruise in; one stumpy mast amidships, twelve inches through at the deck; two heavy sails, as thick and stiff as carpets, and a third a little lighter; and a little square dog kennel of a cabin, kept as neat and clean as a sergeant-major's buttons. In shape she was like a long pointed melon split in two. Her rudder was outboard, like a skiff's. A round open rail, about twelve inches above her flat deck, could not keep out the water, but gave some handhold or foothold to prevent the skipper going overboard.

This Viking ship came here on her way from the Chicago World's Fair, and sailed onwards from the Terminal Warehouse at the foot of Bay street on her world-girdling voyage on Wednesday, September 27th, 1933. She made a slow passage to Kingston, and was next heard of in Halifax, where she put in after some very heavy weather.

Hansen was then on his way to the West Indies with his boat and his dog and his cat—and he got there.

What his landfall was is as much a matter of speculation as Columbus' first, but he had to cover almost as much ocean in his thirty-six-foot melon skin as Columbus did in his hundred-foot Santa Maria, with the Pinta and Nina to help him. Hansen steered through the islands to the Panama Canal, passed through that, and entered the Pacific. Maybe he was going to try around the world east-about, with the roaring west winds of the Pacific to push him past Cape Horn and across to Africa. Or maybe he was going to strike west for Easter Island. Whatever his plan was, he clung to the western coast of South America, as he headed south, and he got as far as a place called Ancud, in the northern part of Chile. The poor fellow was circumnavigating the world on a very slender shoe string, and he probably put in here to sell a few dozen post cards, as he did in Toronto.

From Ancud he sailed for Santiago, fifteen hundred miles down the coast, under the frown of the snow-capped Andes. Two or three days after he left this port a hurricane swept Chili, from Arica to Cape Horn.

It would be the traditional thing to say that everybody wondered how Hansen fared, but it is probable that no more people sat up at night in Chili, worrying over the barnstorming single-hander, than lost sleep over him in Toronto after he sailed out of the Eastern Gap. (We had some bad weather just after that—and the chances are this is the first you've heard of it.)

But the Chilian Government did have heart enough to send out a gunboat to look for him when the hurricane was past. The gunboat looked and kept on looking for nine weeks, and found no trace of the Mary Jane, or the cat or the dog or Hansen.

Then, last month, some wreckage was picked up at sea, and identified as part of the ex-pilot boat, and it became certain that poor Hansen had drowned months before, in the hurricane. That's what happened him.

Columbus was able to cross the Atlantic on the Queen of Spain's jewels, catalogue value $14,000, but it doesn't follow that you can go around the world on a picture postcard and keep your feet dry.

That was what poor Hansen was attempting. This Mary Jane of his had been a good boat, quite as big as one man could handle, and she was very strongly built; but she was old. That was the trouble with Captain Joshua Slocum's Spray. She was about a century old when he started around the world in her. He completed his first voyage, but was lost on the second or third.

When the Mary Jane lay at the Terminal Warehouse here those who went below in her marvelled at the size of her timbers and the thickness of her planking. She was only twelve yards long. A strong yacht of that size would be framed with one-inch ribs and covered with seven-eighths-inch planking. The Mary Jane's skin was oak two inches thick, her keel was ten inches wide, and her ribs were seven by nine inches square. She was more heavily built than an ice-breaking tug.

Dimensions alone do not give strength to wooden vessels. Strength is gained from their proper application and distribution and proportion, from the method of their fastening, and from the soundness of the materials. Heavy unsound timbers, poorly fastened, are a weakness instead of a strength: they come apart by their own weight in the stresses and strains and buffetings every water-borne hull is continually enduring.

The May Jane was undoubtedly well fastened originally, but she was built a generation ago, and in the period the metal may have crystallized or corroded, and she may have become nailsick, as the expression is. Her innumerable fastenings in the million vibrations of years of sea-shocks may have enlarged their holds until they no longer held tight.

What is more probable is the dry rot had been gnawing at her for years. This enemy, more deadly than the shipworm, thrives where the ventilation is poor. Less air usually gets into heavily framed and planked vessels than into small light ones. The chances are that the Mary Jane was far gone with dry rot without Hansen knowing it. Even if he had known, there was not much he could do about it. His sole means of defraying his expenses were lectures, magazine articles and picture postcards. Ten cents for autographed photographs of himself or the boat and dog and cat was his modest charge. It would take a lot of autographed photographs to pay for a dry-docking and overhauling of the Mary Jane, and she probably needed an entire rebuild by the time he got her back to salt water after the thousands of miles of fresh water which had passed under her keel.

Hansen came across the Atlantic from Bergen to the Gulf of Mexico and got towed up the Mississippi to Chicago on a mixture of picture postcards, pleasant conversation, public good nature, and luck. But when his mainmast went back on him in Chicago—dry rot was the trouble with it—he was stumped until Chicago yachtsmen chipped in and bought him a new spar. He did all the work on it himself, but the new mast cost $250—fifty times what the Mary Jane's original spar cost in her native Norway. It was the only new thing in her when she was here in Toronto, but was not the only new thing she needed. Her outfit in general was heavy and worn; about what you would find in a well-kept stone hooker when times were good on the lakes.

Mary Jane is about the most innocent name one could select for any craft, and a black dog is about the most innocent accompaniment with which any ship could sail. Yet here is a coincidence, which you can take for what it is worth. The Mary Jane of St. Catharines was a lake "barque" which vanished with all hands after leaving Port Colborne with a cargo of cedar posts in the 1880's. From that day to this she has never been seen. But survivors of Schooner Days still shake their heads over the tradition which persists that just before she sailed from Port Colborne a shaggy black Newfoundland dog "with lolling tongue and eyes of fire" ran across her deck and disappeared.

THE MARY JANE OF BERGEN leaving Toronto for the other side of the world, Sept. 27th 1933. 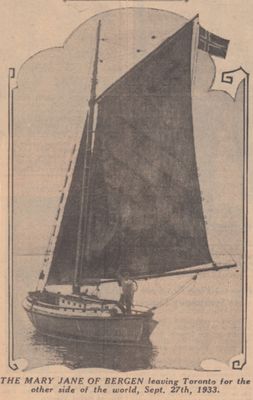