Some of the Sagas of the Port Burwell Fleet, With a Glimpse at Early Ontario Mercantile Enterprise

"THE first name which I can remember," says T. H. Mason, of the vessels he saw launched in Port Burwell, "is the Homeward Bound; the first two large schooners I remember seeing launched were the E. P. Roe and the D. M. Cornwall. They were sold to English firms, and one of them was wrecked on the coast of Africa; the product of Port Burwell's shipyards went far field in those days."

The Edward Blake, another Port Burwell vessel, went to London with squared timber from Lake Michigan, and then made a voyage to Rio de Janeiro and back to London or Cardiff, before coming home. She was ultimately wrecked on the Duck Islands in Lake Huron.

The name "E. P. Roe" suggests the reverend gentleman who used to be very popular in the Sunday School libraries fifty years ago, with his "Opening of a Chestnut Burr," "From Jest to Earnest," and so forth. But the schooner Mr. Mason mentions was probably named after a member of the family of the Roe Brothers, of St Thomas, where Mr. Henry Roe is still engaged in general insurance.

Roe Brothers had three stores in the Metcalfe Block, at the southwest corner of Metcalfe and Talbot streets, St. Thomas, seventy-five years ago. On the corner they sold groceries and liquors, next to that hardware, and in the third store dry goods. They were typical pioneer merchants. Mr. John Roe and his family lived over the stores, occupying the second and third storeys. He later bought a fine residence on Metcalfe street. His brother, Mr. Charles, father of the insurance gentleman, came to St. Thomas in 1842, and was active in its civic and mercantile affairs for many years. Mr. Peter Roe had a fine mansion at the foot of Blackwood's Hill. He conducted the grocery department.

The Roe Brothers, besides conducting a general merchandise business, dealt in grain, lumber, wool, pork, etc., on a large scale. They bought and shipped grain from Port Bruce, Port Stanley, Tyrconnell and Morpeth, all on Lake Erie, and had branch stores along the shore. They were also vessel owners.

Their first venture in shipping on the Great Lakes was in the purchase of the propeller Banshee. This vessel was lost on Lake Ontario in the season of 1860. She sprang a leak and sank near the Duck Islands near the entrance to the Bay of Quinte, and the crew all getting ashore on one of the islands.

They next bought the schooner Josephine. In 1861 they built at Port Bruce, a near neighbor of Port Burwell on Lake Erie, a three-masted schooner named the Mary Roe, named after the first child of Mr. and Mrs. Charles Roe.

The launching of the Mary Roe was quite a ceremony and all the employees of the firm that could secure conveyance from St. Thomas and elsewhere were on hand to witness the occasion.

On completion, the vessel was engaged in the grain carrying trade. At the close of the season on the lakes she was chartered to take a cargo of square oak timbers across the ocean to the Port of Hamburg, Germany, and did so successfully, returning in the spring. This was a very successful and profitable trip.

At the close of the following season on the lakes the vessel was chartered to carry a load of lumber to the Port of Natal, South Africa. She was to load here at the Port of Toronto. Entering the port in the night, the captain made a mistake regarding the harbor light and the vessel went ashore at Hanlan's Point, and while, after considerable delay, she was floated off the beach, she had to go into drydock for repairs. As it was nearing the close of navigation on the lakes, the firm chartering the vessel cancelled the charter. This was a great loss to Roe Bros.

"The superintendent of construction of the Mary Roe," writes Mr. Dan Ferguson from Victoria, B.C.— he was as a lad, in Roe Bros.' employ—"was Aaron Kilpatrick. I suppose he must have been a ship carpenter, although in St Thomas he was a house builder. During the building of the vessel he went back and forth between St. Thomas and Port Bruce, going down to Port Bruce on Mondays and returning to St. Thomas on Saturdays. He was returning one Monday morning to the port when running along by the side of the road he spied a little animal and he said to the driver of the buggy, "Oh, look at the pretty little thing." Kilpatrick 'was not long out from Ireland and was not acquainted with the different variety of wild life in Canada. He had the driver stop and let him out so he could try and catch the pretty little beast. It was a skunk, of which fact Kilpatrick was soon made acquainted. It was the last time he wore that suit of clothes and it was many a day before he heard the last about his efforts to catch 'the pretty little thing.'

"The master of the Mary Roe was not Capt. May, but a fresh water sailor. May was an experienced ocean navigator and was engaged as sailing master for the ocean part of the voyage. He was not on the vessel when she was wrecked at Hanlan's Point."

Mr. Ferguson recalls a "voyage" he made with the same skipper who got the Mary Roe ashore and lost her charter, when this worthy was in command of the firm's first schooner, the Josephine.

"I have a very clear recollection of my first and only visit to Morpeth. The schooner Josephine was to call there to take on a cargo of wheat. The captain lived in St. Thomas, and he sent the vessel up to Morpeth in charge of the mate so he could have a little longer time at home. One evening Mr. Chas. Roe came to me and asked me to drive the captain up to Morpeth, where the firm had a branch store. So I got out the horse and buggy and hunted him up. H. was not at his home, and I finally located him at one of the hotels drinking with some of his acquaintances, and it was twelve o'clock at night before I got him away, and we started on our fifty-mile ride. When we got there we found the vessel had run up to Rondeau for shelter as the wind was blowing quite a gale from the southwest, and as there was only a dock at Morpeth it would not be safe to make that harbor until the wind shifted. It was two days before the vessel come down to Morpeth. She left without me. I was there some three weeks. It was a dull little village and I knew no one there, and before the firs tweek was gone I was a pretty homesick boy." 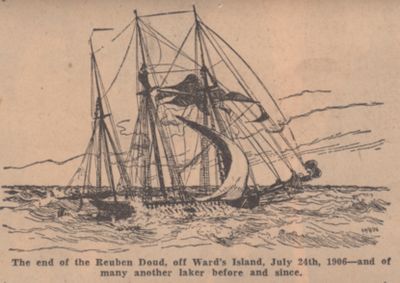