Something of the EDWARD BLAKE, in Which Aemilius Jarvis Ploughed the Atlantic East and South and North 60 Years Ago

WHEN Edward Blake, brilliant Toronto legislator, was approaching the zenith of his career in 1872—he was then Prime Minister of Ontario as well as member of the Federal House—“Big Dan” Freeman, another lawyer, who had gene into shipyards instead of politics, launched his third schooner from his yard at Port Burwell on Lake Erie.

The name of Blake shone as bright in Canada then as the name of Bennett does to-day, and the large Daniel struck the bell with the public when the ripped away canvas revealed “EDWARD BLAKE of PORT BURWELL” on the new schooner’s sternboard.

The Blake, like many another Port Burwell vessel, did not remain at home. She was soon owned or registered in St. Catharines, and soon a chartered in Toronto by Ben R. Clarkson, who had grain elevators at Port Credit.

This Edward Blake which “Big Dan” Freeman built was more famous than the earlier schooner D. Freeman, to which he gave his own name. She was a “full-canaller” as they called vessels of her size and time. She registered 360 tons and was 136 feet long on deck, 23 feet 6 inches beam and 12 feet 2 inches deep in the hold.

It was in the Blake that Commodore Aemilius Jarvis, Canada's greatest yachtsman, sailed as an apprentice sixty years ago on her voyage overseas. This was in 1875. She loaded square timber in Sheboygan, unloaded some at Collins Bay to lighten her for the canals, took on a deckload of deals at Montreal, towed down to Quebec, and, in company with five other chartered vessels from the lakes—the City of Manitowoc, Thistle, W. W. Grant, Jessie Scarth and Thomas C. Street—sailed for London.

They had to carry a pilot from Quebec to Bic, and heartily glad the lake sailors were to get rid of him, Mr. Jarvis says, for he made them anchor every time the tide turned foul, with a tremendous range of chain, and it sometimes took two hours or three of hard heaving to get the Blake’s mudhooks back to the catheads, with the heavy hand-windlass she used.

There were six men in the forecastle in the Blake, and aft were the captain, two mates and cook. Captain Peter Thompson was the master and his son Andy was one of the mates.

Running down the Gulf, Mr. Jarvis recently recalled, the Blake was struck by a following sea which filled up the short space between her taffrail and the after end of her cabin, burst the bulkhead in, flooded the place, and poured out of the galley doors at the forward end of the cabin. It made a terrible mess of the captain’s, cook’s and mate’s rooms; but they shored the burst bulkhead back into place with planks from the deal deckload and carried on.

The Blake was of the usual “full-canal-size” model, with full bows, plumb stem, a bottom that was almost flat, a centreboard to keep her from making leeway, and one pair of timber ports in her stern at the level of the deck and a second pair below, in her counter, to give access to the hold. These were, of course, hinged and bolted inside and thoroughly caulked, both inside and out, before the deckload sank their sills below the level of the water. Also a bulk-s head was built across them, inside, so as to make a watertight compartment in the stern. But they leaked all the time.

The Edward Blake made a long slow passage across the Atlantic. She sailed from Montreal in September and reached London in November, after a voyage of forty-five days; eighty or ninety days, indeed, from the time she first started from Sheboygan with her load. Litigation had held the whole Clarkson fleet at Hochelaga, below Montreal, for nearly a month. But the slowness of the actual passage was due to the fact that with her full model it was impossible to run her in heavy weather, when she should have been making good time. In fact she crossed much of the Atlantic wrong end first, hove to for nine days, nosing towards the strong northwest wind from here which should have been pushing her London-wards at two hundred miles a day. In this period she must have drifted sideways or sternways four hundred miles or more, but to keep her hove to, facing the smiter and sidling off from the billows was the only way to avoid having her swept by the sea as she had been in the Gulf, with the probable loss of the deckload or the whole ship.

Hove to, Mr. Jarvis says, she rode dry and comfortable, for she had a high side out with her timber cargo, and with her shoal draught — she was not loaded much below nine feet—she yielded easily to the sea.

The Blake was rigged for this voyage with her regular lake sail-plan, that of a three-masted schooner with brailing squaresail on rings traveling on a yard, and a three-cornered raffee above it. In England she was re-rigged as a barquentine, her lake foremast being shortened fifteen feet and the gaff foresail taken away. A square fore-course, lower topsail, upper topsail and topgallant sail were set on the new foremast. With this rig Mr. Jarvis sailed in the Blake for Rio Janeiro with a cargo of coal from Cardiff, and came back to London with a load of coffee. While the Blake was being rerigged he had made a voyage to Leghorn and Antwerp in the English barque Surprise, so by this time he was an "old salt,” although only sixteen. He left the Blake when she reached England the second time, and came home by the steamer Grecian, having been convinced that there was more money to be made in banks than in barques or barquentines.

The Blake retained her square rig for a number of years after she, too, came back to the Great Lakes, but she reverted to her original “three-and-aft” schooner style before she passed out—which was in 1896. Capt. Sidley lost her that year on the Middle Duck in Lake Huron, in a gale which polished off the Bavarian and a number of other lake schooners.

But before this, in the ‘80s, the Blake figured in the sensational escape of Chief McGarrigle from Chicago, as told long ago, in Schooner Days, No. LVI [56].

It was as she was passing through the Twelfth Street Bridge, just as shown in the picture which goes with this, that the graft-accused police chief, who had escaped from the sheriff, jumped aboard her. Next morning the white-hulled Blake, painted black overnight, went boiling through the Straits at Mackinaw, unrecognized by the law hounds who were on the lookout for a white schooner. She landed McGarrigle at Sarnia, safe on Canadian soil.

Capt. Sandy Irving was sailing the Blake at this time. It was a recognized ritual for old Sacksy Brooks to hail Sandy after this, when the Blake would be passing up the Welland Canal, with “Where ye bound naow, Sandy?” and for Sandy to reply, “Up to Shycaggo, for another cargo of McGarrigles.”

Sandy did not stay long in the Blake. He denied that he got $10,000 or $1,000, or anything more out of McGarrigle’s passage than a poor coat of paint and still worse publicity. He gave up sailing and settled down on a farm near Banff, and the Blake, as already told, ended her days on the Middle Duck.

COMMODORE AEMILIUS JARVIS, S.S.D., in the royal Yacht Squadron cap bequeathed him by his friend, the late Sir Thomas Lipton. 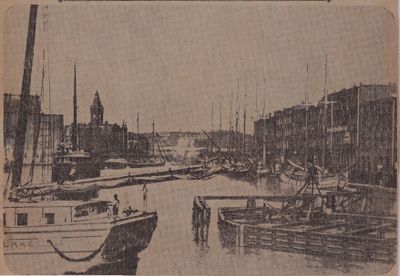