Alexander Muir, Pioneer Lakesman, Tells How it Felt to be Wrecked in Rebellion Times, When Port Dover Hadn't Even a Wharf

AFTER Alexander Muir made the trip to Manitoulin with Indian presents in the schooner Adelaide, in 1838, and brought back to Toronto the brass six-pounders of the Selkirk settlers, to save them from the rebels, as told last week, he made another voyage in the Adelaide.

This was her last. His description of how she was lost, written fifty years after the event, gives another picture of pioneer navigation, and some legal advice worthy of remembrance.

It will be noticed, in his narrative, that he speaks of this schooner, built at Brockville a hundred years ago, having a centre-board—a very early example. Centreboards did not come into general use on the lakes much before 1850; in fact, some keel schooners were built after that. It will also be noticed that he speaks of the schooner having square sails, probably a topsail and topgallant-sail. These were in common use in small vessels a hundred years ago, but vanished and were replaced by gafftopsails.

Also, this was before Port Dover, since well known on Lake Erie, had even a wharf. Grain loaded there had to be ferried out in scows to the anchored vessel.

"The following voyage continues Alexander in his memoirs, "we loaded wheat at Rievson's (Ryerson's?) Creek and Port Dover for the Hon. Hamilton Merritt at St Catharines.

"While at Port Dover lightering the wheat out to the vessel—there were no wharves—there was, as at Hamilton, where we unloaded the Bond Head, a barrel of whiskey on end in the storehouse, and tap in the barrel, so that every one could help himself to what whiskey he thought he required. Both our captain and the mate liked a good horn, and on this occasion may have taken too much while loading.

"After finishing our cargo the weather was very thick and the wind was north-east, so the vessel was run up to what was known as the Deep Hole, at the entrance to Long Point Bay, near Port Rowan. There we anchored all night.

"Early next morning the wind was favorable from the west, so the vessel was got under way and we steered for Port Colborne. The course was given as east.

"I was steering from 10 to 12 a.m. The captain said: 'I am afraid we may be getting near the Grand River shoals. When you are relieved at the wheel give the next man the course as East by South.

"It was then very thick and foggy, and not more than the length of the vessel could be seen. It was Sunday.

"We had all had our dinner and our watch had gone below, when the centerboard struck the bottom. I heard the captain give orders 'Let got the jib sheet! Put the helm down!"

"By this time I was on deck. I found the captain throwing the lead. The mate was at the foretopmast head, looking for the land. The sheets had been hauled aft, and the vessel was on the wind, and when the helm was put down she came up head to wind and brought up on the rocky bottom of Grand River shoals, half a mile southeast of Gull Island. She was within half a mile of the island, but the fog was so thick that no land could be seen.

"We had been heading inside the island, for the invisible mainland, and when she was headed out south she ran on the reef. If the vessel had been put about three minutes sooner she might have been saved with her cargo.

"On this Sunday there was only about a 5-mile breeze, so a boat was lowered, the anchor run astern, and a strain got on the chain. We found the rock so smooth that the anchor would not hold. We had a passenger for Port Colborne, fifteen miles away, so he was landed and sent there on horseback, with orders to the collector of canal tolls to send up a small lighter.

"By dark Sunday night it commenced snowing and sleeting, and the wind changed to northeast Our square sails were set aback to assist in getting her off the shoal, and about eight o'clock as the sea rose she did back off till the chains brought her up.

"The sails were then taken in, and she lay in about twelve feet of water. She was drawing eight feet. We were then sheltered by the east shoal, which was between us and the northeast sea, so the captain concluded that we were all safe till the next morning, if the wind continued to blow from the same direction. As our sails were bad we did not wish to be out in the lake in a snowstorm with them.

"Before this (no assistance having come from Port Colborne) we had sent to the Grand River, not many miles away, and asked assistance from the Government steamer lying there doing nothing. She had just been purchased at Buffalo, and, manned with British sailors, was on the lookout for the Mackenzie rebels. She would do nothing for us. Their excuse was that they had lost their small boats.

"Sunday night the watch was set, and all was made ready to slip the chain and get underway, but about two o'clock in the morning the wind suddenly changed to the west again and the vessel again drifted on to the rocks.

"The wind increased to a gale, the sea rose, and the vessel pounded heavily. In about an hour she was filled with water. We had slipped our chain an hour before this, thinking she might drive over the shoal. She lay on the shoal, heading about west. The sea began breaking over her.

"We had taken our small boat on deck before dark, and she was the means of saving all hands the following evening. The vessel listed a little with her deck to the south. A plank which reached across the upper berths was got into the cabin, and the small stove set up on it and a fire made. We crowded into the berths on the weather side of the cabin, and so spent the rest of a very uncomfortable night, with the seas sweeping over the vessel.

"There was a heavy sea running all next day, and we made up our minds that she would go to pieces in a short time. As we could do nothing with her full of water we wanted to leave as soon as an opportunity offered, so about dark Monday night, the wind having moderated for an hour, we hoisted the boat overboard with the fore and main throat halliards. Our bags were all in, so we got into the boat as soon as possible and shoved off, for there was danger of getting the sides of the boat smashed against the sides of the vessel.

"We rowed for the island and landed safe in a small bay at the west of the island, and as there was a small tackle in the boat we hauled her safe up on the land. There were then several inches of snow on the ground.

There was no lighthouse on the island then. We obtained lodging in the house of a Dutch farmer, just abreast of the wreck. Here I had my first experience of living on two meals a day.

"The wind continued a gale from the southwest the next night, and the next morning we discovered that the vessel was gone. Following down the shore a few miles we saw her floating before the wind and sea, toward the shore. She came in about twelve miles above Port Colborne at Farrier's Point. We cut the lanyards of the rigging, the masts were unstepped, she stayed upright on her bottom, and washed up close to the beach. We found that all the wheat had gone out of her, so we stripped her of everything of any value that could be taken and bade her goodbye.

"One of the sailors named George Todd died some years ago. He left two or three daughters. The cook was Joseph Thompson of Brockville. The vessel was not insured and neither was the cargo. Two years after Mr. Merritt brought suit against the owners of the vessel, H and S. Jones of Brockville for the value of the wheat.

"About the middle of that sea while at Garden Island I was given subpoena and $10 and told to appear at Niagara on a certain day mentioned to give my evidence as to loss. I was then in charge of Harriet Calvin, owned by Calvin, Cook and Counter of Garden Island.

"I was about three weeks at Niagara attending this lawsuit and there were a great many witnesses examined on both sides. Mr. Merritt had more friends in Niagara district than Mr. Jones, of Brockville. The court decided for him. Mr. Jones appealed against this decision and brought the case on to Toronto the following season. It was then decided in favor of Mr. Jones, and so the third year it was settled by arbitration. You can see from this the uncertainty of law, and I want to advise every one to try every means to settle before going into law, for half the time it will make lifelong enemies, besides being a great expense, and in half the cases you will not get justice." 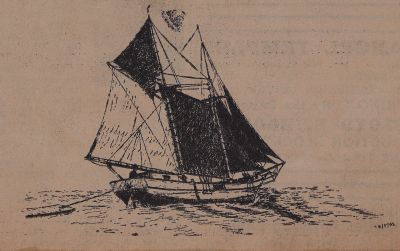