Founder of Port Dalhousie's first drydock, still going strong, continues record of his climb from cabin boy to captain.—The French-Canadian builder who always had a ship on the ways.

AFTER the Adelaide was lost in Lake Erie in the fall of 1838, Alexander Muir, eventually the Grand Old Man of the drydock business, wintered at home on the Chateauguay, and got out timber to build a church on the English River at the end of the Scotch Concession.

"In March, 1839, I arrived at Brockville and shipped on the schooner Emily for $16 a month, Capt. John Atkinson, late of the late Adelaide. We freighted flour from Whitby for two months. I then left this vessel and shipped again on the schooner Granville as mate this time, Capt. Gilmore. Here my wages were $20 a month."

This was the first promotion for the young Scotch sailor, who first saw the lakes in 1837. He was a mate, and getting $20 a month, and better things were to come.

"While on this vessel I had a narrow escape from getting my head crushed between two pieces of oak timber.

"This boat was owned by Calvin, Cook and Counter, timber merchants, at Garden Island. I remained till the end of November, when she was laid up, and I believe she never sailed any more. She was old and was not considered worth rebuilding. Before leaving for my home on the Chateauguay Mr. Cook promised me a vessel to sail the following spring."

Alexander spent this winter building barns and stables on the Irish Concession, another block of the Chateauguay, where the English, Scotch and Irish were aligned among the French. His barn building was for new settlers, and he also occupied himself making white ash butter tubs, having learned how from a Dutch cooper who, with his family, were passengers in the Adelaide when she voyaged from Toronto with the Indian presents. The Dutchman was going to Sarnia to make barrels for the fishermen, and Alexander watched him make ship's buckets from an old sugar hogshead while on board the Adelaide.

"At Garden Island I was given command of the schooner Britannia. Wages $40. She was an old vessel. She sailed fast, as she had a standing keel and great dead-rise in her floor timbers. She carried a topsail and being very stiff, when light she would work up the lake against a moderate gale of wind. We were freighting pipe staves from the head of Lake Ontario to Garden Island. Her cargo was 7,000 pipes. She drew 7 feet aft.

"I was on this boat three months, when I was put aboard a new vessel called the Harriet Calvin. She was built at Sacket's Harbor and was purchased by Calvin, Cook and Counter. She was a timber vessel and freighted timber from the lake shore to Port Dalhousie and Hamilton. I had Alexander Donaldson as mate, and he remained on the vessel for four months. We took a load of salt from Oswego to Cleveland, then loaded staves at Black River on Lake Erie, for Garden Island.

"While loading the Harriet Calvin this season at Grimsby I came near getting killed. I was standing on the stern, and the horses were heaving on the masthead purchases to hoist the timber aboard. The grips were floated out to lift the square end of the oak timber, and when the strain came the grips slipped and flew past my head, tearing out a piece of my shirt and cutting a hole in my upper lip and loosening two of my teeth. This was my second narrow escape while loading timber. The grips went twenty feet in the air after passing my head. Had they hooked in as they passed they would have taken my head off.

"In October I was given the schooner Queen Victoria to sail. She was a larger vessel, built on Garden Island two years before by a French Canadian named Louis Goler. He had no education, but he built a large number of vessels at Cape Vincent, both before and after this date. He had a large family of girls, and they all married ship-carpenters, and he had to keep them employed. So he always had a vessel building.

"Up to the year 1841, while in charge of the schooner Queen Victoria I had been in the habit of a taking a glass of liquor. In Lower Canada about New Year, and during the season of navigation when all the Garden Island vessels would arrive and we would go over to Kingston (two miles away) for supplies and to ship men. I would often take a glass of liquor with what were called friends.

"I never liked the taste of strong drink, and had given it up, but to please my friends I 'took something,' say wine, but I soon found that if a man would drink to please his friends he would have to drink more than is good for him.

"About July of this season I drank my last glass. It was Saturday night, and two of the crews had gone across the river to Kingston to get clean clothes. The vessel was not to be unloaded until Monday. I gave orders to the men that we were all to be down at the dock where the small boat was fast, and then we would all go back to the vessel together.

"Ten o'clock came. It was a fine warm moonlight night. Some of the men had returned, and they went to look for the others, and I also went up to the first hotel, close to the dock. I found the men but could not persuade them to get down to the dock, so I told them that I would go to the boat, and when they got ready they would find me there.

When I got to the dock there was a pile of sawn lumber just high enough to sit down on. The small boat was within twelve feet of me. After sitting some time I lay down and went to sleep.

"When I awoke the sun was just appearing. I sat up and began to think. I looked back to the days of my youth," (Alexander was still in his twenties) "when my mother's voice was always heard with the warning: 'Children, remember the Sabbath Day to keep it holy.'

"Liquor was seldom used in my father's house, though sometimes on the farm, when a sale was made, a glass of wine was passed around, with oatmeal-bread and cheese. I looked back on the temperance ship I had left and I thought of my four years in Canada. Then I reasoned that if I had gotten so far astray on the broad road to destruction in four years, (as to be here sitting on a lumber pile after sleeping out all night waiting for drunken companions where would I be in four or eight years more?

"I looked around and saw mates and captains losing their positions through strong drink. I then asked my God to help me, and from that hour to the hour of my death I would drink no more liquor and avoid all drinking company. I thank God daily for enabling me to keep my vow, and up to this hour, Feb 20th, 1890, I have never touched the unclean thing. I believe every soul on earth who is using strong drink is on the broad road to ruin."

Schooner Days completes the "second century" with this article. Surprising how many good stories of the old life on the lakes there are; hundreds more than have been yet told.

Waterfront Drama in One Act and two uncensored scenes.

"So do I. Er—a—. Say, Silas. That there yawl boat that you traded to me on Saturday. Her garb'rd strakes is plumb rotten."

"You don't say. Why, Gabe, I was just a-goin' to tell you that that there yawl boat that you traded to me for the one that I traded to you. Her stern's that rotten it's failin' out of 'her."

"You don't say. Er—a—, Silas, was you thinkin' of usin' somethin' for patching?"

AN OLD TIMER- The Trade Wind of Whitby, built at Portsmouth, 1853, burned in Kingston 1909. Picture per kindness of Mr. E.J. Guy of Toronto, an old Oshawa boy. The Trade Wind was a customer of Alexander Muir drydock and typical of the Schooners he mentioned in this article. 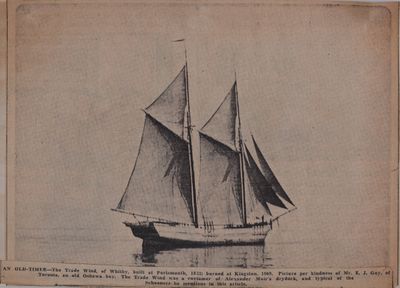