NOW for another chapter in the life of the Olivia, the little schooner-uncovered by the receding waters in Young’s Cove, Picton.

This is less lurid than her fiery debut in the Ocean Wave tragedy, described last week. Less lurid, but it sheds light on the struggles of schooner men to make ends meet. Authority for this is T. W. Rose, of Picton, whose father sailed the Olivia fifty-seven years ago. Mr. Rose himself was a sailor. - His contributions in the Picton Times as the “Doghouse Boy” are always interesting.

“That cargo of coal was the last load the little vessel ever carried. In a subsequent conversation with Captain George O’Brien, of Picton, who then commanded her, he told me it did not pay to run her, so he sailed her up into Picton harbor and run her in the mud in Ed. Young's cove. There her frames can be seen well above the low water of today.

Mr. Rose lent a sympathetic ear to Capt. O'Brien for his own father had got so sick of sailing at a loss, after spending the season of 1878 in the Olivia, that he quit the job for good, and never sailed again. Capt. Ed. Vandusen took the Olivia out in 1879, and Capt. O’Brien soon succeeded him.

Seventy-eight was a low water year in the schooner trade and in Canada’s commercial life. They hadn’t invented “depression” then to describe anything but a hole in the ground, but business generally was in the hole away down deep. Some of the old bills Mr. Rose has prove it.

The last year his father was in the Olivia she was carrying coal from Oswego to Toronto at twenty cents a ton and glad to get it. The trouble was they could not get a steady freight for her at that low figure, and she would have to lie idle for weeks, after carrying a load or two, waiting for something to offer. The Olivia was 92 feet long on deck, nineteen feet six inches beam and seven feet six inches deep in the hold. Loaded scuppers-to she could hardly carry 300 tons of coal—a $60 freight. Out of this she would have to pay a week’s wages for captain, mate, cook and three men; grocery bills for their feeding: tug bills in and out of Oswego and Toronto, and buy whatever gear she wore out. Not much left for interest and dividends, and over $2,000 had been borrowed and spent on repairs and overhauling just the preceding winter. The Olivia at this time represented a total investment of $5,000 or $6,000, and she was doing well if she made a trip a week, or thirty-five trips a season.

Wages were not high then; sailors were in luck at $1 a day through the season. Even at that low average, $35 of the Olivia’s $60 freight would go in wages. The remaining $25 had to pay all other outlays and buy food for one hundred meals.

A bill Mr. Rose has from J. H. Clapp, storekeeper in Napanee, who supplied the Olivia, shows pork at 8 cents a pound, ham at 9 cents, and butter at 15 cents; low prices, certain indications of hard times. In the States things were not much better. Thos. U. Pollay’s bill at Charlotte. N.Y., May 31st, 1878, where the Olivia bought supplies, was for potatoes at $1 a bushel—high—sugar 12 pounds for $1, also high—pork 8 cents a pound, onions two bushels for six cents, flour 25 lbs. for 88 cents, eggs 15 cents a dozen.

Tow bills varied. In Toronto the tug J. S. Clark charged $3. In Oswego the Fred Wheeler soaked the Olivia $4 each way. When she got a chance to carry grain from Napanee the tug bills were worse. She had to tow up the river from Deseronto, or Mill Point as it was then called, a distance of about seven miles. You could work the river sometimes under sail, and sometimes you could pole up, or track her by running lines on the bank, but it was a slow, hard job and if you got aground you lost more time than the tug bill would cost. Capt. Lew Collier had the steamer Flight then, and he used to charge $5 each way for towing the Olivia up or down. Capt. E. W. Johnson charged $7 with the steamer Shannon, and Capt. J. Roue, who had the tug H. B. Sherwood, charged the same as the Flight.

The only way a vessel could be made to pay was to have the luck of freights both ways, say coal in and grain out, and this was too good to be true very often. It took longer, of course, to load and unload freight at both ends, and the wages and groceries mounted, but the tow-bills were no worse.

Grain carrying was a trade which made fortunes for Prince Edward County owners of small vessels like the Olivia, but even it was in the doldrums in 1878. Mr. Rose quotes three bills.

“I have before me a shipping bill covering a load of barley carried by the schooner Olivia of Toronto —that is where she was registered under date of Sept. 18, 1878, shipped by Chapman and Son, Toronto, 7,972 bushels of barley at 1- 3/4 cents per bushel, consigned to Failing and Pratt at Oswego the total freight amounted to $99.72.

The cost of unloading was follows: elevating $19.94, three dollars per thousand for shoveling which amounted to $23.93. The load fell short at Oswego seven bushels and thirty-six pounds for which the vessel had to pay at $1.10 per bushel, another $8.52, making a total deduction of $52.39, leaving the magnificent sum of $47.33 from which to pay wages and board bill for a crew of five men and a cook also tug bills of $11.

“Here is another bill covering a cargo of barley loaded at Mill Haven, Chapman and Son shippers of 7,314 bushels barley at 1 3/4 cents per bushel, delivered in Oswego consigned to Failing and Pratt under date of Oct. 17, 1878; the total amount of freight was $128.10, the elevation was $18.30, shoveling was $21.96, leaving $87.84 to pay wages, board, tug bills, entrance and clearance papers. This load over-run five bushels and forty-six pounds but the vessel did not get pay for any extra.”

Small vessels like the Olivia, and ones very much larger, had to poke in from port to port picking up grain cargoes, so many thousand bushels here, so many there, sometimes lying at unprotected piers, from which they would be forced to run, half loaded, when the weather turned bad. Mill Haven was a tiny port on the north side of the Bay of Quinte, near Bath. The place is there yet—two houses and a mill—but it hasn't shipped anything this century. It is somewhat sheltered by Amherst Island, but in a strong southerly wind a schooner might not be able to lie there.

“Under date of Oct. 1st, 1878,” Mr. Rose continued, “is a bill covering 3,060 bushels No. 2 barley from Napanee and 3,240 bushels of No. 2 barley from Mill Haven; freight at two cents per bushel, Chapman and Son shippers; consigned to Irwin and Sloan at Oswego; elevation $15.73; shoveling $18.88; leaving $91.27 for wages, board, tug bills, wear and tear; this load fell short six bushels, but nothing was charged to the vessel but the freight on the shortage.”

The three bills quoted show the Olivia earning $226 in a month of hard work. Out of this she had to provide food and wages for five men and the woman cook, pay eight tow bills, find herself in gear, pay interest on the $2,000 expended on her the year before, and “pay for herself” whatever she cost originally.

Mr. Rose points out that this had to be done in twenty-eight seasons, for that was how long the Olivia lasted. The register shows her built at Bronte in 1853, which would give her five years more. Even so —"times was hard” in the late seventies and early eighties, as the bills abundantly prove.

But they weren't always so in schooner days. When Youell and Emery began at Port Burwell, at the height of the boom in the 70’s, they built the Lady Macdonald, naming her after the wife of Canada’s Grand Old Man. The Lady Macdonald was much larger than the Olivia. She sailed to Goderich for a cargo of salt for the Chicago packing houses and at Chicago loaded 22,000 bushels of wheat for Kingston, at 28 cents a bushel. The freight on the salt paid the expenses of the round trip, which took three weeks. The owners had the freight on the wheat, $6,160, for profit. The same firm built the two-master W. Y. Emery, which was more like the Olivia in size. One whole season Capt. Burge carried coal from Ashtabula to Toronto at $2 a ton, grossing $700 freight. The Muir Brothers built their first schooner, the Ayr, in two years, from the earnings of their drydock, and paid for her outfit the first season. She cost $15,646 altogether, and in two seasons, 1861 and 1862, she earned $17,664 net profits. Another Muir schooner, the Antelope, built in 1873, at a cost of $17,000, earned almost $7,000 in one freight from Chicago to Kingston, with 23,000 bushels of grain.

TWO OF THE OLIVIA’S CONTEMPORARIES — The NELLIE HUNTER and the C. C. GEARING, schooners of the Olivia’s time and type, from an old engraving showing Capt. Ackerman, of the Nellie Hunter, rescuing Ned Hanlan when his shell capsized in Toronto Bay in 1885. The Gearing was a particularly profitable vessel when sailed by Capt. Wm. Lobb, of Port Milford. 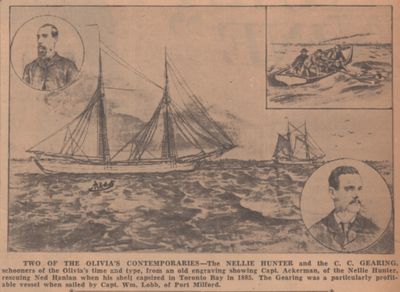