GOOD way to keep from growing old is to take an interest in Schooner Days. Mr. Hugh Neilson, first Bell Telephone manager in Toronto and founder of the Toronto Canoe Club, to whom this feature is indebted for many pictures of Toronto Bay, writes from 295 Carlton street:

"This is a very small print, but it is of one of the craft that are passing, or perhaps have passed away already. I remember the fine collection in your office. This may fill in a little gap.

Is not this kind? The print to which Mr. Neilson refers—he is an excellent amateur photographer—is the above snapshot of the stonehooker schooner Lillian, taken on Toronto Bay about 1910.

It must have been then or later, for it shows the Lillian with a straight stem, an improvement made in Port Credit that year. She was very old at that time, and had hitherto boasted a bow that was a cross between the clipper and the spoon types. She was built at Henderson, old Hungry Bay, in 1856. and her bones are somewhere in Hamilton. She became a sea-scout training ship there a dozen years ago. Mr. Neilson's picture of her is a lovely study of old Toronto harbor in a "reflective" mood, with the skipper sculling astern in the scow; as a pioneer "outboard motor."

It was George Blowers of Port Credit, owner of the Lillian, who first thought of auxiliary power for the stonehookers. He installed the first gasoline engine in the fleet, fitting the Lillian with one some time before this picture was taken. The installation was so primitive that the first attempt was not successful, for the oak of the sternpost through which the propeller shaft passed swelled up when the schooner was re-launched from Miller and Block's ways at Port Credit and seized the shaft so firmly the flywheel could not turn it over. Capt. Blowers was known as Samson in the stonehooker fleet, and he gave one mighty heave on the flywheel and wrung it off the end of the propeller shaft.

Undiscouraged by this beginning he persisted in his idea and after a season or two had a very good power plant in the Lillian's cabin. She was the last of the stonehookers to stay in commission. Poor Capt. Blowers was killed by a car on the highway, near Port Credit bridge.

The Lillian was an "American bottom," old Hungry Bay being in the state of New York. But she had been Canadian so long and rebuilt so much there was scarcely a splinter of Yankee timber in her. Long ago, fifty years ago at least, she was brought to the Bay of Quinte and engaged in the fruit trade with Rochester. She then hailed out of Picton, and like many of the Picton schooners she had a blue and white star on her stern. For a long time she was painted white above and red below and preserved the futtock shrouds which supported the topmasts of the old days.

Then she was bought by the Adamsons, who seem to have been the patron saints and fairy godfathers for most of the Lake Ontario stonehookers, and was widely known as "Black Jack's boat." She was sailed by Capt. Alfred Thomas, who for some reason wore that sobriquet. Although a small hooker the Lillian was modeled with the ends and sections of a seagoing ship, and was a good burdensome carrier. Up to this time she had a moderate clipper bow.

In the mid-nineties she was swept down the Sixteen Mile creek at Oakville in a spring freshet and damaged in the ice. Capt. Dick Smith rebuilt her, giving her a bow with so much overhang she rather resembled the old Clara Youell forward.

Next the Powell Granite Co. got her, and then Capt. James Blowers had her, and sold her to his brother George. She had been rebuilt at each end, and in the winter of 1901-2 she was further rebuilt in the old "Hospital" slip at the foot of Jarvis street as she lay in the ice. Her old ribs were allowed to remain and new ones were put in beside them from the inside and fastened down with new ceiling. She was very heavily timbered.

Later she was hauled out at Port Credit and the old plank amidships stripped off and new plank spiked to the new frames. Still later "Samson" completed the job with Abram Block, J .P.'s, assistance, by giving her a third bow, this time with a perpendicular stem, and cutting out the curvature of her old hollow quarters, giving her new deadwood aft and a clean straight run. So that even the layman can grasp there was not much of the original ship left.

But talking of pioneers, there was a schooner of that name, 99 feet long and 18 feet wide, built in Newcastle in 1860, which deserves mention.

The late Magistrate J. J O'Connor of Port Arthur knew her well, and once described her as "narrow, shoal, crank, and fast, looking like a yacht, and sailing better than most of them." She was commanded by his hero, Capt. John Allen of Whitby, with whom he sailed several seasons.

Capt. Allen kept her painted white above and green below the load-line, with green trimmings, and was very proud of her. She only registered 125 tons and could not carry 300 tons deadweight, but she was so fast she made up for lack of capacity.

On the twelfth of June, 1875, Capt. Allen was bringing the Pioneer up the lake with a load of coal for Cobourg, from Oswego or Fairhaven. They were well out in the lake, off Presqu'isle, and coming along with a fine breeze. Mrs. Paquet, the cook, put dinner on the table and rang the bell. Capt. Allen, whose watch it had been on deck, started down the companion steps to take his place at the head of the cabin table, his hungry crew following. As he did so the Pioneer heeled a little more under a puff. "Don't come to the table till you've been to the pumps, captain," called Mrs. Paquet, "that puff brought water, up on the corner of the cabin floor."

"Good God, woman," cried Capt. Allen, "come up out of that yourself then, and bring the little girl with you."

The little girl was twelve-year-old Ida Guy, of Oshawa, who was making the trip as Capt. Allen's guest.

He had the sounding rod down the pump-well before they reached the deck. There was seven feet of water in her: she was only seven feet deep in the hold amidships.

"Bring her to the wind," called Capt. Allen to the man at the wheel, "Clear the yawlboat and lower away. Into her, everybody."

The Pioneer, loggy and sailing very slowly with her great load of water, lay down wearily on her side as the yawlboat tackles creaked. Fortunately they did not foul, and they unhooked promptly. Mrs. Paquet and the little girl were tossed in, then the four sailors, and the mate, As Capt. Allen jumped off the rail the Pioneer vanished, taking their dinner with her.

She must have opened up unexpectedly and filled almost to the hatches, since the previous sounding of the pumps. As the weather was so moderate nothing was noticed until the angle of heel brought the lowest corner of the cabin floor down below the level of the rising water. Mrs. Paquet's coolness and' promptness had saved the lives of all, for if they had come down to dinner they would have been trapped in the dining room of the cabin.

The eight of them filled the little yawlboat. They were all day dinner-less in her, toiling for the shore. They made the land at Presqu'isle, and Capt. George, the lighthouse-keeper, gave them food and shelter.

Capt. Allen was a widower. Mrs. Paquet was a widow. He married her. He was drowned, along with his son and first mate, Alfred Allen, who tried to rescue him, when he was swept off the cabin top by the mainboom of the Ida Walker, ten years later. Nero, the captain's dog, tried to save the father and son, but he alone was picked up by the boat the crew lowered.

The "little girl" is Miss Ida E. Guy, a sister of Mr. E. J. Guy of this city. She told the story only this week; another proof of the proposition that a good way to keep from growing old is to take an interest in Schooner Days. 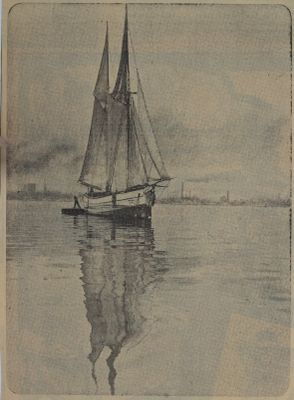