THIRTY years ago Albert Maude of Toronto, laid the Good News up in the mouth of the Humber, closing a career in lake navigation, honorable on his part and hers, and took the train for the west. He built up an express and dray business in Vancouver, and moved on to Port Moody, B.C., where he now has both anchors down. But, as he writes, “I often think of Toronto and the lakes.”

“At times,” he says, “I have clippings sent me of Schooner Days. The one about the Two Brothers’ trip to Consecon in Prince Edward County reminded me of the trip I made there forty odd years ago in the Snow Bird with Capt. ‘Old Andy’ Baird.

“Consecon, as you know, lies at the foot of Weller’s Bay, and Weller’s Bay is a young lake, almost landlocked, in the angle formed by the north shore of Lake Ontario and the great southwesterly projection of Prince Edward County.

“Weller’s Bay is difficult of entrance, and is cut off from the lake by a long sandbar and an island. It has smaller islands inside it. It is hard to get into the bay, on account of a narrow shifting channel and no piers, but after you get in there is good shelter and water enough to float a large schooner. The Carrying Place, at the head of the bay, where all traffic used to cross on a wooden railway into the Bay of Quinte, is four miles away from Consecon, down at the foot. I had been into Consecon a few times before in the schooner Helen.

“The Snow Bird, when I was in her, was a fine little schooner of two hundred tons and larger than the Helen. She was bluff in the bows and straight in the sides and pretty flat in the bottom, but she was a vessel that could sail and handle like a yacht, and she was a horse to go to windward so long as the water was not too rough.

“Yes, as you have said, she had her centreboard box on one side of the keelson. That was to give her the more strength. She was a particularly strong-built vessel. I’ve been in Muirs’ drydock at Port Dalhousie, and seen her opened up. I dare say she was the only vessel that ever really made money for old Andy Baird or his son, young Andy, both of whom sailed her. In the fine weather, when Mrs. Baird was cooking, I spent many happy days in her, in the coal and lumber trade.

“But this trip wasn’t exactly so happy. We wormed into Weller’s Bay all right and docked at Consecon and loaded barley for Oswego, five or six thousand bushels. Just think of that steamer LeMoyne you have now, that can carry six hundred thousand bushels! But, of course, she couldn’t get into Consecon.

“We cast off our lines and stood up the bay, but at dark we had not been able to get outside of Bald Head, near the passage to the lake, so we dropped back and let go the anchor.

“It was getting dark early by this time in the year, and this turned out to be a long cold night. In the morning we found we had been frozen in.

“At breakfast we were discussing whether we would be able to get out or not. I said, ‘We’ll get out, all right, but the load won’t get to Oswego this fall.’ Then we left the table, made sail, pounded the ice around the sides with poles and fenders, hove up the anchor, and got her moving.

“Before we got up to Bald Head again the ice had chewed our fenders up and was beginning to tear splinters out of the planking of the hull, so we let go the anchor and were again frozen in. And it snowed.

“We lay there for a week, and made two trips back to Consecon for supplies, landing in the yawlboat the first time and tramping down the shore, and the second time going the whole way over the ice. There was a foot of snow on the ground, and the ice was four inches thick.

“It looked as though we were there for the winter. So we stripped her of her sails and rigging, stowed everything in the cabin and forecastle, and left one man, Duncan McIntyre, to keep ship for the winter, while Capt. Baird, “Young Andy,” the mate, and myself, tramped to a train and came on home to Toronto, intending to go back for her in the spring.

“When we had been home three days we got word from the insurance people that the ice in Weller’s Bay had broken up and the Snow Bird had dragged back down the bay in the pack ice almost to the dock where she had loaded at Consecon. So we packed our bags, and boarded the train for Trenton, and drove down to Consecon. There lay the Snow Bird, all ready to leave, her sails all bent again by McIntyre with the help of the Consecon people. Ten men got into a fishboat with eight oars, and stood by us until we were up to the Bald Head passage. The wind was very light, so we lay in Weller’s Bay that night, and started for Oswego next, morning, the wind still light, the weather very cold, and a roll coming up the lake promising easterly, head winds.

“At three o’clock that afternoon we carried away the eyebolt for the main throat halliard, and down sagged the sail. By the time we had repairs made and the mainsail aloft again the light wind had hardened into a fresh east blow, and it was snowing hard. The Old Man was at the wheel, and plugged her at it, but Long Point was still a long way ahead of us, and beyond that we would have no shelter for the heavy thrash to Oswego. So he let her go up the lake, and never stopped till we were under the lee of Toronto Island next day.

“When we came to anchor under Gibraltar Point we were so badly iced up, in the hull, sails and gear, that it was very hard getting the canvas off her, and when the tug Frank Jackman came out for us they had to give us their steam hose before we could get the windlass free enough of ice for us to heave it round and weigh the anchor.

“The Jackman towed us in through the old Queen’s Wharf channel and left us at the old Northern Docks, about where the Loblaw plant is now, in Toronto’s industrial area. The place was then covered with lumber piles. Next day the snowstorm let up, and it froze hard. The Snow Bird was frozen in solid at the dock. In those days, when Toronto Bay froze it froze. The ice would cut 36 inches thick.

“We ate our Christmas dinners in Toronto, and that is where the barley spent the winter, not Oswego. Next spring the Snow Bird fitted out and finished the voyage, five months after she began it. Her crew had to measure the length of Lake Ontario four times to get her across to Oswego —twice in the Snow Bird and twice in the train.

“There wasn’t much for Capt. Baird in that charter. I don’t remember the figures, but 6 cents a bushel was big money carrying barley then, and at that rate the whole freight would be about $300, paid in April for a job begun in November, with two tow bills and wages for four to come out of it.”

The Snow Bird was always an intriguing item of Toronto’s waterfront. At the time Mr. Maude speaks of she was appropriately painted grey and white, later green and blue, still later black and red. No one, not even the port registrars, knew when or where she began. “Original building unknown” is the entry in the Register of British Shipping. The story went that she had been an American bottom, originally the brigantine Mayflower of Genesee, not the one the Pilgrim Fathers came out in, but nearly as old. Perhaps on this account she was nicknamed the Flying Yankee. Perhaps, also, she was the Mayflower mentioned in The Yellow Briar. Some said that the Flying Yankee was her first registered name, but the first registered name I have been able to find for her is the Minnie Proctor.

She had been rebuilt in Presquisle Bay, as far back as 1863, perhaps by the late Captain Wm. Quick for John E. Proctor, J.P., one of the magnates of Brighton, of whom a curious legend exists. It was he who re-named her. As the Minnie Proctor she was driven ashore at Oakville, and there salvaged and bought by Thompson Smith, M.P., who re-named her the Snow Bird. This was in 1875. Her official dimensions were 77 feet length, 18 feet beam, 6 feet 7 inches depth of hold, registered tonnage, 82.

The Snow Bird she remained for the rest of her long life. It only ended in 1904 when she was frozen in near the yacht club, on the south side of Toronto Bay, filled up with ice during the winter and sank about this time in the next spring.

Last action picture of the Snow Bird in the writer’s mind dates from the summer of 1904, when Major Douglas Hallam and I were working up for the Eastern Gap from Frenchman’s Bay in the little Frou Frou, against a strong nor’-wester. Abreast of the Jetty, at the cut leading into Ashbridge’s Bay, we came upon the Snow Bird at anchor close in under the lee of the beach, crying her eyes out. Her pumps were going furiously and she had straightened out so much in her extreme age that the water was gushing in two piteous streams from the hawsepipes in her bows, as well as from her scuppers. But her cheery crew—there were only two of them, this time—just waved to us when we asked if they needed help, and hailed back that they had her “almost dry.” 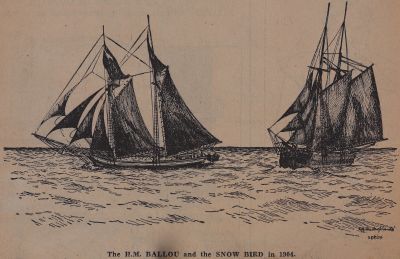