THE New Dominion of Dresden was lying there in the Sydenham River, in need of a new mainmast. Her old stick had gone soft at the top, around the trestle-trees. It had to come out of her. It was a big spar, too, 22 inches in diameter and 83 feet long. A new one just as lofty, had been cut for her. This was the one "with the head whittled to a spike," which was mentioned recently in Schooner Days as combining with the unusual hailing port in distinguishing this vessel when Capt. George Irving brought her to Toronto 35 years ago. The time of this story is 10 or 15 years earlier than this event.

The nearest sheerlegs or derrick necessary for handling such a big stick was in Port Huron, and to reach there meant towing the schooner 40 or 50 miles down the Sydenham and up the St. Clair rivers.

What would you do?

This is what Capt. Geo. H. Morden, who owned the New Dominion and a flock of other vessels, steam, tow, and sail, did:

First the old mainmast was well blocked and cleated where it needed it, and the deck below and around it was well shored, to take the weight of two spars, which would be three or four tons. Then a tackle was rigged below the soft spot at the trestletrees and the new mast was hoisted aboard, upended, and allowed to rest with its heel on the deck, beside the old mast. It was firmly lashed to the old spar, and guyed in four directions. Two guys led forward, port and starboard, and two aft.

Next the old spar was sawn through, at the deck, and below the deck. It was held by its rigging and the lashings to the new spar. The sawn-through sections were then removed from below. Both spars were pinched along until the new one was immediately above the hole through the deck which the old one had occupied. With the lashings eased, the new mast was lowered down through the opening until its heel occupied the mortice of the mast-step. The lashings were reset, and the tackle was shifted to the new mast. The guys being freshly set up on the new mast, the old one, with its rigging, was lowered to the deck. Its shrouds and stays were lifted off and fitted over the head of the new mast, and ere night fell the New Dominion was again ready to set her mainsail.

This neat bit of seamanship was recounted to The Telegram this week by a man who took an active part in it, Mr. W. H. Morden, of Oakville.

"You made me laugh when you were speaking last week about the head of the New Dominion's mainmast being whittled to a spike," said he, "for that was the very spar, and I helped whittle it and step it at Dresden. That very day the big flood carried away the bridge back home in Oakville. We didn't need topmasts when we had the New Dominion, for she towed behind the United Lumberman, and you couldn't get tow barge sailors at $20 a month to go aloft to set and stow gafftopsails if you had them."

Incidentally, Mr. Morden cleared up the mystery of the origin of this one of the four New Dominions, which we were discussing in Schooner Days when the whittled spike was mentioned.

She was not, as supposed, the New Dominion of Picton, so this leaves that schooner to be accounted for. This New Dominion, later of Dresden, hailed originally from Port Rowan, and was the one built there in 1868. Captain Geo. H. Morden bought her about 1885 and sold her in 1900 to Capt. George Irving.

Capt. Morden, one of that grand old navy out of Oakville, sailed among other vessels the schooner West Wind and the Kenosha. Capt. Steve Wagner lost the latter at Rondeau, on Lake Erie. Capt. Morden became commodore of the Isaac May fleet, with three barges to tow, the Severn, Waubashene and Muskoka. He launched into the lumber trade for himself with the steamer Enterprise, which was held together with a truss or hog-post. He was in partnership with the late Squire Terrice, of Dresden, Kent County magnate, and they also had three barges to tow, Squire Terrice failed, and Capt. Morden took over. He sold the Enterprise, and she was later lost in Lake Huron with her crew of eight men.

Dresden, twelve miles up the Sydenham River, was then in the heart of the woods and a good spot for shipbuilding. Here were built the tow-barges Byron Terrice and Dolly Morden, the latter in 1883 and named after Capt. Morden's daughter. Here, too, in 1885, Capt. Morden built the steam barge United Lumberman, carefully designed for carrying lumber and towing lumber-laden barges. She was such a splendid success that associates wanted to put her into the Chicago passenger trade. And she is going strong yet, on salt water, whither she was sold when the Great War made big demands on tonnage. It must have puzzled port authorities to see a wooden steam barge coming in with "UNITED LUMBERMAN of DRESDEN" on her stern, when Dresden in Germany was tied up tight by the iron blockade of the British navy. Few even in Ontario would recognize our little western town as a "seaport," but from its position on the navigable Sydenham River, and its prolific shipyard, it was entitled to share with Wallaceburg the honor of being a port of registry.

"We did a great trade in lumber with Chatham at this time, and we needed light-draught barges to get in over the bar," said Mr. Morden, "so we bought the schooner New Dominion of Port Rowan and the Schooner Dauntless, of Oakville. The Dauntless was a smart sailer, while she could carry her sail, but she was fine as a yacht, and terribly crank and lay down to it so that you couldn't carry on hard enough to drive her in a breeze. She was a little white schooner with a straight stern and sharp lines. One spring flood caught her and carried her up on the banks of the Sixteen in Oakville and left her there. She drew five feet. When the waters subsided ways had to be built and she was launched again, like a new vessel. Capt. George Moulton sailed her for a time. She was a poor thing as a lumber barge for they have to keep an even keel under their loads. The Dauntless ended as a light-ship or semaphore vessel in the Detroit River.

"The New Dominion of Port Rowan was a fine vessel for the trade. She carried a big load and was very strong. She had a rock-elm bottom, built from rock-elm timbers salvaged from the Inner Bay, near Port Royal. She carried a lot of lumber for us."

At this point another friend of Schooner Days, Mr. J. W. Redner, from down Belleville way, takes up the parable:

"George Irving brought her down as you say, but he only had her that season and sold her to Montgomery & Allan, Belleville.

"Captain William Montgomery changed her over; he and his mate, Mick Meehan.

"They took the masts out and cut 12 feet off them, and cut the rigging accordingly, and sent up topmasts and rigged out a jib-boom.

"He also put new decks in her, which altogether made her look like a schooner from the covering board up, but from there down she was a homely-looking barge and handled as bad as she looked.

"I was in her when she was refitted and was mate in her afterwards, and always had a great admiration for Captain Montgomery, who was originally a salt water man and knew all the tricks of rigging and wire splicing.

"He sailed her for a number of years after that, and on account of ill-health sold his interest to Westley Farrington, who sailed her the rest of her time.

"The New Dominion was towing with the United Lumberman when George Irving bought her, and it was conceded by most that knew her that she would have sailed as well and handled as well if she had been left in her barge rig."

In her barge rig, which consisted of "four lowers," the New Dominion was no slouch, from this example given by Mr. Morden. Once when Capt. Jack Wagner was sailing her, in the lumber trade, she got ashore near Southampton, loaded with shingles. It looked quite hopeless and the crew packed their bags and took to the boat to transfer to the hovering steambarge. They left the sails hanging as they had been set. The New Dominion rolled and wallowed in the surf until she had got rid of her deckload of shingles, with the breakers' assistance, and then, under canvas and self-steered, she wriggled off the bar and worked out to windward into deep water—to the amazement of Capt. Wagner, who had a hard time catching her. Nor did her rock elm bottom take much harm from the pounding.

The most maligned vessels always have some good point. Mr. Morden's criticism of the Dauntless, for instance, was from the standard of ability to carry a big load without rolling or tipping, and there she apparently fell down literally as well as metaphorically.

But she was a clinker to sail. The late Capt. Dave Reynolds, of Oakville, mate of the schooner Baltic, skipper of the Coral and Parthenon, and master of the R.C.Y.C. steamers Esperanza I., Hiawatha and Kwasind in succession, told me of being one of six men in the forecastle of the Dauntless one November in the 1870's. They ate their breakfast in Kingston harbor, made sail, and had their mooring lines out in Toronto harbor when the cook rang the bell for supper.

In the lake schooners, breakfast was usually at 7.30 a.m., dinner at 12 noon and supper at 6. Giving the Dauntless the benefit of an early start—say the crew turned out at 5 a.m., had breakfast, and hove up, and got her going at 6, which would be earliest daylight for the time of the year, and even supposing the cook put the clock back an hour, and they had supper at 7, that would only give thirteen hours of running time for the 160 nautical miles between Toronto and Kingston. This checks with Dave's repeated assertion that the Dauntless logged 13 knots all the way.

ONE OF THE FINAL FOUR-POSTERS THE PORT JACKSON, splendid Australian clipper, training ship for many certificated officers. 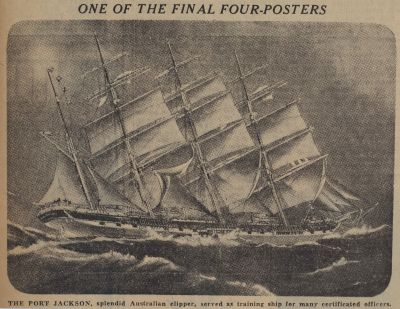