STILL working to windward with the Cat Hollow fleet—there was the Mary Adelaide, of Consecon, loaded with 37,000 feet of lumber there for Wellington in 1856; and the scow Sam Bennet, of Brighton, which loaded Cat Hollow lumber for the same place in 1861.

The Billow, of Brighton, was another fugitive caller at the wharf of Colborne, as the Cat Hollow or Lakeport pier is sometimes called in the harbor entries, “Fugitive” because, as Mr. W. W. D. McGlennon confirmed in his letter to Schooner Days last week, “Lakeport was no place to lay.” Vessels had to get away if they needed shelter.

Occasional steamers seem to have called; in fact, the old Richelieu and Ontario line side-wheelers, like the Caspian, Passport and Magnet, had a schedule which at times included Cat Hollow—under its official name of Lakeport—up to 1898, and possibly later.

One of the earliest steamer calls recorded is the Maple Leaf, of Kingston, 400 tons, which reported at Wellington “in ballast from Colborne” (which would be Lakeport) in 1856.

There was intense rivalry between the Magnet and the Maple Leaf, culminating in a lawsuit in 1852, when both these steamers were still almost new. Judgment was given for the Magnet on Oct. 23 of that year; and that very day Capt. Neil Wilkinson, of the Maple Leaf, died here in Toronto. But for this, of course, neither the court nor Cat Hollow could be blamed.

HIGHLAND SCOTS from the Hebrides who reached Cat Hollow in the early fifties added to the fleet. Donald Connagher built the narrow 72-ton schooner Thistle, 82 feet long, 17-foot beam, and 7 feet depth of hold, in 1862. Capt. John Shaw “from the lone shieling on the misty island” commemorated the bens of Jura by building a schooner of that name in the same year. She was 88 feet long, 20 feet 3 inches beam and 7 feet 6 inches in the hold, and registered 96 tons. These vessels were somewhat similar in size to the Richmond, sailed by Capt. John Shaw’s son Malcolm—his first vessel. David Tait of Milford built the Richmond on Amherst Island in 1857. She was not built at Cat Hollow, but may have been rebuilt there.

After Capt. Shaw sold the Jura, she got ashore on the Duckling Bar, off South Bay Point, in a snowstorm. Her captain was sick and the crew were bringing her home. They abandoned the wreck and all reached Milford in safety. Some days later, Capt. Wm. Lobb, of Milford, homeward bound from Oswego with a southerly gale behind him, saw the Jura sailing all by herself, under bare poles, up the Upper Gap.

She had worked herself off the bar and through the Timber Island passage. She was a good little vessel of 6,000 bushels carrying capacity or more, and rated A-2 for insurance—altogether a great temptation as a salvage job. But it was blowing too hard to lower a boat or get a line on her, and Capt. Lobb and his crew, to their great regret, saw the Jura whirl along in erratic circles before the wind, until she drove in on the Gibraltar-like face of Cape Versey, known to sailors and fishermen of Prince Edward County as “The Rock.” Here she beat to pieces. Her maintopmast long served as flagpole for a residence on the top of the cape. It may be there yet, though the wreck occurred fifty years ago.

This vessel was the Jura referred to by Mr. McGlennon last week in his story about the young farmer who went to sea in her and had to be told “Gee!” or “Haw!” to get him to put the helm to port or starboard. So many sailors called her the “Jury” that some of the old records contain her name in that form.

Other Cat Hollow craft were the Octavia, about the size of the Jura, built in the place in 1866 for Major Joseph Keeler, M.P. for East Northumberland, and called after one of his daughters; and the Sibylla, built or rebuilt; there in 1871, a larger, deeper schooner. She was 97 feet 7 inches on deck, 22 feet 7 inches beam, 9 feet 1 inch deep in the hold and registered 147 tons. She was rebuilt in Cat Hollow by John Tait from the Two Brothers, built at Sorel in 1856 and bought by Major Keeler some years later.

Major Joseph Keeler, third of the name, was the grandson of the original United Empire Loyalist grantee and gander who first came to Colborne from Portland, Vermont, in 1789, and later settled here, bringing in forty families. His son, Joseph, Major Keeler’s father, founded the town of Colborne.

There was also the little schooner Parthenon, built by Capt. Jas. Andrew in Oakville. She was in the cedar post trade with Charlotte out of Cat Hollow, before she was rebuilt at Wellington, “till nothing was left of her but the centerboard and jibboom” as friend Amos Macdonald of Woodrous puts it. His father, Robert Macdonald, who had a wharf and storehouse in Little Sandy Bay, performed this major operation, and renamed the transformed Parthenon Robert Macdonald, after himself. She later became a steamer, and still later - about 1910 - came to a fiery end.

The Parthenon was only a small schooner of 100 tons, capable of carrying 3,000 to 4,000 bushels of barley, but this will give an idea of the earning capacity of such vessels somethings. After she was rebuilt and renamed the Robert Macdonald, when Capt. Matthews was sailing her, there came the great rush to get grain into the United States before the McKinley tariff of 30 cents a bushel made its importation impossible. Every vessel was crowded her limit of speed and burden. Capt. Matthews, or his owners, chartered the tug Charley Ferris of Oswego and had her tow the Robert Macdonald across the lake for two round trips between Oswego and Prince Edward County ports, empty one way and barley laden the other, in order to lose no time through calms or headwinds. The consignees were so anxious to get the barley in for Oswego breweries before the tariff clamped down that they paid a freight which made such tow-bills possible. The Robert Macdonald earned $1,000 that last week in October.

But the pride of Cat Hollow was the Keewatin, rebuilt there in 1889 by John Tait, Prince Edward County builder, from the hull of the two-masted schooner Paragon, one of Lummaree’s [Lamoree] earlier products built at Oshawa, in 1853. The Paragon, by the way, was so named by the late J. O. Guy, secretary of the Harbor Board at Oshawa, and for a long time harbormaster and vessel owner at that port.

The Keewatin was larger and longer than her original and had three masts. Her name meant the north wind, and a fine picture of life-sized Indians making medicine to bring forth that desirable breeze decorated her stern. It also showed a boar’s head and interlaced branches, insignia of the house of Campbell, Esqr., with wharf and weighscales and warehouse and elevator and family residence in Cat Hollow, was her owner.

In the presence of the great crowd there assembled she stuck on the ways when she was being launched after rebuilding, and she was never a lucky vessel. Her owner, who had lost the unfortunate Blanche before rebuilding the Paragon, was found drowned on the lake shore. Although the largest Cat Hollow claimed, she was too small to be profitable in the diminished grain trade after the McKinley Bill knocked the barley export in 1891, and her freights on coal cargoes left her “in the hole,” for she could only carry 500 tons and required as large a crew as the three-masters with loaded 700 or better. Capt. James Redfearn made the most of her for a long time, and the Elias Rogers Co. here in Toronto employed her for years. Like the Trade Wind whose keel Lummaree had also laid, the Keewatin had a long life, for it took a Mexican Gulf hurricane to kill her in 1917. She was sold during the Great War, and went south, never to return.

THE KEEWATIN, pride of Cat Hollow, on her launching day, July 23rd, 1888. It will be noted that although rebuilt and owned in this port, “of PORT HOPE” was emblazoned on her stern, because that is where she was registered. The old elevator and warehouse may be seen above the heads of the crowd on the wharf—who are, as usual, more interested in the camera than the event. Beyond the vessel may be seen the outlines of the famous Grimes Hotel, of which more next week.

THE JURA, from a crayon portrait by C. I Gibbons, the tugboat-fireman-artist, preserved by Peter B. Shaw, Mountjoy avenue, Toronto. 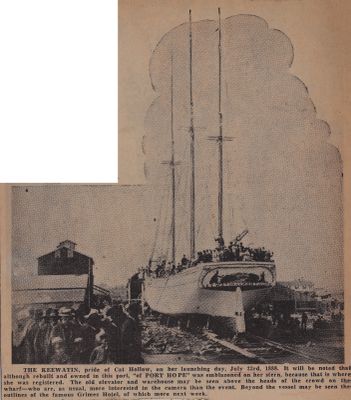