FAR from her native lake, in a muddy estuary near Chatham, New Brunswick, the Erie Belle of Port Burwell prepared to sail home with the painfully acquired load of pulpwood which was to pay for her daring old-age venture to salt water.

'You'll be taking two pilots for the Mirimichi," the harbormaster told Capt. Donald Manson of Port Hope, affectionately known as Roaring Daniel in the lake marine, "and their fee is $2.50 a foot for a loaded vessel."

"But I don't need a pilot. Didn't I bring the Erie Belle all the way | down here from Toronto and into this crick by myself?" objected Daniel.

"Well, you can't take her out without pilots. That's the law," he was told. As he couldn't get a clearance otherwise he was forced to find $60 somewhere for two complacent natives who lived on board at his expense until the laden Erie Belle, pushing acres of the Lower Gulf ahead of her, turned the corner of the Gaspe Peninsula.

How the poor man raised the money he alone knew. By this time he had spent all his ready cash and the bank and the other owners of the Erie Belle had probably accepted his last draft.

Off Gaspe in the Gulf, when he got rid of his two paid guests, a third jauntily came aboard. He was the Quebec pilot, he announced. Had to have a pilot to Quebec. Capt. Manson meekly groaned and carried him on up the river. And paid him somehow.

From Quebec the Erie Belle managed to get to Montreal, principally with the help of "jerks" from obliging steamers. At Montreal the problem of climbing the rapids had to be met. It would be canals all the way to Prescott. The most water they could promise him in the Lachine was 9 feet. So the whole deckload had to be piled on board an empty barge, after a dicker had been made with an exacting bargee, and the schooner approached the ascent with a quarter of her load trailing behind her. Even lightened up to 9 feet they had to heave her in over the lock-sills, and when they came to the Galops canal they had to unload some more pulpwood into a second barge, at ruinous rates. Even so lightened the boys broke the capstan bars dragging her through the lock gate. After weeks of this toil they got as far as Prescott, where the St. Lawrence River again becomes navigable naturally and here the pulpwood was unloaded from the barges and again piled on deck.

Nothing but a good breeze astern would take the Erie Belle up the river against the current through the Thousand Islands to Lake Ontario, and until it came she had to wait, with wages running on and grocery bills climbing and climbing. A good Samaritan disguised as an upbound steam barge offered a tow before the bailiff came aboard; the wind came fair at last, and somewhere in the fourth month after starting, the Erie Belle got back to Ontario, completing two thousand miles of sailing, and nosed into No. 1 lock at Port Dalhousie and the then Welland Canal.

Here, lock by lock, she had to climb the 26 steps over Niagara Falls, between Lake Ontario and Lake Erie, where she was born. After she cleared from Port Colborne a westerly wind wafted her down to Buffalo and she turned northwards again into the Niagara River. The current did the rest for her, and at long last, with the new cut pulpwood bleached to a dirty grey with months of sun and spray and steamboat smoke, she threw out her mooring lines on the Schlosser Dock of the pulpmills on the American side.

Capt. Manson sped homewards to Port Hope to raise further cash or credit to pay off the crew — and the butcher — and the baker — and the chandler — and the tugman — and the lighterman — and the canal-helper — and the bridgeman — and the lockmaster — and the Lord-knows-who-not. Bills had piled up on the Erie Belle higher than her deckload of pulp. The captain's train had not left the station before the army of marine marshals, marshal's deputies, sheriffs, deputy sheriffs, creditors, bill collectors, lawyers' clerks and just plain chiselers swarmed aboard the Erie Belle like gulls around a fishboat at gutting time. One chap with a tin star on his chest and two revolvers making an awkward Grecian bend of his after overhang nailed an official document on the great bole of the foremost and announced that he had seized the vessel on a "libel." He installed himself in Roaring Daniel's den — which was the modest stateroom in the Erie Belle's battered cabin, where the captain had his bed and desk and a lumpy sofa.

"You'd better not be in that stateroom when the Old Man gets back. He's plumb rough and cantankerous about anybody usin' his bunk," advised Mallet Mack, one of the four argonauts who occupied the forecastle. He wore a broken nose with an air of grandeur, proud souvenir of an epic waterfront fight thirty years before.

"H-m-m. He is, eh?" the revolver garnished marshal replied in what' he believed to be the orthodox drawl of a Texas terror. "I'm kind of that way myself. An' besides —" nonchalantly patting his hog-leg garnishments, 'Colonel Colt made all men ekal."

"Roarin' Dan ain't heard about it yet, and I'm still givin' you the same advice that I started out with about bein' elsewheres than in his stateroom when he gets here," quoth the knight of the nose and mallet. But the interloper paid no heed and presented himself at the head of the table on the first tap of the cook's bell for dinner.

Mate, cook and crew were all loyal to Capt. Manson and his battered "barque," and they decided to stay with her, wages or no wages, while the unpaid groceries held out. Their skipper was back in two days, by which time the pulpwood had been unloaded. He came aboard just as the cook was ringing the bell for supper.

Dockwallopers had prepared him for the bad news. The first thing he saw, as his head topped the rail when he climbed the dock ladder, was the yellow paper on the foremast. The next was the tin-starred two-gun gentleman steering a course for the cabin table.

"Who in hallalujahland are you?" demanded the master, swinging his leg over the rail. His uninvited guest opened his coat and displayed his manly form, his argent badge and the butts of two revolvers.

"Overside!" said Daniel. "Boys, rip that plaster off the foremast and send the pieces after him!"

The four gathered around the paulpost, with hair slicked down and ears pinned back for supper, lost no time in carrying out the order, but before the yellow shreds blew to leeward they saw the sheriff sailing through the air like the coil of a heaving line. Propelled by Daniel's fists and boots he hit the dock with a royal salute of two guns, for the revolvers went off as he landed, He vanished in a cloud of smoke, with the seat of his pants on fire.

"Single up your lines and cast off," said Daniel next. Immediately, current borne, the Erie Belle edged out into the river.

He was not going to plunge her over Niagara Falls, like a dying Viking making a funeral pyre of his ship. Not at all. The north wind sweeping up the river gave her a boost against the current, and, with a little canvas on her, she sidled across the stream towards the Canadian shore. She "made the land" at French Creek, near the mouth of the Chippewa. Here he ran her in—safe on Canadian "soil" against American writs of attachments, for the time being, at any rate.

Over the postponed supper Daniel settled with his crew. He did right by them, as he always did. Wages were a first charge against freight and vessel. Whatever else went unpaid, they had to be met. After that he and the owners would do what they could to satisfy all the other bills. Meantime—the Erie Belle had sailed her last.

The gang were satisfied. They stayed with her and stripped her, even if they had been paid off, and they made sure that it was going to be her last voyage by neatly dumping all the gear, just as they unrove it, down the forward hatch. Even Slabline Charlie in his highest flights of inspiration would be unable to fit her out again for anybody, with all the square-rigger outfit tossed piece by piece in the same heap with fore-and-aft sheets and halliards and clewlines and downhauls, and the sails on top of all, and not a tag to identify anything.

This done they departed and nature did the rest. The Erie Belle lay for the remainder of the season under a blanket of writs and mortgages that covered her as completely as the newly fallen snow. The following spring the freshets caved in her starboard bow with the ice- cakes of the Chippewa Creek, and she filled and settled on the bottom.

There she lay until the great operations of the hydro power development and the new Welland Canal ten years later turned the Chippewa end for end. She had a narrow escape from being buried, with steam shovels for pallbearers, but the Russell Construction Co. saw possibilities in her, and bought her hulk for the proverbial song, from whomsoever held the forgotten title to her. They wanted her for a floating tool shed, and a good floating tool shed what remained of her made. They cut her down to her light water mark — that is, where she normally floated when not loaded — and they patched up her forward end with a bulkhead, and took out her rudder and made her stern the bow of the "new" craft.

It took a lot of faith and imagination to recognize in this red-leaded shell of a ship's bottom, turned end for end, the vestal-white Erie Belle, which used to race the Yankee Blade from Chicago to Collingwood in the great days of the grain trade, spreading fifteen mighty wings of "standing canvas" beside her fly-by-nights and light sails. But that was how I last saw her in Frenchman's Bay in August, 1917. Three or four years afterwards she waterlogged and sank off the Eastern Gap, Toronto, while being towed down the lake to some construction job where her last owners had the contract.

THE AUGUSTA, one of the Erie Belle's sisters on the lakes. 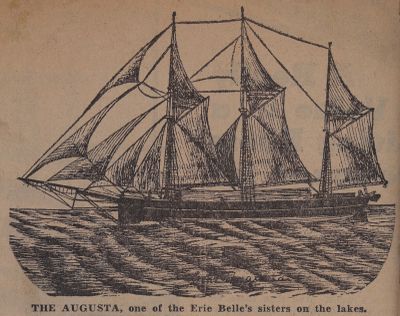