"I'VE never been in a sailing vessel as one of the crew," writes Capt. W. J. Stitt, of 320 Kennedy ave., Toronto, master mariner, "but I've towed many of them out and in Great Lakes ports during my many years as a tug captain, and also handled quite a number in and out down on the Atlantic coast when I was towing down there.

"When I was towing pulpwood barges between Gulf of St. Lawrence ports and the Great Lakes, I used to run across many of the schooners becalmed off Oswego, Fair Haven, Sodus Bay and Charlotte and give them a pull into port, gratis, of course, and in this way, and by visiting them while in port, I got well acquainted with many of the captains and crews. I must say right here, they were a fine lot of men and expert navigators.

"We in steam know little of the hardships endured by these hardy men of the sailing vessels. Blown all over the lake by gales in blinding snowstorms and freezing weather, it was some nice piece of navigating to bring their vessel into port safely. In the old days when there were hundreds of these sailing vessels sailing the lakes, all the lighthouses were lit by oil, which could not be seen any distance, and they were few at that. The keeper had a hand-horn to guide the vessel into port, but in gales of wind they were useless. Is it any wonder that wrecks were plenty under these circumstances?

"I knew a vessel that once blew around Lake Ontario for a week and was given up for lost, and one morning came sailing into Kingston. This was the Walter A. Sherman, commanded by Capt. M. Hourigan, of Oswego. She was then a tow barge belonging to the Geo. Hall Co., of Ogdensburg. I think she had been a sailing vessel before the Hall Co. got her, and she was being towed down from Charlotte by one of their steamers. A severe gale sprung up and the tow line parted, and it was snowing heavily, so the steamer ran into Cape Vincent. All the tow barges carried some canvas in those days in case of getting caught in just such a chance as this, and also to help the tow along with fair winds. The Walter A. Sherman had two short masts and three sails, staysail, foresail and mizzen, and this bit of canvas enabled Capt. Hourigan to bring her into port a week after she was supposed to have gone to the bottom.

"The schooner and tow barge days are, of course, a thing of the past and powered vessels have taken their place.

"In looking over some old-time photos to-day, I came across one of the schooner Cora A, that I used to tow in and out of Fort William when I was in the tug James Whalen in 1911. This schooner used to come in loaded with staves and box-wood from Lake Michigan ports.

"She was a fleet-footed vessel, as you can see from the photo. After dropping her outside the Mission River in a strong northwest breeze one morning, we ran along with her to see just how fast she was. The Whalen was good for 14 miles per hour, and, believe it or not, we had a hot time getting by her. In your 'Schooner Days,' I don't remember reading anything about the Cora A. What do you know about her history?

"Also about the history of the Walter A. Sherman? I think this vessel was once a lake schooner under another name before the Geo. Hall Co. made it a tow barge. Am I right? You made mention of the Jennie Matthews and C. A. Beals in an article a short time ago. These two vessels belonged to the Geo. Hall Co. also. All their tow vessels have gone by the tooth of time.

"I am enclosing photos of the Cora A, Walter A. Sherman and Our Son. The latter went down on Lake Michigan in 1931, the last of the Upper Lake schooners, I believe. Capt. C. A. Mohr, of the William Nelson, who took the crew off the Our Son, took the snap just before she disappeared beneath the waves and sent it to me. If you can make use of these photos, you are welcome to use them.

"You will pardon the length of f this letter and can use your own judgment about using part or all of it for publication. I have been a constant reader of The Evening Telegram ever since I came to Toronto twenty-two years ago, and have followed your most interesting chapters of Schooner Days, and have missed but few of the articles. If I am away, I have them kept for me."

Thanks, captain. No apologies needed for such a letter as yours. I don't think the Walter A. Sherman was ever a schooner or sailing vessel. You could usually tell the I schooner that had been cut down to a barge by the old channels and chainplates for the many "legs" of her shrouds which remained after the standing rigging had been taken out of her. None of these are apparent in the Sherman's photograph. The Great Lakes Register of 1914 describes her as a tow barge; built by Robert Mills at Buffalo, N.Y., in 1882, 163 feet long, 33 feet beam, 12 feet depth of hold, and 519 tons gross register. She had a centreboard. This again is an indication of her having been a sailing vessel, but many tow barges had boards to make them steer better and handle after a fashion under sail.

Our Son had been reduced to tow-barge status in the register of 1914, but she had been a splendid topsail schooner in her time, rigged like the Cora A, but with more square yards. In her last days she crept around under a sort of barge rig, just enough to get her from port to port without a tug. She was larger than the Cora A — 182 feet long, 34 feet 6 inches beam, and 16 feet 7 inches deep in the hold, and registered 720 tons. She was built at Black River, O., in 1875, and was named in memory of a son of Capt. Frank Kelly, her owner, who was drowned while she was building. -

THE CORA A. with a good breeze off the Mission River

CAME INTO PORT A WEEK AFTER BEING "LOST"—The Walter A. Sherman of Ogdensburg.

END OF OUR SON, snapped from the rail of the William Nelson, which rescued the crew of this last of the dark wings 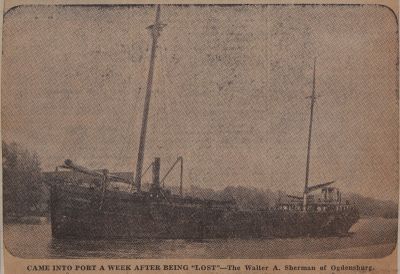 Loss of OUR SON
Groups of Related Records