YOUNG, ambitious, and keen as mustard, John Tait came to his father in their Amherst Island home when he was eighteen and told him he had just signed a contract to build a small scow schooner for some Prince Edward County parties during the coming winter.

"I'm sorry, my boy," said the father, "for we can't make anything on that contract; the price you have given means we will build at a loss."

"You'd no business to sign without first consulting us," said brother David, "the price is too low. Tear the contract up. It's none of our making."

"No," said John, "it's nobody's making but mine. It's my contract, and I'm going to take the risk and do the work. If there's any loss it will come out of my sweat."

His elders were aghast at the way this fledgling was taking leave of the family nest. John went to work next day with a gang he had already hired, rushed the vessel through to completion, launched her, and collected a smart profit from the amazed owners, who gladly

who gladly paid on the nail. The name of this vessel has been lost. It may have been the Plough Boy or the Bay Ranger.

At any rate, she was the first of a long fleet aggregating probably a hundred vessels, of 20,000 tons carrying capacity, which owed its being to John Tait's genius.

In addition to the schooners already mentioned, which he built at Roblin's Mills and elsewhere, John Tait built the J. N. Carter, Flora Emma, J. W. Langmuir and Olive Branch at Picton, and there rebuilt the Flora Carveth and the Robert Macdonald, and the John Walters from the hull of the Susan Bond. In Picton he also built the steam yacht Madge, the steam barges Aberdeen, Saxon and Water Lily, and the barge Rob Roy, and lengthened the steam barge Niagara.

On the beach over at Wellington he built the schooners Dominion and H. N. Todman for Horatio Nelson of that name. At Black River bridge, near Milford, he built the Morning Star, 5,000 bushels, for Pat McMahon. She was sailed by Captain John Brown, and piled up in a blow just east of Oswego harbor. At the same place he built, or assisted his father in building, the schooners Hibernia and Gold Hunter. At Case's Wharf, Point Traverse, he built the schooners Plough Boy, Prince Edward and L. T. Vorce.

At Cooper's Wharf he built the S. & J. Collier, named after two of the Collier brothers, and the other schooners described last week. Here also he rebuilt the Sea Bird, and the Marysburg from the hull of the James Leslie, and the Ontario off Whitby for the Collier brothers and Capt. J. D. Vanalstine. There was another Ontario built at West Point, near Wellington, and either a third, or one of these two, was registered as built at Hallowell in 1867. Tait may have built or rebuilt all these. Over in Lakeport, on the mainland he rebuilt the schooner Two Brothers into the Sybilla, and the Paragon into the Keewatin, and built the Octavia, a schooner whose remarkable staunchness was proven by her twice bursting through a wharf without a particle of damage to herself, as related elsewhere in Schooner Days.

Much of Tait's building was done in Prince Edward County, but, as said, he was greatly in demand and moved about. Another of his "outside" contracts was the Great Eastern, not the original white elephant steamship of that name, but the large ferry between Prescott and Ogdensburg, N.Y.

John Tait was famous for his untiring energy and his quick eye for the crux of a problem. He could keep three building jobs going at once and be happy in them all. He would be in one yard at day light—say Cooper's Wharf in South Bay—check the carpenters as they arrived, lay out the next piece of work for the foreman, and climb into his cutter and drive across the county to Picton and true up the keel blocks for another ten-thousand bushel schooner there before opening his dinner pail. Then he would drive up the ice of the Bay of Quinte to Roblin's Cove, size up the problem which had the carpenters blocked with one puckering of his keen eyes, and expound it for them with three or four swift strokes of the , red chalk or carpenter's pencil on the face of a fresh flitch of white oak.

He was a great man for rigging gear for moving heavy timbers, or striking bevels, for scarphs and mouldings. In his mind's eye every ship was made of glass, with all the hidden work as plain as the outer planking, and all the stressed as evident as though chalk marked. The majority of his schooners were two-masters, but he was not obsessed with any particular feature of design. He could build to suit any owner's fancy. Given a free hand he turned out a shapely model, with clipper bow, rounded quarters and square stern, good sheer, and large carrying capacity, and these vessels sailed well.

But if the owner wanted something very different, John Tait would give him what he asked. James and William Copper, those enterprising boys who came to Prince Edward County from Kingston with pedlar's packs on their shoulders and established themselves as merchants of magnitude, wanted small schooners wherewith to import their wares for their wharves, shipyard and general store , at South Bay. They, too, dealt in everything from needles to anchors, and used small vessels in collecting the farm produce which they bought, and in bringing in cordwood for their fuel dock, and drygoods, groceries, paint, oil, rope, canvas, chains, anchors and ships' hardware for their outfitting business. John Tait built for them the Jennie Lind and the Jessie Brown, both scow model schooners. The Jessie Brown was so shoal that when she went across to the Main Duck to bring home Capt. Walters' cattle that had summered there, they just ran her on to the bar at the mouth of the little island boat harbor, and dug a way through the gravel for her with their shovels. Capt. Nelson Palmateer, who made the voyage as a boy, tells the story with relish. That was the sort of work John Tait built the Jessie Brown.

JOHN TAIT, one of the master builders of Prince Edward County.

ONE OF TAIT'S SHAPELY SCHOONERS, the Phoebe Catharine, the white vessel in the foreground, wintered in Owen Sound sixty years ago. She was one of Tait's best models. 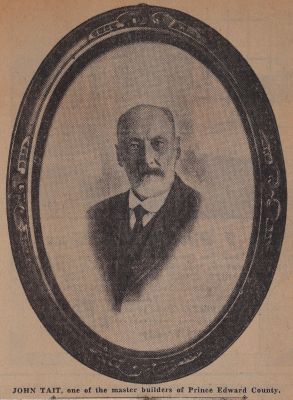