PERHAPS what accounts for the popularity of John Tait in Prince Edward county ship building was the fact that he was a draughtsman and designer as well as a master carpenter. He would earn fees of $200 or $250 for one night’s work at his draught board. This explains his ability to give owners what they wanted - either fast vessels or big carriers, or adaptable some special trade, grain, wood, lumber, or picking up cargoes in out-of-the-way ports with little draught of water.

David Andrews, of Napanee, wanted a vessel which would pack a big cargo, and he built him the round-sterned Delaware, one of the hardest steering schooners on the lake, but a grand loader for her size. Delaware was her second name, after she had broken several towlines and got ashore at Oswego. She was called the David Andrews and was a tow-barge at first, and always looked it. They coined this rhyme about her in Prince Edward, after she became the Delaware, and it lasted longer than she did:

“You may paint my sides black

You may paint my sides white

You may alter my name if you Will,

Of a dark stormy night

The Delaware had a hectic career and wound up heroically, after she had reverted to barge status. She was bought and sunk deliberately 30 years ago, in an effort to form a coffer dam in the St. Lawrence River to refloat some steamer stranded in a swift current. The steamer may have been the Rapids Prince. There she lies yet in the river. Her sacrifice was unavailing.

Before that, while she was still a schooner, she got ashore once in Soup Harbor. The place then had a bad name for wreckers. Capt. Bartley stood on the rail and shouted to the shore boats, as they approached, “The first man to put a leg over the side is going to be drilled so full of holes he won’t hold wheat.” He had his revolver out, and meant what he said. The Delaware was grain laden and he was afraid the shore people were going to strip and gut her. She was refloated and carried coal to Toronto as late as 1895.

They may have had nothing but the kindest of intentions, but the stories that went the rounds were grim. One schooner was lost at Soup Harbor coming one late in the fall and all her crew were drowned but one. The lone survivor begged the shore folk to keep a good lookout for whatever might be washing up, for he said, the whole crew had drawn their wages and bought watches and new suits and overcoats before leaving Oswego, so as to come home for Christmas looking spic and span. For himself this mild extravagance was all he had to show for a season’s work. Nothing was ever reported as coming ashore from the wreck. He was horrified later on to see a man in the pulpit, wearing a new suit which he was sure belonged to one of the drowned shipmates.

Again the Picton of Picton, three-hundred-ton schooner, which John Tait built for Hugh Gaw in 1867, was straight as a gun barrel and very fast.

She looked as though intended for a timber-drogher. These had straight decks for the easier carriage of squared timber. The Picton was small for that trade, but she piled out a great cargo of lumber and shingles.

So straight was this Picton that three seas walked over her without breaking, just as they would over a submerged crib. And so staunch was she that she came up tight as a bottle from such an ordeal, with half the lake gushing from her scuppers and freeing ports.

The was that night in November, 50 years ago, when Capt. Frank McMaster, her young skipper, decided that she was going home ahead of the Singapore, which lay in Charlotte with him, bound for Kingston. McMaster, drowned years later in the Emerald, at this time lived in Deseronto, and was loaded for home for the last trip of the season. The Singapore, new and spick and span, with her scrolled trailboards, was in a hurry to get home to lay up, and McMaster was going to show what a real hurry was like.

So the Picton towed out from Charlotte, George Bongard remarked to Eddie Bourke, the mate, as they were setting the main gafftopsail, “We’ll soon be back here with that tied up and not much set below it.”

Ten miles out the wind struck in from the northwest, screaming, driving a big sea before it. They began to shorten the Picton down. The main gafftopsail was clewed up and furled, but the foregafftopsail sheet jammed in the sheave at the gaff end and they could neither clew the sail up nor settle the foresail.

So they ran back for Charlotte, and entered the piers mostly under water, what with the unwanted press of sail and the straightness of the vessel anyway.

Still unable to get the foresail off her, they ran up the river at ten miles an hour. McMaster intended to let her drive into the mud bottomed yacht basin, but it was full of yachts not yet hauled out for the winter. So he zig-zagged for the opposite bank, then occupied by the iron foundry, but the slag piles and iron ore were too solid for her, and he swung her off the river again, blowing for the railway bridge to open till he blew the rim off the tin trumpet.

The bridge tenders either were not on the job or they had a train coming. Anyway they didn’t swing the giant iron bridge that spanned the river. The three-masted schooner Van Straubenzee was lying just below the bridge and Capt. McMaster made a desperate effort to catch her quarter as the Picton sloughed past. The Picton’s anchor fluke buried itself in the bulwarks of the Straubenzee, tore through five stanchions, and outvoted a timber and hurled it 25 feet in the air. It dropped within an inch of George Bongard as he hove a line aboard the Straubenzee and was taking a turn to check the Picton. But the line did not hold aboard the Straubenzee, or was cast off by her crew in the excitement, and the Picton drove on until her hickory jib boom connected with the west span of the drawbridge. George Bongard’s father had cut the spar for her in the bush 20 years before. She walked into the bridge as far as the foremast, parting her wire headstays like fiddle strings and snapping the fore topmast at the cap.

The 60-foot spar, with its threshing topsail that was the cause of all the trouble, dropped on the crew around the windlass. It missed the men by a miracle, and the windlass whelps diverted it from going through the deck and the schooner’s bottom. All the head gear was snapped and the jibs ripped to ribbons, and the stout old hickory was sawn almost through by the ironwork of the bridge - but the jib boom held. Capt. McMaster got the Picton back to Deseronto late that fall, bald-headed and jury rigged. With the foretopmast out of her and her head canvas patched and sewn in a dozen places she looked like a muley cow that had lost her horns in catching Joseph’s coat of many colors. But she lived 20 years more, until she went down with Capt. Sidley and all hands, scudding before a westerly gale on July 1st, 1890, off the same port of Charlotte.

But most of Tait’s models were both smart and smart looking, and some of his steam yachts had very graceful lines. The Phoebe Catherine, Heather Belle, Maple Leaf and Ocean Wave were all fine looking schooners, as was the Gearing, already spoken of. More than one of Tait’s vessels went to salt water or overseas. Besides the Pacific, the St. Clair, H.N. Todman and Heather Belle are among those those said to have gone abroad. They carried cargoes of grain to Nova Scotia and Newfoundland in 1871 for Messrs. Howland and Co. of Toronto and brought back coal.

The Picton of Picton in Gananoque, Ont. 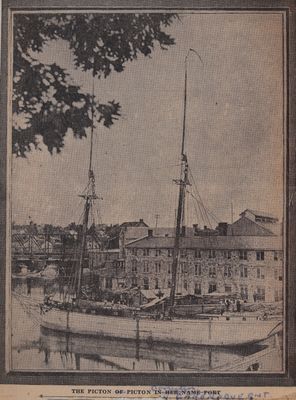