"IT WAS very interesting to me, to read your article of Jan. 2 of the ketch Ceres of Bude, North Cornwall, in The Telegram. I knew her well," says Mr. Geo. W. Barrett, sanitary and heating engineer, of Oakville.

"She was originally smack rig, quite similar to the Bristol Channel pilot vessels. Later she was changed into a ketch with a running or straight bowsprit, having one jib and staysail. This is how I remember her in my boyhood days about 40 years ago.

"The peg bowsprit and stem were put in her after she was lengthened. The original stem was straight, with a slight rake forward. The doghouse was also added, the only houses previously were the galley and the toilet on the side.

"There were several vessels in Bude with the same type bottom-very flat, and the sides coming up straight. This was for the purpose of laying on the sand in the harbor when the tide left it dry. The bow was very similar to the Nancy (as per model), very bluff; the Ceres would never go windward well when light.

"My grandfather skippered her a good many years ago and she had been owned by the Petherick family for three generations.

"There was very little, however, of the original hull of 1811 left when she was lengthened—she was practically a new boat. After the lengthening, I saw her slide into the water from Harry Stapleton's shipyard. She was truly a wonderful old ship and the last one to be owned in Bude. The Francis Beddoe, which you mentioned, often came to Bude, and was typical of ships built around that district 60 years ago.

Mr. Barrett produced an interesting photograph of Bude harbor in February of 1897 "when Bude was a real port," bearing out the reference in Schooner Days recently to the numbers of small sailing craft which used to throng the English coast. The photograph came from Petherick and Sons, Bude merchants. Capt. R. W. Petherick was sailing the now lost Ceres at the time the photograph was taken. She is included in it. There is also a little old-fashioned topsail schooner among the smacks and ketches. The names are interesting—Ant, Kindly Light, Wild Pigeon, Du I Win, and so on. The last is a Welsh name.

"In the great snowstorm of March, 1891," said Mr. Barrett, "many of the vessels of the Bristol Channel fleet were lost. The Ant, which, like the Ceres, dated from smuggling and privateering times, was dismasted and blown across the Bay of Biscay and foundered. One of her crew was frozen to death before the others were rescued. The Alford, a splendid ketch that always flew a flag with a rooster on it, being cock of the walk, was dismasted and blown across to Ireland, winding up somewhere on the Fastnet. The bottom of the Faith washed in near Hayle, with her crew all drowned, and the Agnes was also lost with all hands.

"Some time later the beautiful little barque Kishon which was being taken to Appledore for repairs, broke away and was blown in on the rocks. All her crew were rescued.

"I myself went sailing at a pretty early age. I was only three when my father took me away with him in his ketch, and I was with him afloat until I was ten. I wish now I had stayed with the sea. It is a great life.

"Speaking of the position of the mainmast of English ketches being near amidships, the old builders' rule in Bude was to step the mast one-third of the length aft from the stem. And in stepping the mast they always put a coin or two under the heel of the spar for good luck."

Mr. Barrett has been able to indulge his nautical taste to some purpose. He is a model yacht designer and winner of prizes in international contests.

"The Ceres, sailed about 90 years ago, by my grandfather, Capt. Geo. Barrett is, with the Ant, said to have been used by privateers and smugglers—both are shown in a photo 1 have of Bude harbor. The Wild Pigeon and Hawk, also shown in this harbor picture, were owned by my father, who was also Capt. Geo. Barrett.

"I was to have been willed the Wild Pigeon, but refused to follow I the sea and ran away from home, coming to Canada. But I have the Wild Pigeon's bell here, mounted on my verandah in Oakville."

Mr. Barrett also kindly lent The Telegram a series of five photographs showing the wreck of the barque Kishon of Appledore, and the others which appear here. That of the wreck of the Elizabeth of Bude is a remarkable piece of photography, for the camera has caught the lifesaving rocket in flight. It appears as a white flash in the upper right hand corner.

WRECK OF THE ELIZABETH OF BUDE—A remarkable bit of sea photography, showing the lifeboat and life-saving rocket in action simultaneously. 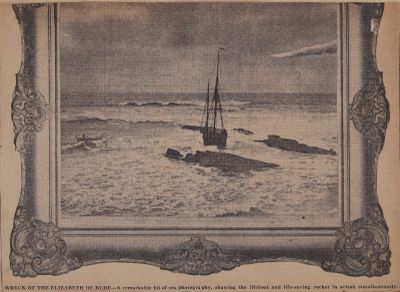