NAVIGATING for six weeks without a rudder, Captain George Corkum brought his big three masted schooner, E. P, Theriault, to a safe anchorage at LaHave one Saturday last month, and accomplished a feat of seamanship which will go down in history. The Progress Enterprise, of Lunenburg, N.S., says so, and we may well believe it. La Have is only a few miles from Lunenburg, on the Nova Scotia coast and Capt George Corkum is one of Capt Angus Walters' contemporaries. There are so many Corkums in Lunenburg that the eastern section of the place, near the waterfront, is called Corkum Town.

Forty-six days on the passage from Turks Island, with a cargo of salt for Lunenburg, the Theriault had one of the most trying and difficult times of her career. The schooner left the West Indies on January 27th and from then on one gale followed another in quick succession.

About 300 miles out of Turks Island the ship's rudder broke clear from the sternpost, floated up and washed away never to be seen again. With nothing but his sails to navigate with, Captain Corkum tacked here and there, taking advantage of favorable winds and often being pushed back by those that were unfavorable.

How, without a rudder. Capt. Corkum kept his vessel heading in the general direction of north and Nova Scotia is a mystery to sailors as well as landsmen. While he had south winds pushing him it would not be impossible, for if he kept sail on the forward end of the vessel she would drive or drift before the wind, and he might be able to correct her wanderings somewhat by towing hawsers of some other form of drags, from one side to the other. But when the wind came to blow from the north, as winter gales do, What then? Capt. Corkum wisely stripped to bare poles so that he would not drift back as fast and as far as he had come ahead. And how, with this uncertain weaving back and forth sometimes to east of his true course and sometimes to the west of it, and sometimes being pushed back altogether, could he determine what course would ultimately bring him as close home as LaHave — even could he steer it?

If ever Capt. Corkum comes this way his story of steering the Theriault home will be a good one. The Huguenot family name she bears, by the way, is usually pronounced Terrio. Many Huguenots settled in Lunenburg County when driven out of France.

Capt. Corkum made little of his feat when telling his fellow-townsmen about it. He probably said much the same as Angus Walters when I asked him how he sailed to Naples with a load of dried fish, never having been there before.

"Father taught me navigation," said he, "and I just kept on till I got there."

The steering apparatus of the schooner was not used from the time the rudder went and no jury rudder was fixed up. The schooner was steered with her sails. When the wind was fair, the head sails were the only ones that could be used; when the wind was on the beam, the foresail, mainsail and storm sail were added. When the winds were adverse, all the sails were taken in. Up to the time the schooner arrived off Hatteras it was possible to get an observation every day so that the exact position could be determined, but after that they could only get a shot every two or three days. Gale succeeded gale, and while the weather was rough it was not severely cold. In one of the gales, the seas boarded her from stem to stern.

Shortly after the schooner had lost her rudder, the Lunenburg motor vessel Jean and Frances, in command of Captain Kenneth Iversen, was sighted, and she came over to the Theriault, who was flying a distress signal. The Jean and Frances was en route to Panama and had only supplies sufficient to last her voyage, so that they could give nothing to the crew of the Theriault, and as there was nothing else they could do, they proceeded on their way to Panama.

The Dutch freighter Amazone was sighted on the 15th of February and gave them sufficient supplies to carry them along. By this time most of the supplies of the Theriault had been exhausted. The cook stove had been moved aft and- the-members of the crew all bunked aft, so that the one fire would do the cooking and providing heat for the entire crew, and they all ate at the one table in order to effect a further saving.

The Theriault arrived off LaHave on the 13th March, 46 days out from Turks Island, and was towed up the LaHave River by one of the Government patrol boats.

The E. P. Theriault is 17 years old. She was built at Weymouth and is now owned by Archibald Publicover of LaHave. She carried a cargo of 10,000 bushels of salt. There was no insurance on the vessel, and when asked if there was ever any discussion of abandoning the schooner, Capt. Corkum said the matter was thought of but they decided to stick by the ship, as in the event of their abandoning her there would be little possibility of collecting their wages.

The schooner is now in Lunenburg and will be hauled on the marine railway for repairs. Capt. Corkum has been going to sea for 42 years and has been a master mariner for the past 16 years.

Capt. Corkum made more of picking up a passenger than of picking up the land at the right spot. "One of the unusual incidents of the voyage occurred about 245 miles off Cape Hatteras," said the Progress- Enterprise, "when a pure bred homing pigeon lodged on the rigging and refused to leave. On its leg was a band bearing the inscription 315 IF 36 W. D. C. The bird was brought to Lunenburg and Capt. Corkum will notify the owner, who apparently lived in Washington, D.C."

And the biggest incident of the forty-six days was off stormy Cape Hatteras, when The Dutchman gave him, not a new rudder nor a tow, but enough food to bring the three-master home.

"It was a lucky day for the Theriault's crew when about 300 miles off Hatteras they sighted the Dutch freighter Amazone. After days of battling storms and with little prospect for a fast passage, provisions were running dangerously low. The Dutchman was spoken and sent aboard sufficient supplies to last the crew for the remainder of the passage."

Such a feat as Capt Corkum's, in bringing a vessel home without a rudder for over a thousand miles has certainly never been equalled on the lakes. In the first place, it would be impossible to sail so far without striking land, no matter where you started. Lake Superior would give you the best chance, and there you might possibly get a four hundred- mile stretch, with a little angling. Rudders have been lost on the lakes, and the vessels to which they belonged have been saved, but not very often, because the land is always so close that the unfortunate ship has little chance of escaping it. The steamer Emperor, which lost her rudder in a heavy gale on Lake Superior last November, was fortunate, indeed, to be able to steam and drift clear of the beach until picked up by tugs.

Capt. Alfred Thomas, known as Black Jack in his palmy days, lost the schooner Flora, of Picton in 1894 after a plucky attempt at getting her into port with her steering gear gone. Her rudder hung on, but some part of her wheel gear connected with it went, and the Flora was without a helm. He steered her by her sails alone right to the mouth of Oakville piers. When she was within a hundred yards of safety a sea twisted her past the narrow entrance, and she piled up on the shoal to the westward and became a total wreck.

The schooner Reuben Dowd, wrecked on Toronto Island in 1906, was lost because she jolted her rudder out of the gudgeons when she touched a shoal off the Eastern Gap. She drove in on the beach in moderate weather, but a gale was making up, and the sea destroyed her before she could be got off.

Capt Alex, Ure brought the schooner Augusta a hundred miles up the lake in an increasing gale in November, 1899, with the head of her rudder broomed off where the quadrant should have gripped it. He kept her on her course by adjusting his sails, and gained some measure of control by bringing the backing-chains, which are used to hold the rudder rigid, in through the quarter-chocks, and heaving on them with tackles. But in the thick snow he could not tell when to haul her in under Toronto point for shelter, and the first thing he knew Port Credit light blinked through the flakes over his shoulder, and the rudderless Augusta hit the beach near the brick works.

Capt. Sam Masterson once worked a vessel home, after losing his rudder, steering her by lowering one end of the yawlboat or the other, as required. The half of the boat in the water acted as a drag, and caused the vessel's head to turn in that direction. But it was killing work on the crew, for all hands were required to hoist the boat in those days. This was before the donkey engine or "iron sailor," up forward came to lighten the labors of the holders of the "Armstrong patent." 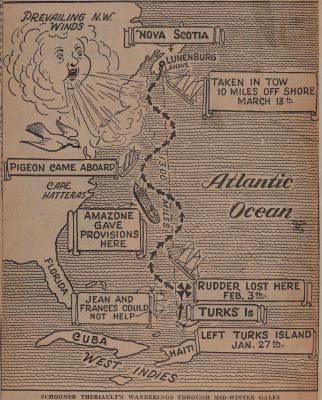