Rye and Barley Times in the Bay of Quinte: Schooner Days CCCCIV (294)

FRIEND T. W. Rose, of South Bay, recently gave a charming picture of the opening of navigation in the Bay of Quinte half a century ago, when barley was Prince Edward County's great export He wrote in the Picton Gazette under his favorite nom-de-plume, "Doghouse Boy." Doghouse was a pet name for the forecastle, and Mr. Rose was in the forecastle of many a Prince Edward vessel in his time. His father before him, Capt. Alva Rose, sailed vessels out of Port Milford, South Bay and Picton, and he knows whereof he speaks.

The Bay of Quinte is a great ragged Z, the bottom bar being the Adolphus Beach, running down to Kingston and the open lake, the diagonal being the Long Reach, from Picton to Deseronto, and the upper bar leading through the Telegraph Narrows on past Belleville and Trenton to the Murray Canal and so to Lake Ontario again by way of Presqu'ile. At the time of Mr. Rose's story the Murray Canal had not yet been cut through, and vessels bound, to the westward from the Bay of Quinte had to run the Belleville Reach, the Long Reach and the Adolphus Reach as far as the Upper Gap, where they steered south for the open lake and entered it at Point Traverse. Then they would haul back to the westward. This is why, as mentioned in Mr. Rose's narrative, the Freeman and the Persia, bound westward up Lake Ontario, Lake Erie and Lake St. Clair for Walkerville with rye for the distilleries from the upper part of the bay, had to run south and west past the Fabiola when she was anchored at the turn off Deseronto. They had to go to the Welland Canal by way of Lake Ontario from Point Traverse.

"Captain John's Island" mentioned by Mr. Rose was so named for an early Loyalist settler, Capt. John Vanalstyne. For at least forty years it has been known as Foresters' Island, the late Dr. Oronhyatekha having bought it and established a large summer hotel there, years and years ago. It is opposite Deseronto, at the turn of the Long Reach from northeast to west, It has always been exciting to see the topmasts of vessels in the opposite reaches moving above the treetops as they skirted Captain John's Island, As they emerged and their hulls showed, turning around the corner, it was like ringing up the curtain of another play.

Glenora, at the commencement of Mr. Rose's narrative and voyage, is a lovely spot towards the opposite end of the Long Reach, before you come to Picton. It is on the south side of the bay, where the Adolphus Reach makes the turn into the Long one. Mosquito Bay, where Mr. Rose was bound—fortunately at a time before these pests began business for the year—is in the upper or Belleville Reach, beyond the Telegraph Narrows.

Sorry for all this long delay in getting Mr. Rose under weigh, but here he goes past Glenora—"that beautiful little hamlet nestling at the foot of the high hill which skirts the shore of the famed Lake on the Mountain, and at this time was composed of a flour mill, a plaster mill, a machine shop, a turbine water wheel foundry and a spring horseshoe factory, a large boarding house, store and many houses, which sheltered the many men and families who made their living working there.

"Had you been on the shore of the Bay of Quinte early in the morning of Sunday, April 21st, 1889, a few miles east of Glenora, you would have seen that trim little schooner the Fabiola of Picton, as she tacked back and fourth against a light breeze in an endeavor to get around Young's Point. Captain Pete Ostrander was in command, with Lew Ostrander as mate, Marcus Lobb, Dick Gilmore and myself before the mast, with my better but lesser half as cook. She was a very good cook when she wasn't seasick, which she unfortunately was most of the time, especially when we were in Lake Ontario.

"In due time we reached Young's Point, and heading clear of the projection, we eased the sheets for the run through the Long Reach.

"As the morning advanced the wind increased and swiftly we passed the mouth of Hay Bay, Thompson's Point, Camp Louise, Roblin's Cove and Cole's Wharf by which time we would have to luff the little schooner to some of the strong puffs as they would sweep over those high banks, the wind increasing all the while.

"You would wonder where the wind was coming from as the sky was bright and clear with not a cloud to be seen, We were on our way to Mosquito Bay to take on some barley and I wondered what the captain would do when we got to Deseronto, after which the heavy wind would be right on our nose, but when we got to Capt. John's Island, he brought her head to the wind and dropped the big anchor with a long range of chain. Soon we had the sails all down and snugly tied up, with nothing further to do, but look forward to our Easter dinner, which was well supplied with the customary supply of eggs. Capt. Pete was liberal in supplying the board.

"Dinner over, we had nothing to do but watch for anything which might be on the move on the bay. Somewhere farther up the bay we knew there were two vessels, each picking up a load of rye for Walkerville, We wondered where they might be. Shortly after dinner, as we frequently cast glances up the bay, we were rewarded by seeing the topmasts of a vessel over the island coming down through the narrow passage past Telegraph Light. And wasn't she coming, carrying her mainsail on the starboard side, and with the main sheet well out! It proved to be the "D. Freeman," in her new coat of white paint, carrying her load of rye. Capt. Nat. Allen was in command, with little Will Ostrander as mate and Let. McCrimmon, Frank Farrington, D.W. Gillespie and one more before the mast.

"Poor Let. He was drowned from the Fleetwing one early spring voyage five years later. The cook in the Freeman at this time was Miss Vandusen, a sister of Capt. T. L. Vandusen, who was drowned when the ill-fated Oliver Mowat was run down.

"We wondered if they would drop anchor or go on with the wind blowing so heavy for the new course. We hadn't long to wait. As they ran down abreast of Deseronto, they had to get their mainsail on the other side if they went on, and gybing was out of the question. We saw them put the wheel down and around she went like a yacht, and pulling in their sheets on through the Reach she went. She had tacked instead of gybing and now had her sails on the proper side. Capt. Nat had a good schooner and he kept everything in good repair. How that schooner would cuff those three choppy seas, the spray would fly clear over her— a sight it was to gladden the eye of any lover of a sailing vessel. Soon they were hidden from sight behind the high banks of the west shore of the Long Reach.

"In about two hours we were rewarded by seeing the topmasts of another vessel coming down the bay in like manner as did the Freeman. This proved to be the schooner Persia, in her coat of black paint, in command of Capt. Dave O'Hagan, She also had completed her cargo of rye for Walkerville, in the upper part of the bay, and plain it was there was a race on as to which would get to Walkerville first. Again we wondered what the Persia would do. Would she go as did the Freeman? Running down abreast of Deseronto they brought her head to the wind and let go the big anchor, there apparently being too much wind to go on through the Long Reach, Subsequently we learned the Freeman passed through the Reach and down past Glenora and somewhere along the Adolphustown shore they dropped the anchor and spent the night. Which schooner reached Walkerville first I never learned.

"Early next morning we were astir. The wind was from the same direction but had eased down to a light breeze, having "blowed out" during the night. We manned the windlass and began heaving in that long range of chain. Aboard the Persia, which lay about a half mile away, they were going through the same routine as we were. When the anchor was short, then the main sail was hoisted, then the foresail.

"After some consultation we saw them lower their yawl and go ashore for another lantern in Deseronto. By the time they got back aboard we were well up toward Telegraph Light. We wended our way on up to Mosquito Bay and got on board what barley was in store.

"The next day, Wednesday, the 24th of April, we lay at anchor at Deseronto and had repaired a broken block strap. The following day,Thursday, we finished out our cargo at Allison's storehouse, a short distance east of Glenora, and so sailed on for the open lake. We delivered it at the Great Western elevator at Oswego on the 26th day of April, 1889."

ABOARD THE D. FREEMAN when Capt. Will Savage had her, some time after the episode here mentioned. 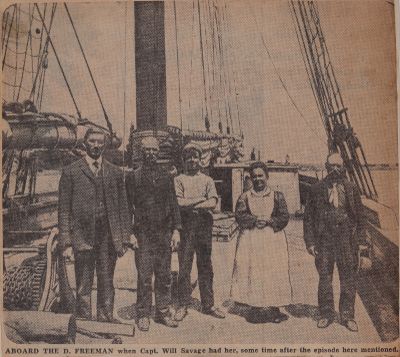