I HAD an unusual experience when I was master of the ocean going tug "J. O. Gravel," owned and operated by the Roger Miller Company, of Toronto, in the construction of the Car Ferry Terminals, at Carleton Point, Prince Edward Island, writes Wm. J. Stitt, master mariner, from his home at 138 Evelyn Crescent, Toronto.

This story has to do principally with the three-masted schooner "Annie M. Parker," which loaded lumber up at Campbellford, N.B., late in the fall of 1915, and was en route from that port to New York when she ran into a real nor'easter near North Point, Prince Edward Island.

Anyone who knows this particular part of the Atlantic coast can tell you what a mighty bad place it is, as the wind has the full sweep of the Atlantic, and, with the strong tides, makes it one of the worst spots to be caught, and especially with a blinding snow accompanying the wind. The tide sweeps in from the broad Atlantic towards the narrows, called Northumberland Straits, and gains strength every minute during the six hours of rising, and with the northeast gale behind it on that particular night it was some demon to be reckoned with. The tide runs towards the New Brunswick shore, coming in, and it is always a battle for the sailing schooners to keep from being swept ashore before they clear Cape Bald, some twenty miles southwest of North Point.

It was late in November and bitterly cold when the Parker ran into this gale, about 11 p.m.; it had been clear up till then and they had seen Cape Egmont light flashing at regular intervals. The glass had been going down all afternoon and the weather threatening, but the captain had hoped to make the Straits before the storm struck. Two hours more would have put him in shelter behind Cape Egmont and safety. When the storm hit him all hands were turned out to shorten sail, which was no picnic in that blizzard, for it came on snow almost at the same time.

As is customary on those waters, the sea makes up very quickly, and it was no time till they were piling right over the stern and threatening to smash everything to pieces. The weather board was put up across the stern to protect the man at the wheel, but he might just as well have deserted the post for the vessel was unmanageable in those mountainous seas that picked her up like a chip and carried her forward towards her doom. The crew got part of the sail off her and had to give up, for ice covered everything almost to the crosstrees. Everything in the cabins was knocked down and broken, and part of the deckload went overboard, which gave her a bad list to starboard. Fires were washed out in the galley and there was three feet of water over the floor. What the crew suffered during that night only they know. Wet to the skin and almost frozen stiff and constantly being covered by the icy spray that smothered the vessel.

At half-past three in the morning she struck heavily, but the seas lifted her and drove her on again until she finally came to rest, and the great billows came crashing over the stern and smashed the cabin in and finished the destruction of everything inside, and went tearing into the hold and filling it completely.

This had a steadying effect on the vessel, and held her solid on the bottom. When she struck the crew were driven to the forward end, where they had some protection from the wind and snow, but being soaked to the skin and it bitterly cold their suffering was intense.

She hit at high tide and was some thousand feet almost directly off the Cape Bald dock, used for fishing boats. The crew, however, knew nothing of their whereabouts until the snow stopped around 6 a.m., when they were able to see the. big R.C. church towering up almost directly in front of them. The wind went down with the tide, and at 7.30 a.m. a fishing boat was able to take the crew off, and they were furnished with food and dry clothing and medical care as some of them had their feet frostbitten and were in bad condition in other ways.

At Point Duchene, N.B., twelve miles northwest of Cape Bald, we were lying in for favorable weather to take our tow down the Straits when a messenger came up from the scene of the wreck to see if we could pull the "Parker" off into deep water at high tide after pumping the water out of the hold.

Arrangements were made with our company to try and float the "Parker," so we despatched a large lighter in tow of the company's small tug, "B. M, Fraser," with pumps to take the water from the schooner's hold, and unload the remainder of the deckload of lumber to lighten her a bit. The wind and sea had gone down, so we got away with our tow for Carleton Point and Wallace, N.S. When we returned the following night the "Parker's" deck load had been taken off and the water pumped from the hold.

At the next high tide we were at the site of the wreck, but found we could not get within 1,400 feet of the vessel owing to the deep draft of our tug. We had 1,500 feet of towing cable on our drum, so had our small tug Fraser run it to the stern of the "Parker" where it was made fast, and we commenced pulling, but without success, and the schooner would not budge an inch, being buried in the sand caused by the heavy northeast gale shifting it around her.

We decided then to try and dredge her out with the tug Gravel's propeller, By constantly pulling in on the Gravel's towing machine and swinging the tug back and forward we cut a channel the entire 1,400 feet right up to the "Parker's" stern, 150 feet wide and 15 feet deep. By moving our cable to the forward part of the "Parker" we were able also to make a deep channel along one side of the vessel with the hope that we could roll her into it. Before we could get to this part of the job the weather set in bad from the northeast again, and to prevent being trapped ourselves in this small channel we had to beat it out to deep water, taking the "Parker" crew with us. We then towed the lighter with the "Parker's" deckload to Point Duchene.

Weather continued bad for a week, and being late in the fall the "Parker" was declared a total loss and abandoned to the insurance company. However, in some ten days' time the balance of the lumber from the "Parker's" hold and all the vessel's gear was removed and taken to Point Duchene. The vessel was left to her doom to be destroyed by the elements or the tooth of time.

Storms beat over her and froze as fast as they fell until she resembled a huge iceberg. Ice also froze around her that extended some 200 feet, and as the tide rose and fell twice in every 24 hours the ice kept getting thicker and thicker, and became a giant pontoon. One night in January when an unusually high tide came in it lifted the frozen "Parker" bodily off the bar and carried her away down the Straits like a real floating iceberg, The inhabitants of Cape Bald awoke that morning and were amazed to find the wreck had disappeared, they crowded the shore, but could see nothing as a heavy mist hung over the water.

Prince Edward Island, our smallest province, is 125 miles long and about 7 1/2 miles wide. The water lying between P.E.I. and New Brunswick is known as Northumberland Straits. The tide has a rise and fall of 7 feet on an average. It comes in from both ends of P.E.I. and meets about half way at the narrows between Carleton Point and Cape Jouramin, nine miles distant, which is known as the dead line. When the tide goes out it goes each way from this dead line. This is always a nasty spot in dirty weather, and especially if caught among floating ice as the ice coming together here would crush a vessel like an egg shell.

The "Parker"' drifted south towards this deadline, and by a miracle crossed it, although the Straits were packed with heavy ice. She must have hit the outgoing tide and continued going south, and when the weather cleared so that one could see some distance across the water she was sighted off Point Prim, near Charlottetown, P.E.I., the second day after taking her departure from the sand bar at Cape Bald.

The "Parker" continued to travel up and down the Straits with every incoming and outgoing tide, until early in March, and hundreds came to see this spectral ship wreathed in ice, a real derelict. It is surmised that she finally reached the deadline when the tides were at their greatest and the ice floes the heaviest and was crushed like so much gingerbread and sank to the bottom of Davy Jones' locker. No one saw her finish, but it's a pretty sure guess that the above was what happened to this once famous old schooner.

ABOARD THE WRECK WHEN THE TUG "GRAVEL" WAS CHEWING A 1,400-FT. CHANNEL WITH HER PROPELLER 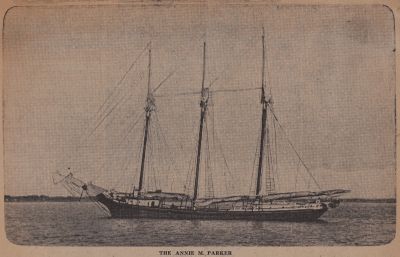 Aboard the wreck
Groups of Related Records