ONE after one the old wooden grain elevators, whose dark red pagoda-like outlines used to landmark every lake port, are passing from the picture. They used to be so common, evidences of Canada's growing proserity in wheat. Even a little harbor like Bronte had one. It may still be in existence, much changed, for it was floated down to Toronto and used for a storehouse in the corporation yard at the foot of George Street. Port Credit had several. There were three or four big ones on the Toronto waterfront, all gone years ago and replaced by the much bigger structures with cylinders of concrete, making them look like pipe organs.

The latest to go is the oldest standing wooden elevator, the second one built at Collingwood. It handled its first cargo of grain on Sept. 16th, 1871, and the town had a big celebration when the elevator leg dropped into the hold of the schooner Potomac, swimming deep with 16,000 bushels of grain from Chicago. Fifty years later to a day the elevator discharged the steel steamer Clement E. Reiss, from Chicago with 258,000 bushels of corn under the hatches. And the Reiss is only a piker compared with such grain-toters as the 600,000 bushel Le Moyne.

Big steel ships indirectly doomed the old wooden elevators and the old wooden schooners, "barques" and "brigs." The Collingwood elevator was closed last September, after sixty-five seasons' service, because the Bacon Grain Company of Chicago, operating it, did not find it possible to get the great 500-footers up to the elevator dock with the low water prevailing. The water has come up, but the business has gone down for the third time.

Forty or fifty schooners like the Potomac used to trade between Chicago and Collingwood, making a trip a week at the best—although the old "barque" Malta once made the run in fifty hours. The LeMoyne would take the cargoes of this whole fleet in one trip - but she would have to have water to do it, and the water just wasn't there, what with lack of dredging or hard-pan bottom, or the Chicago drainage canal operating.

William Hanley, bin boy in 1871 when the Potomac commenced to unload, became superintendent of the Collingwood elevator in 1921, and is now watching the wreckers dismantle his lifelong work-castle. Proving that elevating is not an unhealthy job, nor one without a future. In his lifetime the elevator handled 200,000,000 bushels of grain, a product of 8,000,000 acres, which would fill a train of grain-cars stretching from Chicago to Quebec. This elevator was not Collingwood's first, though it may be its last. The first elevator was going strong in 1856. The elevators marked the efforts of the old Toronto, Simcoe and Huron and the Northern railways to compete with the Grand Trunk in the New England grain trade. The grain was elevated from schooners after arriving from Chicago or Port Arthur and hauled across Ontario to the Northern elevator in Toronto, or to the elevators in Kingston. Here it was reloaded into schooners and barges and sped to Montreal or Ogdensburg. When the Grand Trunk bought the Northern in 1888 business at the Toronto elevator slumped, but Collingwood continued to gather up the golden grain and transfer it from schooner-hold to grain-car, on into steamer days.

In schooner times, Collingwood was a grand arena for all interested in masts and sails and hulls and bunting, and its elevator was, so to speak, a ringside seat.

Many a tale Capt. James McCannel, just retired, has to tell of the schooner fleets of his boyhood, centered around the great elevator, which, like that great sailor, has just closed an honorable career. Only, unlike Capt. McCannel, the elevator is being broken up. Capt. McCannel is going strong on a new bridge—the lecture platform.

He can tell you of the endless races between the Erie Belle and the Yankee Blade, in the grain trade between Chicago and Collingwood. To get to the elevator first might mean saving a day or a week getting unloaded, Sometimes the vessel first into the elevator would be back with her second cargo while the next vessel was finishing unloading. With wages running on, every stitch was spread and the sails would be wet down from masthead to deck to get the craft's lines out on the elevator spiles ahead of the other fellow's. The rivalry between the Erie Belie and the Yankee Blade was all the more intense because one was a Canadian, a double-topsail "barque" built at Port Ryerse for John McLeod, and the other an American. The Yankee Blade foundered off Skillagalee Light in 1883; the Erie Belle went down in Lake Ontario in 1920.

Capt. McCannel recalls one fine Sunday in July, 1884, when from the hills of his boyhood home he watched the American schooners Homer and Red White and Blue come flying along wing and wing, each with her colors streaming wide and her fly struck for the overworked harbor tug. They had left Chicago on one towline, casting off outside for an even start, and had furrowed five hundred miles of fresh water, sometimes together and sometimes apart, to end up here in a dead heat.

They were so even that the tug man hailed he would take both at once but neither of them until they had shortened sail, and he kept his word. They found the elevator pier already lined with vessels, unloading or waiting to be unloaded, and after all the hard driving a tossed quarter had to settle which was to have the first chance—when it should come. The Red White and Blue won the toss. She was a large handsome schooner, painted as named, in three broad bands of color. She was launched at Madison, Dakota, in 1863, when the American Civil War was at its height and "three cheers for the red, white and blue" had become almost a national anthem. The chorus is from Davis Taylor Shaw's song — originally Britannia, later Columbia, the Gem of the Ocean. The vessel was wrecked on Whaleback Shoals in 1895.

The Homer, another three-masted schooner, equally handsome of line, was painted lead-color, appropriate to the hoary bard. Her bones are decaying at the Sawmill Dock, Sailors' Encampment, near the Sault.

Collingwood had as many American schooners calling as Canadian — perhaps more — in the great days of the grain trade. There was the Morning Star and the Flying Cloud and the Metropolis and the Grace Greenwood; the Rising Star and the Flying Mist and the Resumption and the Sunrise and the Golden West and the Ada Medora and the Oak Leaf—a beautiful black brigantine; and the Golden Fleece, and many another, all Americans. The Golden West of Milwaukee came to grief on the Shingles, near Cove Island, in 1884. The Golden Fleece of Chicago, built in Cleveland, was wrecked at Erie, Pa., on Thanksgiving Day, 1887, and her captain shot the man at the wheel when she grounded trying to get in.

The Canadians included the Lady Dufferin and Lady Macdonald, Queen of the North and Edward Blake, Erie Belle, Goldhunter, Restless, St. Louis, Jas. G. Worts—both of Toronto— Midland Rover, a renamed American, once the Philo Scoville and again renamed that— Heather Belle, Caroline Marsh, Jane Ann Marsh, Mary Ellen Breck, Phoebe Catharine, and the little Mountaineer and scow Garibaldi, which gathered their grain on the adjoining county shores. The Jane Ann Marsh, by the way, did not break up when she went ashore here at the Eastern Gap. She was refloated and taken to Owen Sound, where she ultimately left her bones.

All the Americans were not plaster saints, nor for that matter were some of the Canadians. Collingwood still chuckles over black-whiskered Davy Hunter, king of the Welland Canal and second mate of the Malta, and how he secured the release of his crew from the police court, without bail, when the schooner was ready to sail. He threw them out of the courtroom window and booted them down to the dock, in a general free-for-all in which the town police force (two men), the volunteer fire brigade, a dozen visiting lumberjacks and a mob of sailors were mixed indiscriminately.

One night late in the fall, when the snows of November were whirling so heavily that the outlines of the big elevator could not be distinguished, a shot rang out aboard one of the vessels sheltered under the lee of the spouts. The night watchman who heard it looked and wondered, but it was snowing so heavily he could hardly catch the loom of masts showing that the schooners were still there, Three of these masts began to move—and in the morning the American schooner Millard Fillmore, which had been waiting for weather after unloading, was not to be seen. She had vanished in the snowstorm.

Next spring, in the slip where she had lain, the body of an unknown man was revealed as the ice melted. He had a bullet in him.

COLLINGWOOD'S SECOND ELEVATOR, BUILT 1871, NOW BEING TORN DOWN, and some of the schooners that used to fill it. Left to right, the Julia B. Merrill, John H. Meade, Lake Forest, Bertha Barnes, J. Loomis McLaren, Minnie Slausson and Lottie Wolf, only the mizzen masts of the two last named showing on the right, above the hull of the steamer Baltic. All these schooners were American built, and, at the time of the photograph, 1888, American owned. 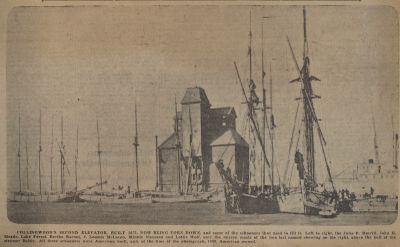