It happened here just a week ago, when the steel barque yacht Fantome II lay at anchor in Toronto Bay, centre of an admiring swarm of smaller craft, many of them yachts of international reputation, all intensely interested in this wearer of the regal purple and fine linen of yachtdom—the white burgee with the golden crown and St. George's cross, indicating membership in the Royal Yacht Squadron, at her main truck and the White Ensign of the Royal Navy, which "the" Squadron is permitted to share, at her taffrail staff.

The crowd of small craft kept a respectful distance. The steel barque yacht Fantome II maintained that distingued air of aloofness which was anything but characteristic of Commodore Gooderham's flagship Oriole III., when she lay in the club lagoon eighteen years ago, flying the Royal Standard. Oriole III. was surrounded by a floating bridge of rowboats and canoes, pressing to her milkwhite sides of manganese, while a tired but cheerful young man with yellow hair reached a willing hand over the bulwarks and surrendered his aching fingers to the enraptured grasp of hundreds of young people like himself. Think as we may about the abdication of Edward VIII, we have f all a spot in our memory kept warm by recollection of the smiling Prince of Wales in Toronto in 1919.

This haughty steel barque yacht, Fantome II, with 'R.Y.S.' as sufficient port-of-hail on her gold-leafed stern, was born in the town of Nantes, on the Loire, in France, in the year 1896. Her parent was the shipbuilder Dubigeon, and she was christened Belem, and "bound out," so to speak to a French shipping firm. In plain English, they owned her. Her original dimensions were: length 167 feet, beam 28 feet 8 inches, depth of hold 15 feet, registered tonnage 611.

Compared with the schooner Stuart H. Dunn, the largest three-master we had on Lake Ontario, this Mademoiselle Belem was of almost the same length, but she was of 50 per cent, greater tonnage, owing to her deeper hold and broader beam. She was also slightly larger than the schooner Red, White and Blue, of which we wrote last week. The Red, White and Blue, by the way, was not built at Madison, Dakota, but at Madison Dock, and measured 157 feet on deck, 30 feet 6 inches beam, and 13 feet in the hold. Her registered tonnage was 447.

The owners of the Belem had no ambitions of decorating this step-child or apprentice with the white burgee of the R.Y.S. or the blue of the R.C.Y.C., if they have ever heard of either, so they put her to work earning her own living and dividends for themselves.

The job they got for her had nothing to do with the perfumes of Arabia either. It was carrying nitrates from Chile or Peru. Nitrates have been manufactured there in vast quantities for countless ages by industrious seabirds, and are or were most useful in restoring the fertility of the crop-exhausted fields of Europe. The trade was not exactly a white flannels job, but in 1896 sailing ships had to take what they could get in the way of cargoes and like it. The nitrate trade flourished until the Germans commenced extracting nitrates from the air, and then -

Well, the Belem was due for the boneyard, not because she was old or worn out, but because there was no place else for her to go. This was before that Finnish lifesaver Capt. Gustav Ericsson had come to restore the reeling ranks of sail.

But do not despair, Cinderella! Prince Charming is at hand.

The Prince who came to the rescue of the grimy little French barque was the sporting Duke of Westminster. He went high, wide and handsome, and to create a yacht out of this nitrate carrier was just one of his fancies. A la King Cophetua and the beggar maid, he made the disconsolate Belem the partaker of half of his dukedom, all of it for that matter. He must have spent a fortune making a lady out of her, but he succeeded, as far as paint and gold leaf, brass, teak, mahogany, and a big bank roll could do it. She had good lines to begin with; the painted ports, scrollwork and decorations enhanced them. The superstructures which were added were in part concealed by her high bulwarks—too high for a short sailor to loaf over in comfort. They were also designed with good taste.

As much would not be said by all for the stovepipe extension of the mizzen masthead, to carry off engine exhausts, nor for that white balustrade of close-packed carved posts which form her poop-rail. The tern schooners of the Maritime Provinces have these latter, but not so vaselike in shape nor so close together, and what is appropriate in a wooden vessel often looks out of place in steel. Some sailors scoff at this "picket fence" or "marble peristyle," but if that was what the Duke of Westminster wanted, why shouldn't he have it? The bills came to him.

That was just the trouble. Like other ladies who have found protectors the Belem proved very expensive, and she was still far from the snug haven of a permanent establishment. Her duke vanished from her holystoned quarterdeck, and she woke up to discover herself the possession of Col. the Hon. Arthur E. Guinness.

And she was lucky to do so. For any converted craft to find a purchaser who will keep her in the state to which she has just become accustomed is a rare piece of good fortune. Usually the convert passes back to her original state or worse. Col. Guinness lavished luxury upon the ex-nitrate ship. She went places and saw things never dreamed of when Papa Dubigeon parted with her in Nantes, no, nor when the ducal fancy laid on the gold leaf.

What other barque—real barque, that is—has cleft the waters of the Great Lakes, from St. Lawrence to Superior, ice cold and crystal clear? What other barque yacht has borne the burgee of the Royal Canadian Yacht Club? Col. Guinness gave the former French lass an honored name, Fantome II. The word, as you may know, is French for phantom or ghost, and Col. Guinness had already had a Fantome, a 300-ton schooner yacht with a great reputation. She was a bit small, don't you know, for long ocean passages, around the bally planet, and that sort of thing, which were to Col. Guinness' liking, so he replaced her by this barque of double the tonnage and carried with him the favorite name.

What other barque, we asked, had cleft the waters of the lakes? Hundreds of "barques" so called, but it is to be doubted if one of them was a true barque. Fantome II is, and perhaps she may serve as an object lesson in rigs and nomenclature.

We had many commercial vessels on the lakes which claimed the name of barque, but few if any qualified. The queerest sample was the stone-hooker Barque Swallow of Port Credit, so registered and so named on her sternboard. The Swallow was not a barque at all, and did not even have three masts. She was a little two-masted schooner, built like a box, and first used for hauling sand for the Jail at the foot of Berkeley Street, a hundred years ago. An old salty named Sponton fitted her out and gave her a square topsail, and that was the excuse for the "barque" part of her name.

Many of our lake "barques" had little better claim on the appellation. A barque is a vessel with three or more masts, square rigged on the first two and fore-and-aft rigged on the aftermost one. All lake schooners which had three masts and any pretense at square canvas on the foremast tried to be known as "barques," even if they had nothing but a squaresail or a three-cornered raffee forward. They were at best topsail schooners, not even barquentines.

We had some true barquentines, many of them in fact, but these also wrongly laid claim to the name "barque." The difference is that the true barque has square sails on her mainmast, from truck to deck — like Fantome II. — while the barquentine has a fore-and-aft mainsail and gafftopsail on the mainmast and mizzen and a square-rigged foremast.

A peculiarity of the Fantome's rig is that her topmast, topgallant-mast and royal mast on the fore and main are all in one piece. Everything above the lowermast head on the mizzen is in one piece also, out this is customary with barques. The mizzentopmast is a long pole, more useful for a lead for the braces of the upper sails on the mainmast, or for showing the ship's signal flags, than for spreading sails. The gaff-topsail it carries is of comparatively small area, and apparently Fantome II has none at all. Most barques have topgallant masts fidded on to their topmasts, being separate spars. Those with spars on the Fantome's plan are often called "jackass barques" or "polaccas" and are usually very small vessels.

So many readers have expressed a desire to see Fantome II. under sail - her sail covers looked to be fixtures while she was on fresh water — that The Telegram is very glad to reproduce this picture of her, which shows her barque rig complete, with everything set—jib and flying jib forward, forecourse, fore lower topsail, fore upper topsail, fore topgallantsail, and fore royal on the foremast, five similar sails on the main- mast, spanker and space for spanker are usually very small vessels.

Col. Guinness presented the Royal Canadian Yacht Club and Commodore Wade with another very handsome photograph of his beautiful barque under sail, in appreciation, of the club's courtesies. The visitors were most impressed with the club's fine swimming pool and the splendid marine yard, with its railway, shop and electrical equipment.

Fantome II. is not a large deep water ship — not comparable to the 3,000 tonners — and she is not elaborately nor heavily rigged. Her eighteen sails are only half the number employed in some of the old clippers. These had royal and top gallant staysails, skysails, moon rakers, and two or three more jibs, and as many as 16 studdingsails, besides all the eighteen sails shown in the Fantome. It would be impossible for her crew to work her if she had more sails, for although they number thirty-two, only twelve men work above deck and twenty below —stewards, cooks, valets and engineers. Twelve seamen would be kept, on the hop, skip and jump hauling the yards around and trimming sail every time the Fantome tacked.

FANTOME II UNDER SAIL—Two views, the upper one from the picture with a gracious inscription presented to the Commodore of the Royal Canadian Yacht Club by Col. Guinness in commemoration of the visit. 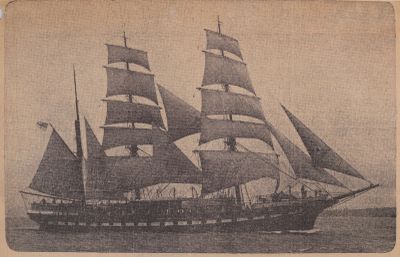