"Then spake the angel of the offshore wind,

He who bits the thunder while the bull-mouthed breakers flee -—"

IF he hadn't, this story of wreck and rescue would have been one of tragedy redoubled, instead of a tale of Big Tom and Little Tom, and the bridegroom who was drowned almost at his bride's doorstep.

There was so much similarity between the wreck of the Ann Maria at Kincardine, and the wreck of the Singapore recently recounted in Schooner Days, that some good friends have asked whether this was not one and the same occurrence, thirty-five years ago and the other in 1903.

The answer is no. The two vessels, somewhat alike in rig and tonnage, were wrecked in much the same circumstances, and in almost the same spot, on the same beach south of Kincardine piers. But their endings were a year apart, the one in 1902 and the other in 1903. Both were heroic.

The Ann Maria was an American vessel. She was larger than the Singapore for her registered dimensions were 131 feet 2 inches length, 26 feet 3 inches beam, 11 feet 3 inches depth of hold, and 256 gross tons. From photographs of her she seems to have been rather down at the heel before she came to grief. Her maintopmast head had been broken off at the eyes of the rigging, she had no jibtopsail, her sails were old and patched, and there were other little details which indicated what sailors call a "poorhouse ship." Of course, she may have been getting ready for a refit, when every vessel looks her worst. She was nearly forty years old, having been built in Conneaut, O., in 1864. She was registered in Milwaukee as No. 387.

The schooner was bound up Lake Huron with a cargo of coal from Toledo or some of the Lake Erie ports for the salt block at Kincardine. There was at one time quire a trade into that port with coal for the evaporators, and salt cargoes were exported by the wells then operating. This particular night - it was Oct. 7th, 1902 - a hard breeze was blowing from the west and northwest, and it was very dark. People on shore saw lights flashing and disappearing in the lake, between 8 and 9 o'clock. They did not know it, but this was the Ann Maria, in distress and burning flares for assistance.

Her captain, young Gordon, was engaged to be married to a girl in Kincardine. He was driving the Ann Maria hard, to get her in before the freshened gale headed him off and forced him to run back from the very lights of the harbor he sought. Truth to tell, he was listening more eagerly for wedding chimes than for the bell-buoy's lonesome tolling on the harbor bar. We were all young once.

Like the Singapore later, the Ann Maria had opened up under the hard driving, and the water was gaining on the pumps. It was the more serious in her case because, unlike the Singapore, she was laden with coal, not buoyant pine lumber. Her cargo would drag her down once the water had overcome the small reserve flotation of her twelve inches or so of freeboard.

The next thing the shore watchers heard cries for help on the night wind. It was so dark that they had not seen the Ann Maria stagger and miss the pier ends, as the Singapore was to do later. Unmanageable under the small amount of canvas she could show — the peak of the foresail and the flying jib — she came rolling in on the beach, struck heavily a few hundred yards from shore, and commenced to break up. Reinforced by some who had been to the fall fair at Tiverton, nine miles away, those on the beach began to build bonfires to guide the shipwrecked crew ashore if they could get off.

James Sinclair was the first to hear the cries. He ran to tell Capt. John McGaw. And though a ship is tossing in the jaws of death, let us delay a moment to record the genealogy of these McGaws of Kincardine. There were three patriarchs, Gabriel, Thomas and William, who came from Kirkmaiden in Wigtownshire, Scotland, in 1856. Gabriel pitched his tent in Richwood, Ont. Thomas and William came to Kincardine and became boatbuilders and fishermen of note, and the fathers of brave sailormen. The clan McGaw was rich in nicknames, Gabe, and Goose, and Wat and Fry and June were among the grandsons of the three patriarchs. Tom's grandson was "Big Tom" and William's was "Little Tom."

There was no lifeboat in Kincardine them, but "Big Tom" McGaw, who was to become coxswain of the government boat later, manned his uncle's fishboat, with his cousins Wat and John who was the June aforesaid, and so nicknamed to distinguish him from John and Jack among the cousinhood. With the three McGaws went Billy Ferguson, of Red Bay, near the Fishing Islands up the Bruce shore. He was working in Kincardine for the lumber company. Before they got their boat in the water wreckage was coming in on the beach, part of the doomed schooner's bulwarks. In fact it was the finding of this newly splintered planking in the backwash that showed them where to look for the vessel. Her lights were drowned out, and it was so black her bare spars made no tracery against the dark sky.

Pulling to windward through the breakers, the improvised lifeboat dodged the incoming wreckage in the darkness and after a hard row got under the lee of the laboring hull. She had canted around until her head pointed north. The crewwere huddled on the cabin-top, which was the highest point, but the seas were making such a breach over her that the cabin and the whole stern was coming off, plank by plank. It was impossible to come alongside without crushing the lifeboat, and Tom McGaw shouted to the crew to jump into the boat, one at a time, as she was tossed up on the seas. Three or four jumped. That was enough for one trip, but "Big Tom" saw that the schooner was breaking up, and tried to save them all.

A big bewildered woman, cook in the Ann Maria, stood with the young captain, poised on the shaking rail, waiting for the next lift of the rescuing boat.

"Oh I can't! I can't!" she cried, as the outstretched arms were hove up to her feet, then sank swiftly on the receding wave.

"You must, missus, you must,"shouted Capt. Gordon, seizing her in his arms. She struggled in terror as the boat rose again.

The captain threw her, shrieking, towards the rescuers. He jumped with her, in fact, but his footing was insecure, her struggles disturbed his balance, and they both fell short. The lifesavers grabbed for them and missed. Just at this, the most inopportune moment, a huge sea breached clean across the schooner, filling and capsizing the boat tossing alongside.

Captain Gordon, the cook, the crew, and the lifesavers were all struggling in the water together. Captain Gordon, the cook, one of the Ann Maria sailors and Billy Ferguson were drowned. They either sank, or were crushed between the boat and the schooner's side. The battered boat was swept away shorewards and tossed up on the beach, a wreck herself.

"Big Tom" McGaw, like many a good fisherman, could not swim. He was washed from one end of the schooner to the other but saved himself by clutching at the raffle of gear and hauling himself aboard. Here he found June and Wat, and three of the Ann Maria's sailors.

A Kincardine man, Robert Ross on the pier, heard the cries of the drowning in the water as they were swept shoreward. He ran down over the rocks, but when he reached the water's edge the cries ceased and he found nothing.

The doom of those left on board seemed sealed. The lost boat was one of the best surfboats on the east shore of Lake Huron, and she was gone. Even if she had not been wrecked it seemed impossible to again pull out through the surf, and the schooner had broken up so far that all her bulwarks aft of the main rigging were gone, the stern had washed away till nothing was left but the sternpost, and the masts were spreading and getting ready to fall.

Those on shore did not know what had happened until the battered boat rolled in with other wreckage. Then they ran around to old Capt. Spence's schooner Wanderer, which was lying in the harbor. They lowered her yawlboat from the stern-davits and carried it across to the beach. "Little Tom" McGaw, June's brother and "Big Tom's" cousin, Dan Matheson, Bob Saunders and Bob Green, a chum of Billy Ferguson's from Red Bay, got into her and pulled out through the breakers, shoved off by men wading shoulder deep in the surf.

But it was not so dark as it had been. On board the Ann Maria they could see, now, dark figures racing up and down the beach. Before there had only been the twinkling of lanterns. It was the grey of the slow dawn. And with the greying came a shift of wind, from northwest to northeast.

That was the change from death to life. The northeast wind, blowing offshore, began to beat the breakers down. Through their muzzled jaws came, lunging, dipping, dodging, but never beaten back, the Wanderer's yawl boat, small, and pulled by three brave men.

As the big seas turned from black to grey she got alongside. The drenched and exhausted survivors of the Ann Maria fell into her. A few minutes later they were landed on the beach among the coal and the corpses and the broken boards that were the Ann Maria's offering to the gods of the storm.

"LITTLE TOM" GOES TO THE RESCUE OF "BIG TOM"

THE "HORACE BADGER" LOADED NAME-BOARD IN, AT THE SALT BLOCK AT KINCARDINE 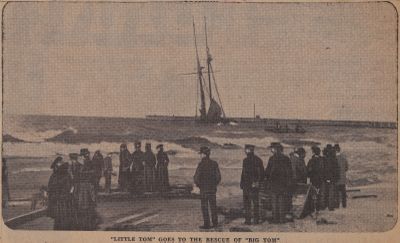