IT is a coincidence that for this week's Schooner Days the compiler had laid out a little tale entrusted to him by Capt. Nelson Palmateer of Picton, and Capt. Palmateer cast anchor in his last and happiest haven ere he could see this story in print.

Nelson Palmateer was as well known for his piety as for his long life afloat. Few, perhaps, realized the strong vein of sentiment in his character. His wife died many years ago. But Nelson Palmateer, although far advanced in years himself, and possessed of a good home with his daughter in Picton, kept open the pleasant home where he had dwelt with his wife in Cherry Valley a few miles west. It was furnished as it was when she was alive, kept as neat as a pin, and decorated with his models of the fast schooner Nellie P. Downey and the steam barge Iona, which he had commanded, and a model of one of the tall Prince Edward lighthouses which had often brought him home from Oswego. He lived in his lonely house, so well furnished but so empty, as much as possible each year, only coming in to his daughter's home in Picton for the winters. Then the snow made it bad for the doctor to get out to Cherry Valley when his aged heart bothered him.

Across the road, on the graveyard hill behind the church where he instituted the annual mariners' service since copied in other ports, he reared a granite monument to his life partner. Beside her name was a panel bearing his, carved in the stone, with the date of his birth and a blank left for the date of his death. Without using the text he manifestly had in mind "In death not divided."

Nelson Palmateer was born into the great schooner era on the lakes. His first recollection was the "barque" St. George of Toronto, wrecked on his father's farm at Point Traverse. Schooner days reached their acme about 1870 with a fine fleet of a thousand sail, and it was then, or a little later, that he blossomed as a lake sailor. This is his story of an early episode:

"My father owned the schooner Flying Scud in 1875, and my older brother, Albert, sailed her at that time. The Scud was built in Prince Edward County. She was a scow when my father had her. Later she was rebuilt with a straight stem and the usual ends of a small schooner, and was called the Flora of Picton. She was painted black and green then, and "Black Jack" Thomas sailed her. He lost her at Oakville in '94. When father had her, as the Flying Scud, she was painted green. She was about 75 feet long.

"Four thousand bushels was what the Scud carried, a fleabite compared with the 600,000 bushels a big steamship like the LeMoyne can haul, but a profitable freight for us in those early days. Yes, even if we had to go all the way up Lake Erie to earn it, and work through the Welland Canal twice on each voyage.

"In the spring of 1875 Albert took the Scud to Lake Erie ports to load wheat for Oswego on Lake Ontario, and I went with him. We had to go from one port to another picking up a few hundred or a thousand bushels at a time, at little spindly wharves where the farmers teamed the grain down and dumped it in the hold, or ferried it out to us in scows.

"We made several trips, and then in June, while we were unloading at the elevator in Oswego, we got a message from my father, who was working the farm at home at Point Traverse, in Prince Edward, that he needed me to help him, and I was to come as soon as possible.

"Oswego swarmed with Prince Edward vessels in those days, and by good luck the little schooner John Wesley was there, loaded with coal for South Bay, which is just inside Point Traverse. There were two John Wesleys, both small. This was a little round-bilged scow owned by Capt. Billy Lobb and sailed by him and Frank McCauley. She was sawed off at the ends and looked like half of a barrel that had been split in two down the staves. In fact she was nicknamed the Punchy, from her resemblance to a puncheon. She was a strong little horse, very heavily framed, and could sail well in smooth water. She was useful in carrying all sorts of cargoes into spots like South Bay, where the water is shoal. Eventually, like the Flora, she became a stonehooker out of Frenchman's Bay, and was wrecked on the south shore, near Jordan.

"Capt. Lobb, a good neighbor, was quite willing to give me a passage home, and took me aboard in the early morning. We started out with a light south wind, raining and foggy. After a few hours we heard a steamer blowing. She was almost on top of us before she became visible. We heard her bells ring for to go astern, and when her propeller stopped a man in the wheelhouse hailed: 'Where in tarnation are we?'

"'Ten miles sou' by east!' the man repeated, and then the fog shut her out as we dribbled along with the light wind.

"Before we got much further it freshened and then blew a screamer right down the lake. We tried to hold her up to it for Point Traverse, but the seas went over her, first in sheets and then in solid masses, as though she was a submerged dock. She was very heavy with fifty tons of coal.

"We took in the fore gafftopsail, and the old men asked me if I could get aloft to stow it. I was young and active, and I made nothing of trying it up. Then we took in the main gafftopsail, and I tied that up for them, but still the Punchy had more sail than she could lug. So we downhauled the jibtopsail, and I went out on the end of the horn to strap that down with its gaskets. I was up to my neck in water at times.

"Harder still it blew, and while Capt. Lobb kept her jilling, Frank McCauley and I reefed the mainsail. That left her under easier sail. We fetched in away to leeward of Point Traverse, but just able to weather the Main Duck, twelve miles farther down the lake. We hoped, as we were drawing in on the land, with Prince Edward county to windward of us, it might ease up, and we would be able to beat up for South Bay, but it blew harder than ever and the sea went smoking over her. So we had to give the John Wesley sheet and let her run down before the sea and wind to the Bateau Channel for shelter.

"We were all tired out, wet and hungry, for there was not a dry inch in the John Wesley, and we had not been able to do any cooking. That night the wind swung through the west to the north, and next morning — it was a Sunday — we hove up our anchors and steered for South Bay with a started sheet. When we came abreast of Point Traverse we hove to, and father pulled out in a small boat and took me ashore home safe."

"THE PUNCHY," IN WHICH NELSON PALMATEER CAME HOME

AND HERE is Capt. Palmateer's last letter to Schooner Days—and the fulfilment of his last request. The Picton Times and Picton Gazette will doubtless comply. "I am tired," he wrote .... "there may not be another mariners' service at Cherry Valley." The one there on Thursday, over his body, worn with the lake and the years, was the last for him; but a great institution which he founded will continue. 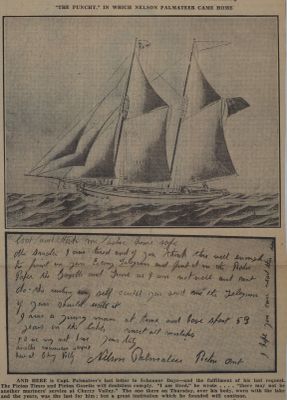