ONCE there was a ship called the Wanderer of Liverpool, sailing the seven seas, a fine tall four-masted barque of 3,000 tons, with skysail yards and sides of steel. Her beauty and her reputation for a tigress' taste for blood captivated the imagination of Jonn Masefieid, poor, wistful, fresh from the sea. He wrote poetry about her. Later, laureated, he wrote prose.

In Barbados once I saw another Wanderer, a three-masted whaling barque from New Bedford, black and bluff. She was the last of New England's whale chasers, and came to grief seven or eight years ago when setting out on a voyage.

We had Wanderers on the lakes, too, as unimportant in comparison with the tragic skysail queen or the far-faring whaleman as is the gatherer of these trifles in contrast with mighty Masefield or leviathan. Yet the history of our lake Wanderers is curious. Even of those who knew them well, few knew all of it.

This is due in part to the confusion which arises from the same name being borne by several ships. There was the Wanderer of Toronto, built in Oakville in 1866, just before the White Oak, and after the Sea Gull, which sailed to South Africa. She was 80 feet long, 20 feet 4 inches beam and 7 feet 6 inches depth of hold. George Wright, of Port Hope, master mariner, was her registered owner by the time the first Dominion register was compiled, in 1873.

She was sometime commanded by that rugged king of the cordwood trade, "Old Dolph" Corson, who prided himself on never wearing any boots but seaboots, and seldom those. He was a smart sailorman, and would run barefoot over the splintered, barky, sharp-edged surface of a deckload of cordwood as nimbly as a squirrel. His sons, Dolph and William and John, were smart sailormen too, but more conventional, and commanded larger vessels than their rugged sire. "Young Dolph," no longer young, was drowned with his last ship, the three-master Sir C. T. Van Straubenzee of St. Catharines, when a steamer cut her down in Lake Erie in 1907.

This Lake Ontario Wanderer was in Weller's Bay with both anchors down that night of Nov. 6th, 1880, when the great gale smote sixteen schooners on Lake Ontario, all in sight at dark, and scattered them to the four corners of Davy Jones' locker. When the Belle Sheridan struck the beach at Weller's Bay, dragging her anchors across her stem all the way from Presqu'isle Point, young Dolph Corson or Old Dolph, or both, jumped into the Wanderer's wood scow and tried to scull out to the rescue of Capt. James McSherry and his sons. But they never got across the Bay, and the McSherry boys drowned with their father, one by one. Only young Jim came from that wreck alive, out of a ship's company of seven. It was the Lake Huron Wanderer's yawlboat that served as a makeshift lifeboat for Little Tom McGaw's rescue of Big Tom McGaw and the remnants of the crew of the Ann Maria in her wreck at Kincardine, recently recounted.

There was also the Wanderer of Sodus, in New York State on Lake Ontario, built there by H. Doviel in 1861, the first year of the American War. She measured 84 tons, which would make her a little smaller, possibly, than the Oakville schooner, although the measurement system in vogue in Canada and the States that long ago makes comparison confusing. This Wanderer hailed from Vermillion, Ohio, in 1864, and was then owned by E. Felton. Perhaps she was the vessel referred to in a humble water-front item in a western paper, Sept. 19th, 1900: "The small schooner Wanderer, Capt. Dan Seavey, brought 300 baskets of peaches into Sturgeon Bay," on Lake Michigan, "but went on to Menominee." One likes to think of her ending her days, forty years after her launching, as a fragrant fruit carrier.

From George E. Currie, of Highland Park, Mich., comes this account of one of the last wanderings of the Lake Huron Wanderer — a voyage which began as a happy pleasure excursion for an ancient mariner, and ended with a bruised and bereaved old man bringing the schooner into a foreign port alone. Mr. Currie was an old friend of the Spence family, pioneers of Saugeen, or Southampton, as it became. Old Capt. John Spence founded the place as a fishing station, and he and his sons Harry, Jack, William and Alexander owned and sailed several schooners. Mr. Currie wrote his friend, Mr, Albert Leeder, of Toronto recently.

"Ten years after Capt. John Spence had given up sailing, his son, Capt. A. P. Spence, known as 'Cappy' from childhood, continued to sail the little Wanderer.

"He was bringing her down Lake Huron with a load of paving block cedar in 1895, and Capt. John Spence made the trip with him to visit us here in Detroit. The schooner's crew consisted of one good sailor, John Body, who was mate, and two inexperienced men.

"When about forty miles off Harbor Beach, Mich., it became necessary to reef the mainsail. Capt. A. P. Spence and Jack Body, being the ones who knew best how to do this, climbed into the yawlboat, which was hanging on the stern davits, so as to haul the earing aft along the mainboom, after squatting the mainsail down. The strap on one of the davit fall blocks parted with their weight, and the jerk of the vessel in the sea running, dropping one end of the yawl down and spilling both men into the water with the sudden jolt. In the confusion one of the inexperienced men let go the second davit fall and the yawl broke adrift from the vessel, with the captain and mate clinging to it.

"Capt. John Spence was in the cabin when this occurred. Hearing the shouts he rushed out, and, taking in the situation at a glance, ran forward over the deckload of cedar to let the anchor go. He knew that the Wanderer, having lost way would drift to leeward faster tha the lost boat, so by holding her with the anchor he hoped to keep her to windward and control her so as to pick them up. But in his haste he fell from the forward end of the deckload on to the hawser bitts, striking his head with such force that he was knocked unconscious.

"When he came to, his son and the mate, exhausted with clinging to the capsized yawlboat in the big sea, had relaxed their grip and sank.

"Old Capt. Spence got the Wanderer under way again and sailed her into Harbor Beach as night came on. He was practically single-handed, for the two men with him were green and frightened, but Capt. Plough, of the life-saving station, said he never saw a vessel handled better. The first we knew of the trouble was the next morning, when I saw an account of it in the Detroit Free Press. I notified the family at Southampton by wire and took the first train to Harbor Beach, an brought Capt. John Spence and the vessel to Detroit. Here we wer met by Capt. H. J. Spence, who took charge. At this time I was building the Detroit Railway and paving streets. A great deal of cedar block was then used. I had quit sailing in 1888, seven years before." 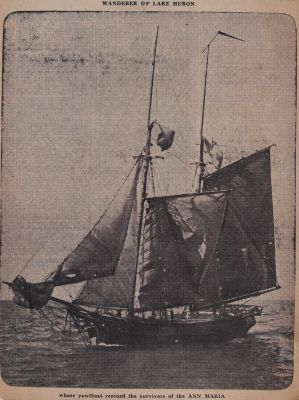