THAT picture of the unidentified barquentine loading lumber in Parry Sound sixty years ago, which our good friend Capt. Jas. McCannel submitted a little while ago, has many old timers pulling their whiskers and overhauling the lockers of memory. Here is one of the Fellowcraft, which is mentioned as a probable solution.

The picture of the Fellowcraft was drawn for The Telegram six years ago by Joseph F. McGinnis, of Brooklyn, who sailed in her in 1881. It is a fine spirited picture and corresponds closely to the Parry Sound photograph if allowance is made for the probability that the absence of the mizzen topmast and the snubby jibboom were temporary reductions in the rig of the vessel shown. The Fellowcraft was built in Port Burwell in 1873 for D. M. Foster. She was one of the smaller barquentines, being 116 feet on deck, 23 feet 6 inches beam, 9 feet 8 inches depth of hold, and registered 237 tons.

One of those interested in the identification is Mr. Alan H. Ross, of Owen Sound, who has favored us with two letters, both of which are good enough to quote. In his last he says:

"I wrote you on Dec. 25 and am here again. Have just been reading your department in The Telegram.

"I have seen both the Fellowcraft and the Lady MacDonald. Cannot remember the exact year but it was sometime between 1881 and 1884 They were lying at Leith, mentioned in my last, both in for a load of wheat. Unfortunately I never saw either one under canvas, but I do remember that they were both three masters. The Fellowcraft was lying at the dock with lines out and the Lady MacDonald was anchored about 500 yards offshore. I have been told that James Sutherland, grain buyer of Owen Sound, was owner of the Lady MacDonald and am under the impression that he also owned the Fellowcraft. James Sutherland was perhaps Owen Sound's wealthiest citizen at that time but he lost practically everything in unfortunate grain and shipping deals.

"I remember seeing the Phoebe Catherine beating up Owen Sound bay on several occasions. Tradition had it she was cranky and hard to steer. According to Harry Tucker, mentioned in my last, she was given the 'unofficial' name of 'the Lawyer's Joy,' having been the bone of contention in several law suits."

Reference to the "Lawyers' Joy" may explain a curious item we had in Schooner Days some time ago, about a photograph of the Phoebe Catharine on the Owen Sound waterfront. This showed a nickname or pseudonym painted on her bow is irregular letters "SARY JANE." Perhaps this was evidence of an effort to escape from some legal entanglement. The Phoebe Catharine was a Prince Edward County vessel and went to Georgian Bay after ten years of trading on Lake Ontario. She was haunted by more than lawyers, according to waterfront tradition, but nobody believes in ghosts any more.

Mr. Ross' Christmas letter was prompted by the "protest" of the schooner Otonabee, which has called forth a deal of correspondence. He said:

"I have been deeply interested in your account in yesterday's Telegram of the Otonabee's successful riding out of the storm on Georgian Bay, 6th and 7th of November, 1880. May I say here that your department or column, if that be the proper word, is always absorbed with much pleasure here in Owen Sound by a wide circle of readers. Many of us are familiar, or at least have had an acquaintance more or less with some of the vessels dealt with in your weekly articles.

"I am 63 years old, so I can remember events that happened in 1880, although the remembrance is rather vague. The tug "Mary Ann" is mentioned in yesterday's column, she being the tug that hauled the Otonabee into port after the blow referred to in the foregoing. I remember the Mary Ann quite well and it will only take a few minutes to tell why and how I remember her.

"In the spring of the same year, 1880, the schooner Restless docked at Leith to load wheat. Leith, let it be explained, is 5 1/2 miles northeast of Owen Sound. At that time the dock there was in good repair and a considerable amount of grain, mostly wheat, was shipped over it every year. Ross Brothers, uncles of mine, were the grain buyers and shippers. The Restless called on her first trip of the season and had about 900 bushels of wheat loaded when a gale from the north sprang up and she parted her dock lines. She was driven over on the sand beach southeast of the dock and lay there about three weeks. A tug, the name of which I never have heard mentioned, tried to pull her off and failed. The Mary Ann was brought up from Collingwood and put on the job. Her hawser was attached to the capstan of the Restless, but at the first pull the capstan was torn out bodily. Then a cable was passed around the entire hull of the schooner, and the Mary Ann brought her off without-: any trouble.

"Leith was only a small village then, although considerably more populous than it is now, so the incident made quite a stir there. I was attending the public school at the time and we scholars were all taken down to the beach by the school teacher to see the Restless floated. I was six years old at the time, so the whole thing left an impression on me that has never been effaced.

"Now I wonder if you could unearth some data on this said schooner, the Restless, and, should you be able to do so, could you not possibly use her for a theme in some future issue of a Saturday's Telegram? The late Harry Tucker, barrister of Owen Sound, was, until his death a few years ago, in 1929, I think, our authority here in all such matters, and he professed to know all about the Restless. Much of what he told us was authentic, but again much of it may have been imagination.

"I saw her often, both before and after her going ashore at Leith, for she was running between lake ports here, picking up a cargo wherever it offered. But I have never heard where she went to from here, or what her end was. According to Harry Tucker she was built shortly after the Civil War, so she must have been between 10 and 15 years old when I first saw her. I never remember seeing a photo of her either.

Mr. Ross' contribution about the Restless is an appreciated addition to what Schooner Days has already published about her. Some day soon we shall repeat what has gone before and attempt a complete story on this curious little vessel.

Tug MARYANN of Dunnville, built at Stromness, 1867, for Senator McCallum, and first vessel entered on the Dominion Register of Shipping. It was she who brought the Otonabee into port. Dominion registrations now run into the hundred thousands.

The PHOEBE CATHARINE, "Lawyers' Joy," is the ghostlike vessel in this picture of the Owen Sound waterfront. 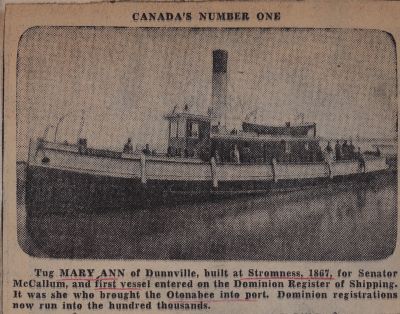