IN CHERRY VALLEY last Sunday, at the annual Mariners' Service, they were talking about one of the early products of South Bay shipbuilding, the Goldhunter.

One of the schooner names that has ever fascinated this compiler is that just mentioned.

Particularly the Goldhunter of Prince Edward, for there was also a Gold Hunter of Chicago. This last was big and old and burly, built in 1856 in Cleveland and carrying 18,000-bushel loads of grain into Collingwood in the 70's. Doubtless a three-master from her tonnage, 386 American register. Quayle and Martin were her builders, in Cleveland, and Wm. Mather her owner, in Chicago, and what became of her is unknown.

But we do know what became of the Goldhunter of South Bay, or of Picton, as she later hailed, and that is thanks to a letter from Lion's Head which came this week, seventy-five years after our Prince Edward County Goldhunter was born. It is pleasant and curious that this information should come now by chance when we have been waiting for years to piece together the Gold Hunter's history.

She was built near the mouth of Black Creek at the head of South Bay, in Prince Edward County, by David Tait, next to his famous son, Jack, the county's best known builder, in 1862. Capt. Wm. Dulmage laid her keel and set up some frames for her in the fall of 1861. In the following spring he sold her to Capt. Cummings Hume, who took as partners William Ellis and Jacob Jackson. They then engaged David Tait to finish her, and that summer she was launched in style. Long afterwards, Dr. Andrew Rose, schoolmaster of the Jacob Jackson School, near Milford, told how the first orange he ever saw or tasted was one from the crate the owners provided to celebrate the launching.

Next year, in 1863, Jacob Jackson bought the Goldhunter outright, and Capt. Ellis and Pat McMahon had the Hibernia built on the ways from which the Goldhunter was launched.

If there was an Orange aroma about the Goldhunter, there was none about the Hibernia, as may be suspected from the name of Capt. McMahon. She was painted a brilliant green. Someone scrawled on the gate of the building yard on the morning of the launch:

David Tait, a gentleman and a scholar and a good judge of toleration, took his builders' chalk and inscribed below

"Who wrote these lines

'Tis so upon the gates of hell"

And so a possible religious riot passed off in laughter.

For Mr. Jackson the Goldhunter was not a lucky schooner, for he told his old friend, S. A. Clarke, of Toronto, long afterwards, that he lost a fortune with her when she was burned. Just when this episode took place has not been learned. It certainly did not terminate the Goldhunter's career, for she was going strong twenty-seven years after Mr. Jackson became her sole owner, and she ended her days by water, not by fire.

It has always seemed appropriate that the Goldhunter should have been painted black, with a smart orange stripe along her coveringboard and on the beading of her bulwarks, and that the balls above her topmast trucks should have been gilded and shining. But that is not the picture the old-timers give of her. They remember her as white with green stripes on rail and coveringboard, and a red beading along her bulwarks, and painted green on the bottom, and sometimes lead color; a clipper bow, neatly turned quarters, and good model. Apparently the only golden note in her costume was the crate of oranges at her launching and the dividends she paid when she got going. She was 114 feet long, 26-foot beam, and 10 feet deep in the hold. She registered 219 tons, and could carry 13,000 bushels of grain. She was a smart sailer.

Young Capt. John D. Vanalstine had her in 1865, when he was only twenty-two. She was his first command, and he did well with her in the barley trade, between the Bay of Quinte and Oswego. Later she did well in the long haul from Chicago to Collingwood and from Chicago to Kingston.

Her building place was close to the village of Milford, and while she was long known as the Goldhunter of South Bay. Milford was her port of registry from the first. Later it was Picton, and still later it may have been Goderich, for she was owned there at the last.

Like so many of the Prince Edward schooners she gravitated to-wards western ownership, attracted by the lumber trade. James H. Hickman, of Toronto, owned her in the 1870's. In 1871 Capt. Robert Shanks was sailing her. In the fall of that year she loaded 2,200 bushels of oats, 32 tons of hay and two barrels of black oil in Windsor for Collins Inlet—apparently lumber camp supplies—and when she unloaded this cargo in the Georgian Bay she was lightly freighted with 165,000 feet of lumber at Staples and Sintern's mill, and sailed again for Windsor on Friday, Nov. 3rd.

Unlucky voyage! In a gale of wind and snow she ran into Smith's Bay, under Cape Smith for shelter. When it lulled and she was getting under weigh again she struck upon an uncharted shoal (chances are ten to one, of this coming out "unchartered," but we have good proof-readers). At the very spot where she was gripped by the rocks, the Bayfield survey, made to 1817, showed nine fathoms of water, 54 feet! The time of the year was against her. Unable to get her off, and expecting her to break up, Capt. Shanks caught the old Chicora at Killarney and came down to Collingwood to enter the insurance protest and see what could be done about salvage.

What he found you shall hear next week.

Sir,—I have always been interested in boats and enjoy "Schooner Days." Your article on the Calvin timber business of long ago is very interesting. I was born on south shore of Bay Quinte, near Thompson Point, and can go back a little farther to the "King William," a long low black boat with the big high paddle wheels of those days towing these big rafts of timber down through the Bay to Garden Island, where they were remodeled for passage down river to Montreal and loaded into sailing ships for the Old Country. Mostly on all oak, I think, and barely floating, carrying the French families from winter lumber camps, horses, wagons and whole outfits usually in sight all day long as the rafts were very deep in the water and required a powerful boat to tow them.

I believe sticks of this timber have been grappled up from the bottom in recent years and are perfectly sound.

Our Camp "Watercombe" in "Long Beach" of Bay Quinte, provides the last homes of yachts Katy Gray and Temeraire.

Would Mr. Bartlett's "King William" be the very ancient steamer William IV., coeval with the monarch whose name she bore? Her remains are sunk at Garden Island, and some day we may have a story about them.

RECALLING EARLIEST SCHOONERS ON THE LAKES

CHARLIE BOWIE of Midland, expert cabinet maker, has made these articles for Capt. Jas. McCannel, of Port McNicoll, from the timbers of veterans of the War of 1812. The vase and candlesticks are of white oak from the captured U.S. Schooner Tigress, whose bones are bleaching in Penetanguishene Park. The gavel is also white oak, from H.M.S. Nancy, sunk at Nottawasaga in 1814 and recovered in 1927. The relics will be a feature of the decorations for the Mariners Service in Port McNicoll Sunday evening, before the sailors join their steamers for the season. 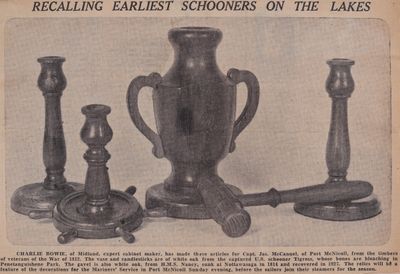