WE left our gallant Goldhunter hard and fast on a rock in Smith's Bay, under Cape Smith, in Manitoulin Island, in the first week of November, 1871, with water coming in and her captain, Robert Shanks, catching the Chicora at Killarney to arrange for salvagers. Things looked so bad that she was abandoned to the underwaters—and they expected her to be a 100 per cent loss.

Sylvester Bros., of Toronto, long wharfingers and shipowners at the foot of Church street, took a chance and bought the ship and cargo as she lay on the rocks. Fickle fortune smiled on them with an open fall, and they got the lumber out of her, formed it into a raft, and moored it in a small harbor nearby which fish boats used. Then they pumped her out and floated her off and reloaded the lumber into her and sailed her on down to Sarnia.

Capt. James Jackman had command of her, possibly in partnership with the Sylvesters as owners, and sailed her for some time. There was some episode in which the Goldhunter was towed off a lee shore by the Royal Naval gunboat Prince Alfred from a position of great peril. This may be something of which we have not yet learned the details, but the picture commemorating it has long been in the Sylvester family. Perhaps it represents how the little ship was freed from the rocks of Cape Smith. The Prince Alfred was one of the gunboats that came out for the Fenian Raid, and after it was over she was stationed on Lake Huron for a time.

Capt. Jackman was in command of the Goldhunter in 1883, and Capt. John Williams went with him as mate in the fall of the latter year, after he had laid up his own schooner, the P. E. Young. They loaded lumber here and took it to Oswego and loaded coal there; had to go into Oak Orchard for shelter, and just got back to Toronto before the Bay froze up. She was a smart schooner, but leaking badly this trip, Capt. Williams says.

After that the Goldhunter was bought and sailed by Capt. Alex McLeod, of Goderich.

"I sailed with him in her in 1890," wrote Capt. John Tigert, of Lion's Head, recently. "That was the year the steamer Alderson sank the tug, Annie Watt, her opposition boat, off Barrier Island, on her way to Lion's Head with merchandise for the merchants here.

"Our first trip in the Goldhunter was from Dyer's Bay in August, loaded with cedar posts for Detroit. Then he got her into the lumbar trade, from Lion's Head to Walkerville. She could carry 230,000 feet.

"The lumber was of hemlock. A trip a week soon finished the lumber, and he went back to the cedar trade, for Detroit was then being block-paved.

"We towed from Tobermory to Baptist Harbor with the tug James Laiten, a small high pressure tug with a square stern and not much power — mostly sparks from the wood fire.

"We got anchored in Baptist Harbor and filled the hold with cedar posts belonging to Capt. Jas. Leighton of Kincardine. Some time the next day the Berbena May, a small tug owned by T. A. Currie, of Golden Valley, gave us a tow out. We sailed all night with just a light air. The following morning we were off Round Island with a light air and considerable current. Capt. McLeod was in the fore rigging watching her, and sang out to put the wheel down hard and let her come round, to tack away from the island. But the wind was so light she would do nothing, and she just drifted on to the island. We got out anchors but the bottom is all flat rocks with big cracks in it, and he anchors would not hold, either to keep us from drifting further on, or to heave us off.

"We had been on the rocks an hour when the wind came down from the northwest pretty fresh. We lowered all the sails but the foresail, and kept that on her to keep her from pounding. We were on board of her till mid-afternoon, when Capt. Robert Golden came to our rescue with the fishboat Ray, and took us off and landed us in Golden Valley. It was the right place for Goldhunters, perhaps, but we didn't think so at the time.

"Next day Capt, and Mrs. McLeod—she was the cook, and like a mother to us all—drove to Wiarton to get the money to pay us off. I had $27 coming to me. They were back next day, and as the wind had lulled we began to strip the vessel. When we came up on the triatic stay between the two mastheads the foremast went by the board. There was about two inches of sound wood1 on the outer side of the mast, and all the rest was charcoal rot.

"The next storm broke her all to pieces, and part of her floated into Little Pike Bay. Capt. John Rutherford, with the schooner Wanderer, belonging to Spence brothers, had seen us drift on the island while he was loading peeled pavement cedar for Detroit farther along the bay shore."

So ends the cycle of the Goldhunter, from the crate of oranges at the mouth of Black Creek in Prince Edward County in 1862 to campfire wood in Little Pike Bay in 1890.

THE GOLDHUNTER BEING TOWED FROM A LEE SHORE IN Georgian Bay BY H.M. GUNBOAT PRINCE ALFRED. 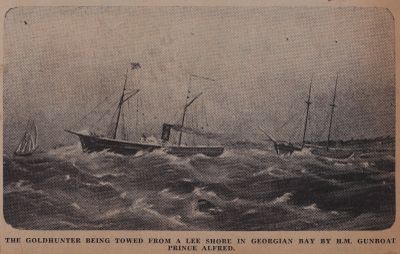