WELL, it wasn't the Ariel, of Port Hope, whose picture we depicted was too small for that Ariel, and a Port Hope master mariner confirms the diagnosis. His suggestion that it might be the Snow Bird, of Toronto, is sound as far as size goes, but the bow of the possible or impossible Ariel would not fit the Snow Bird, as we remember — and we remember her well — and so far as we know, she never had a raffee on the foremast, or was trading into Kincardine. At least she had not, and was not between 1890 and 1900, when the picture was taken. So, apart from the general resemblance, the Snow Bird identification is out, and we go back to our own second thought, that the vessel depicted may have been the Nemesis, of Southampton.

Information about the Ariel of Port Hope came promptly in an interesting letter worth giving as is. It was from Capt. R. H. Edmunds, police magistrate and one-time Mayor of Port Hope. This is it:—

"Please pardon me for using a pencil, but I can do better with it than a pen. I am an old lake captain, in my 80th year, so don't be severe on me for spelling and grammar. I had very little schooling, as I started sailing on what you call a windjammer when twelve years of age, and by the time I was twenty-one I was master of the schooner Mary Ann Lydon. That was in 1880, and I have been in charge of a good many vessels from that time on, so you can see I had little time for books until it was too late to go in for a literary career.

"I take The Telegram, and am much interested in your Schooner Days. I must say you have the names of the different sails and ropes, and gear down pat, and I pride myself on knowing the game pretty well. My first two years was working in a brigantine, the Atlantic."

(Yes, captain, we know her; black and red, clipper-bowed, with a figurehead of a cornucopia of fruitss and flowers, and sailed by Capt. Sol Sylvester and his brother David in their youth. Excuse the interruption.)

"I notice you often speak of Capt. Johnny Williams, whom I knew very well. In fact, I sailed one of his vessels, the Speedwell. Should you see him, remember me to him.

"What I started to tell you was about your last Saturday, April 23rd. issue, about the schooner Ariel. The photograph shown was certainly not the Ariel of Port Home. As a boy I sailed in that one with Capt. Joseph Philp, Sr., who brought her out. The Ariel of Port Hope was a handsome model, and, something like the Singapore, was not a good sailer. Though both had fine lines, for some reason they were not speedy.

"As you said in The Telegram, the photo in last Saturday's issue was a much smaller vessel than the Port Hope Ariel. To prove that she was smaller, you will notice that she has only two peak halliard blocks on her gaffs. All fair-sized vessels had three blocks on their gaffs, because two blocks meant less hauling, but much harder work for the crew. The vessel in the cut looks somewhat like the old Snow Bird, sailed by Capt. Andy Baird and his son of the same name after him.

"I don't know if you knew that the Port Hope Ariel was built of tamarac, and was wooden fastened, or treenail fastened, as were the other vessels which came up from Quebec the same time as the Ariel. Their names were the Aurora—the Maria Annette — the Ontonabee, Magdala, and Cavalier. They all came to Port Hope, and were owned there, and sailed from there for a number of years.

"I was master of the Aurora for several seasons, and was in her when the steamer Belle Wilson, which was towing her, was lost in Lake Huron. The Aurora had been sold to Laughton Bros., lumber dealers, who had a mill at Blind River, from which we carried lumber to Toledo and Detroit. The Belle Wilson was owned by the same firm. We both loaded coal in Toledo for Algoma Mills, and when crossing Lake Huron the Bell Wilson foundered, but the Aurora came through safely. Some time I will tell you the story, if you like.

"This wooden fastening was done because they would not use iron bolts on salt water, for fear of them being eaten away by rust and letting go. When they built these vessels I have mentioned down in Quebec they did not change the method of fastening, even though they were going to fresh water. After the treenails—called 'trunnels,' were driven in they were caulked in this manner. A triangular slit was made in each end of the wooden pin, and then oakum was caulked into the slit, spreading the ends so that the trunnel could not work out. After years of service, when repairs had to be made to these vessels, bolts were used in the place of the treenails.

"The last vessel I sailed was the E. H. Rutherford, owned then by Elias Rogers & Co. I retired from sailing November, 1896."

And well we remember the E. H. Rutherford, captain, both at that time and later. We were first in company with her in the Albacore, in 1891, going down the lake. The Rutherford went into Charlotte, and we went on to Fair Haven. It was a beautiful Sunday, and the two vessels were side by side most of the day. The Rutherford, which was painted white and lead color when this picture was made, was then painted black and green, with green rail and coveringboard, and her stern, which was diagonally planked, was yellow. Are we right?

From a Toronto lady, Mrs. J. A. Nichols, 2458 Danforth Avenue, comes pleasing additional information about the Ariel. "I was interested by your references to the Port Hope Ariel last Saturday," said Mrs. Nichols. "I have in my possession the model from which the Ariel was built in 1867. I always understood that my grandfather, the late Capt. Joseph Philp, Sr., of Port Hope, was owner or part owner and the first skipper of the schooner, and it was he who brought her from down east to Lake Ontario. About the only sailor left in Port Hope who might be able to give you information about the Ariel would, perhaps, be Captain Richard Edmunds, former mayor of the town."

"Here is a little information regarding the Schooner Ariel, copied from an old cargo book dated June tenth, eighteen-seventy.

"Cargoes on different voyages consisted of:

Cases of boots and shoes.

Mrs. Nichols' maiden name was Marjorie Philp. She possesses her grandfather's master's parchment, given under the seal of the Minister of Marine and Fisheries of Canada at Ottawa, March 21st, 1884, when such certificates were first authorized. Capt. Philp's is numbered 550. He was a Cornishman, born at St. Tudy, Cornwall, Sept. 7th, 1830, and he passed his examination at Port Hope, Feb. 22nd, 1884. He had then been in command of several vessels before certificates were required. The ancient parchment is still in its metal watertight container, as was the practice of the ancient mariners.

Mrs. Nichols' builder's model of the ARIEL of Port Hope, and a Gibbons picture of the E. H. RUTHERFORD, Capt. Edmunds' last command. The Rutherford was not one of the wooden-fastened tamarac-built vessels. 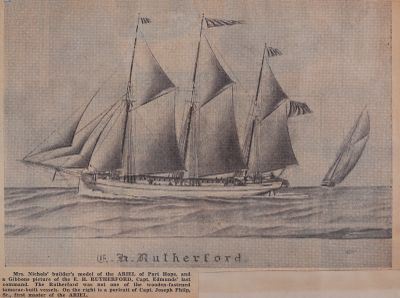