"THERE was Con Shay, too," contributed Capt. McCannel, as he and his friend Capt. H. M. Boyce of Milwaukee were going over the honor roll of 60 years ago. "There was more than one that went by that good Irish name, but the laddibuck I have in mind belonged to the pot gang that used to hibernate in the jungles on the outskirts of Ashtabula, when he was not on the beaten trail between Toledo and Buffalo.

"At times that was a moneymaker, let me tell you, in Schooner Days. When my brother-in-law was in the Antelope late one fall—about 1872 it would be—they got 17 cents a bushel for the wheat they brought down Lake Erie. The Antelope could carry over 22,000 bushels. The one trip grossed nearly $4,000 freight. The men before the mast got $5 a day.

"All the policemen between Hades and Bermuda had this Con's number, and not for his angelic works by any means. In his way he was a good man in a vessel. He was big, rawboned and powerful, with the widest mouth I ever saw on a human being. Whether he was born with that hatchway or got a re-build from drinking out of cans and pots in the jungles, I don't know, out it was a sight to be remembered, and the voice that came out of it was in proportion.

"One time when I was with Capt. Holmes in a steamer we had one schooner in tow and were to stop at Detour and pick up another vessel, I think it was the Sandusky we were towing. At any rate, the redoubtable Con was mate of her. Going into Detour that Sunday morning, and a grey November morn it was, we let their towline go, and went on to the dock ourselves. Capt. Holmes seldom gave the men on the vessels much warning as to his intentions, and this time he just checked, blew for the schooner to shorten towline, and signaled to us aft at the towing bitts to cast off.

"They were getting ready as fast as they could on the Sandusky, with a thousand feet of big wet line out, and while they were heaving it in with a messenger the bight of the line got foul on the bottom and the vessel, of course, had to come to a standstill or lose it altogether. At last they put out the yawl boat and commenced working along the wet line to free it. The gang was pulling on the line, when suddenly it came clear and Con went over backwards over the yawl's gunwale into the icy water. When he came up you could hear that big mouth of his clear to the custom's house, and he was not asking a blessing either. Aboard the steamer we rushed out to see what had happened, and manned our lifeboat, but his own crew hauled him out before we dropped it into the water. I'll confess I heard adjectives I never heard before or since.

"I can see him yet, dripping wet when they pulled alongside of us, late in the same afternoon, for Con had not changed a stitch, for the very good reason that his entire wardrobe was always on his back. He always wore a blue flannel shirt, overalls, cowhide boots and no socks. That's what he took his involuntary bath in, and that's what he was wearing when they came alongside, hours later. Capt. Holmes discreetly kept out of sight, for Con was as savage as a bear without breakfast. He was more like a gorilla, with thick fingers all of the same length, every knuckle out of joint. No policeman would tackle him single-handed. Indeed, that very day our mate told us of the policeman who caught him red-handed so to speak, roasting a chicken he had stolen, over a fire he had made in someone else's shack.

"'What are ye doing there now?' asked the policeman, less anxious for an answer than an exit.

"The policeman looked at the big red-knuckled hands like hams and used that discretion which is valor's better part. He gingerly accepted a half-burnt drumstick, declared it a juicy morsel, said how sorry he was that he had to be moving to meet the sergeant, and departed, glad to be all in one piece."

"Yes," continued Capt. Boyce, "Con used to hang out in Ashtabula a good deal. When the frost was on the pumpkin and the corn was in the shock he and his pals used to hit the trail for Mobile, Alabama. You know the old chanty:

'O, was you ever in Mobile Bay?

Lowlands, away my john,

A-screwing cotton by the day?

My dollar and a half a day.'

"They were supposed to get winter jobs loading cotton into the big ocean-going ships, but as near as I could find out, Con never work harder at cotton-screwing than singing the song. Anyway, in the spring as soon as the weather was sure to be warm up here, Con would reappear, having hit the trail north with the birds.

Con and a pal named Reilly had a shack in the woods outside of Ashtabula, furnished with a few empty cans and a frying pan, and what with corn, tomatoes, cucumbers and an occasional chicken from some farmyard, they lived a life up to Reilly's name. They made an occasional trip on the lakes, when they got tired of their own cooking, but not many, and the frosts always started them south again.

"One spring Con and his side-partner came up from Mobile and on the way they caught a careless woodpecker. As it was too small for a meal for two, they made a little willow cage for it and brought it along. Right on the outskirts of Ashtabula they stopped at a woman's house to panhandle the breakfast for which the woodpecker seemed insufficient. The woman listened to their cock and bull tale of southern travels and

gave them a handout, and as they munched their fill she asked them why they were so kind as to stuff the little bird in the cage with crumbs.

'It's well ye may ask, ma'am,' says Con with a sigh, 'for it's our extravagance and fondness for dum' animals that has us beggin' our bread this day. Sure all we had saved from a hard winter's work screwin' cotton in the far south went to the purchase of this wee gent. He's what they call a rarrer avvis, ma'am, a blue Kentucky cardinal mocking bird, with a voice on him like an angel. Yes, I know ma'am, cardinals is red, but this one is blue, because he was raised in the blue grass districts of old Kentucky and he can imitate all the sweet sounds under heaven. Every cent we both had it took to make his old black owner part with him, but I've never regretted it, and Reilly here too has never regretted it, the way he has solaced our footsore wanderings back to the lakes—for we're sailors, ma'am—with his choonful lay and cheery company. It's heart scalded I am that I'll never be able to work again in a ship for they won't lave me take my cardinal angel on board. They think it bad luck, ma'am, and him willing to sing like a seraph in his azure robes.'

"The upshot of it was that the woman gave Con $5 for the bird, ere he and Reilly departed with trembling lips and deep sighs. Some time later they were out panning and made the fatal mistake of trying this same house. Reilly took the precaution of hiding behind some bushes when Con went up. The same woman came to the door and she had a mop in her hand. She spotted Con immediately and whacked him over the head with the wet mop so hard it snapped off at the head, but she fell to with the handle and belabored him all the way down the walk and clear to the street. Reilly enjoyed the joke immensely and sang out from his shelter: 'Bate him well, ma'am; bate him well; he's an owld villyun.' "

TOPSAIL SCHOONER "MICHIGAN," built in Detroit in 1864, a 200-footer for the trade of the Upper Lakes. 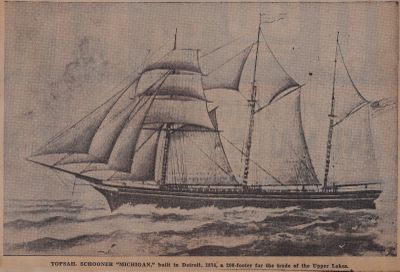