STEAMBOAT SMOKE spells trouble" is an old saying among sailormen, so old it has almost passed out, for all the sailors now except the yachtsmen are steamboating themselves. But one might have known, when Schooner Days was opened to a steamboat letter the other day, that there would be fireworks. So there are, of a mild and friendly kind, the pyrotechnician (how's that, eh?) being our old friend David Williams, of the Collingwood Enterprise Bulletin, Huron Institute, Ontario Historical Society, and other worthy ports-of-hail. He writes:

"Mr. Kirkwood is in error where he says Capt. Sims (the name should be Symes) was in charge of the C.P.R. steamer Algoma when that steamer was lost on Isle Royale. The master was a Capt. Moore.

"The steamer City of Windsor was originally the K. C. Roberts, never the W. T. Robb, which was the tug that towed the Chicora from Collingwood to Toronto in December, 1877. The Roberts was built at Bay City.

After the amalgamation of the Great Northern Transit Co., which owned the Majestic, Germanic, Atlantic and Northern Belle, and the North Shore Navigation Co., Capt. P. M. Campbell, who was an active partner in the G.N.T. Co., with some others bought the City of Windsor and operated her out of Collingwood.

"Lockerby should be William Lockerbie. If above is of any value to you, O.K."

"That was a fine bit of news in Steamboat Days by Mr. Kirkwood Saturday night. I read it with a great deal of interest, also a good picture of Capt. Williams. He is a wonder. I remember all those steamers except the Osprey and India.

"The Carmona was formerly the Beatty Line steamer Manitoba, the first steamer that entered Fort William harbor, the date being August 16th, 1873. There was a narrow channel dredged through the bar that year. The Cambria was formerly called the Champion, and was used on the St. Lawrence River towing.

"The Matawan was one of the old size Welland Canal propellers, and, as a steam barge I saw her in Collingwood with a load of corn. Going in she grounded near the dummy light and after discharging the cargo went on the drydock to repair damage received in grounding.

"I had a mate on the R. P. Ranney named Thomas Van Stan, a very fine chap. The Matawan loaded part cargo at Windsor and in the cargo were two car loads of melons. The steamer went ashore and was wrecked below Sand Beach. Mr. Van Stan was one of the crew of the wrecking steamer sent up to try and release her. Most of the men who loaded her in Windsor were colored. When the wrecking steamer was returning to Windsor, and When near the dock, some of the colored men shouted, 'Hey, Mr. Van Stan, what became of all them 'ere watermelons?' They, of course, were of more importance to the colored folks than the lives of the men.

"The iron steamer Meteor went ashore near Spanish River, 1883, and the wrecking tug International brought her to Collingwood to go on the drydock. This was in June, 1883. The three-masted canal schooner John Miner was also on the dock for bottom repairs and a new foremast. The Meteor was the first side-wheeler to be put on the drydock, which was opened May 24th, 1883. The propeller Oneida, a passenger and freight steamer, being the first to go on the dock when it was officially opened, and I was privileged to go on board for the ceremony as my brother was a wheelman. Capt. Conlon, the first officer, seeing me in the crowd, took me on board, and can assure you I felt highly honored.

"It was Capt. John Moore, who lost the C.P.R. steamer Algoma, not Sims, and Mr. Lockerbie was chief engineer on the Athabasca for 26 years. Mr. Cameron being on the Alberta and later on the Assiniboia.

"Just 56 years ago today I saw the Asia sail away from Collingwood. She foundered the following day in one of the worst gales I remember on the Georgian Bay.

"The City of Windsor was formerly the E. R. Roberts, and was built at Detroit in 1883, and later she was called the Michipicoten. The (first time I ever saw her she was aground at Ballard's Reef in the lower Detroit River in the early nineties, and I was told then she was on her way to Collingwood.

"The Meteor was built at Sorel in 1866, and for several seasons used to call often at Collingwood for supplies for the Cook Brothers, lumbermen, who operated along the north shore of the bay.

"The L. Shickluna was old Welland Canal size and built at St. Catharines in 1870.

"There was a steamer Rothesay Castle built on the Clyde in 1861 as a blockade runner and later operated out of Toronto. Do you know if there were two of this name? One later became the Southern Belle."

Thanks, brother Williams and brother McCannel. Let us close the steamer divigation with this little story from Robinson Maclean. He got it in Manitoulin. Next week we'll be under canvas again.

The salvage vessel Handy Boy of Sarnia is now in South Baymouth hauling up 12-ton chunks of the steelwork of the George A. Graham, of Port Arthur, which it stacks on the shore, to load for scrap iron later. The wreckers estimate 1,500 tons, but others call that a "Jew's guess." Her gross tonnage was 2,409, but that would not necessarily provide 1,500 tons of scrap, nor even 500. Gross tonnage is a measurement of cubic content, not of weight.

The Graham was originally an American vessel, the propeller Marina. The name plate taken from one engine by Diver MacKenzie says - "Engine No. 201, Steamship Marina, No. 1, The Globe Iron Works, Cleveland, Ohio, 1891." The vessel herself was built by the Chicago Shipbuilding Co., at Chicago, in that year.

Captain Robert Sanders, postal master at South Baymouth, was the hero of the day the Graham foundered.

His son, Robert, and his nephew, John Sanders, were playing along the shore, picking up net corks on that stormy time in October of 1917. They were looking for the passenger vessel Henry Pedwell. Young Robert looked up and said: "Here she's coming—upside down."

But it wasn't the Pedwell upside down, but the Graham, rightside up, that was driving in with decks level with the water.

The Graham, loaded with grain from Port Arthur for Port McNicoll, had had her cargo shift and jam the wheel cable in the sheaves so she had no steerage. The waves rolled over her and she came in with her decks awash, as pictures taken by her second mate, a man from Goderich, show. Her captain was named Ewart. Captain Robert Sanders went out with his tug Evelyn and took two women and a man off her, and the rest of the crew stayed until night. Just as Captain Sanders got the three off the Graham a wave he estimates at 50 tons of water slapped down on the spot they left. She sank in 15 feet of water, leaving some of her still above the surface.

Parts of her have been taken away from time to time. Her bell hangs in the South Baymouth schoolhouse. Her whistle is on a factory in Winnipeg. A week after she struck the captain of the tug Angus Morson went aboard and took a revolver from the captain's desk and pulled the trigger "to see if it was empty." He shot through the planking two inches from his mate's foot.

The Graham was 385 feet long, and differed from present grain boats in having a hatch ahead of her pilot house, and having a separate boiler house.

BAYMOUTH SCHOOL Where the Graham's bell calls the boys and girls.

THE HANDY BOY at work saving the Grahams' skin.

THE GRAHAM as she came in with decks awash—a snapshot by a Goderich sailor. 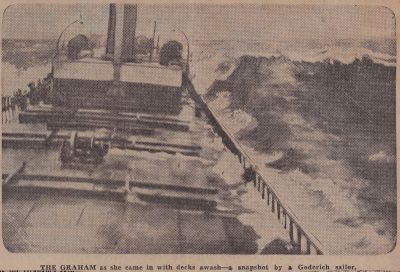