YES—in answer to Capt McCannell recent query — there were two Rothesays, or at least one Rothesay and one Rothesay Castle, among the steamers on Lake Ontario years ago.

The record is confused, from causes which will be apparent, but ancient mariners are quite clear about there being two distinct steamers.

Capt. John Williams well remembers them both. The first was named the Rothesay Castle, and was built on the Clyde in 1864 as a blockade runner for the American Civil War, like the Chicora, which she greatly resembled. She was bought by Andrew Heron and Capt. Thos. Leach in 1866, at the end of the war, and brought to Toronto for traffic on the Niagara route.

Some records state that she was rechristened Southern Belle for her lake venture, and that she was sold to New Brunswick purchasers in 1874 and was burned at Shediac, but rebuilt and returned to Lake Ontario. This may be so, or it may be a confusion with the other steamer. What is certain is that the Southern Belle ran upon the boilers of the old steamer Monarch at the Eastern Gap in 1875. She was refloated, and after some years as an excursion boat was broken up in 1891. Frankel Brothers, of Toronto, got some or all of her junk. One of the writer's earliest marine souvenirs was a brass galley-tap from the Southern Belle, acquired on a schoolboy visit to the Frankel yard on Jarvis street, or Sherbourne Street, we have forgotten which.

All who remember the Southern Belle, ex-Rothesay Castle, agree that she had small paddleboxes, British saltwater style, and that her hull was iron.

R. B. Clarke, native New Brunswicker, whose home is now 169 Keele street, Toronto, came in the other day to tell us about the Rothesay.

"As a native of the Maritime Provinces with the love of the sea in my blood, I have followed Schooner Days with great interest, especially the recent digression into steam," said he.

"In last Saturday's Telegram, Captain Jas. McCannel, of Port McNicoll, asks if there were two steamers named the Rothesay. There was undoubtedly, in addition to the 'Rothesay Castle,' another steamer called the Rothesay. When I lived in Saint John, N.B., I frequently traveled on the river and heard old-timers tell of the palatial Rothesay, which had become something of a legend on the Saint John to Fredericton route. This Rothesay was the largest and most luxurious steamer to ply on the Saint John River up to that time and, indeed, was so in advance of the needs of her day that she proved unprofitable on that service, so was sold to parties who brought her to Toronto. From here she operated an excursion service to Oakville and other points.

"There used to be a picture in the city hall corridor of an early Toronto harbor scene and the steamer Rothesay was prominent in the foreground. This picture must have been removed, as I have been unable to find it lately.

"The Rothesay was a side-wheel steamer with beam engine and, I believe, was built by Small & Hatheway, of Saint John, who built many steamers of this type in the days of their popularity. The Rothesay was probably named for the village of Rothesay, a very beautiful river resort near Saint John.

"Pictures of the old Francis Smith, of Owen Sound, very much resemble in general appearance those of the Rothesay."

Finally, Capt. McCannel and fellow-mariners, this from our old friend, W. Q. Phillips, late of the Sagitta, R.C.Y.C., and now of Sarnia:

"There was an enquiry about the steamer Rothesay. As a boy in Toronto I remember the Rothesay was on the Niagara run for a year or two, about 1880. For some time the Chicora, Rothesay and the City of Toronto were running in competition, and the afternoon trip across the lake and back was marked down to 25 cents. Then the Chicora and the City of Toronto got together, and the Rothesay dropped out. She was an ordinary lake side-wheel steamer, with a beam engine, and if there was a Rothesay Castle that was built on the Clyde it must have been another steamer. The blockade runners that were well-known in Toronto were the Chicora and the Southern Belle.

"The history of the Chicora will be found in Mr. Cumberland's book about the Niagara Line, which is probably in the Public Library. The Southern Belle was a similar type — little Cunarders — with raking funnels and oscillating engines. But when the Chicora was brought to Toronto she was thoroughly refitted and was always kept in fine running order.

"My recollection is that the Southern Belle had not been much changed from the original condition. For some years, up to 1886, she ran between Toronto and Hamilton, but was then considered old and slow. I think her boilers were worn out.

"Crossing the lake on the Chicora, I was watching the fascinating engines, and I asked the engineer how they compared for economy with three-cylinder compounds, for they belonged to the paddle-boat era of the early 1860's. He said up to a moderate working speed they were not extravagant, but if pushed for another knot or two coal consumption increased very rapidly."

Rothesay is spelled both with and without the "e" amidships, but New Brunswickers favor ' the longer spelling.

The ROTHESAY, as described by oldtimers who knew her.

The ROTHESAY CASTLE, from Robertson's Landmarks of Toronto 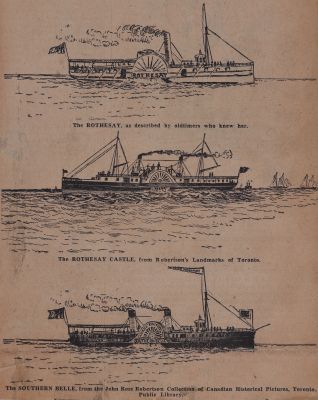