AFTER Capt. John Sullivan became the manager of Haney and Miller's contracting plant—a biggish fleet of tugs, barges, dredges, derrick scows and so forth—his brother Pat took over the Erin. She was no chicken then, for the Erin had been in service in the C.P.R. construction work in 1882, and had got ashore on the Keweenaw peninsula on the south side of Lake Superior that fall. In September, 1883, she took out the first shipment of wheat from the Canadian northwest from Marks' Wharf, Port Arthur, the grain being wheeled aboard her in barrows. Capt. Jerry Clifford then sailed her. At first she had only one deck. A second was added, but she retained the appearance of the old style lake propellers, and like them she had a gaff and boom sail on her foremast.

On the week-end of Nov. 20th, 1904, when Admiral Jack was visiting his brother Pat's family in St. Catharines, they got a wire from Patrick that he was leaving Fort William for Kingston with the Erin, grain laden, and with the grain laden Danforth in tow. It was getting on in the fall. They all awaited a second message announcing his safe arrival at the Soo on the way down. This was in the days before The Telegram's waterfront column carried progress of the freighters every day on their way up and down the lakes.

No word came over the week-end, and Uncle Jack came back to Toronto outwardly cheerful but with an anxious heart; so anxious that he packed his bag intending to take the evening train to the Soo. Then he wondered what he'd say if he found the Erin there, waiting weather, or if she had gone on down the river. After all, there was little to worry about a wooden barge and her tow being a day or even a week late in reporting at the Soo for Fort William. So Jack let the train go without him, and went back to the Walker House.

And then he felt worse. He did not sleep that night. Next day he climbed on the Sudbury train, and Wednesday he reached the Soo. From the station he telephoned the office of the Canadian canal.

"Has the Erin passed down?" he asked.

"Y-e-s," answered the office. "She's passed down for the last time in this world. Ain't ye heard? She's been lost with all hands."

Jack jumped a street car and was at the canal office in five minutes. But so sure was he, in those five minutes, that brother Pat was still alive, that he slapped his knees with a crack like a cannon going off and startled the other passengers with the deepwater announcement: "I'm gonna git him."

At the canal they told him that an American steamer had reported passing the Erin, wallowing in a heavy sea, disabled, and with her barge cut adrift. They had tried to get a line to the Erin, but a heavy snow squall shut her out before they got alongside. When it cleared, hours later, no Erin was to be seen. The would-be rescuer had come on.

"Cap" Sullivan rang up someone on the telephone and walked right out of the canal office and across to the American Soo. He chartered the powerful tug Ganley. She was already bunkered for him, per telephone, and he provisioned her for a week. Everybody told him it was a fine gesture, but a fool's errand. Nothing but a submarine would ever find anything of the Erin. Winter had set in, the Soo streets were drifted with snow, and it was a slim chance if even the Ganley could get back into port before the canal was frozen up. He started out that very night.

First they found the Danforth, at anchor under the land. She had enough sails then to handle, although she had been under barge rig for a long time. When the Erin cast her off she had made canvas, picked up a lee somewhere, and anchored to await rescue by her consort or someone else.

From where the Danforth could fetch, under sail, John Sullivan calculated where the Erin might be, drifting under bare poles. Bidding the Danforth wait until he came back he steamed on into the water wilderness of Lake Superior. The waves rose in fantastic masses like trees and houses and islands, writhing columns of vapor from gelid water boiling in contrast with still more gelid air.

Eleven o'clock of a bitter morning in Lake Superior — when it freezes on Lake Ontario it is below zero "up above" — the tug captain called his charterer. He thought he could see something on the shoreline ten miles away, with his binoculars, that wasn't rock or ice or breaking wave, but what it was he couldn't make out.

Jack Sullivan stared without putting the glasses to his narrowed eyes.

"That's Pat!" said he. "That's the Erin at anchor. We've got him. Lemme at that telegraph."

He rang the tug's engines wide open, and the Ganley went boring through freezing Lake Superior like a cannonball.

In half an hour every deckhand could see the Erin all right, her green sides glazed with ice, a nondescript flag snapping in the zero air from the head of her stumpy mainmast.

"That's the cabin table cloth," said Jack. I ought to know, for many's the meal I've made off that. He musta blown out every flag he's got, to be flying that distress signal."

The tug surged alongside in a lather of foam and splintering ice-skims. The Erin was riding to a single anchor, with a second chain hanging limp from the hawsepipe.

"Bad work, Patsy," commented Jack critically. "Two anchors down's no better than one unless you even the strain. Erin a-hOY!"

There was no answer but the grinding of the chains in the hawsepipes and the hiss of the freezing water as it lapped the fender-strakes.

On the frozen shore, half a mile away, could be seen the shacks of a few fishermen. Jack headed the Ganley there with a snapped order— "Get that yawlboat ready." No "lifeboat" for the old schooner man. Yawlboat was what he always called it, whether on the timber davits of an old-canaller or the patent thing-majigs of the ancestors of the Queen Elizabeth.

In short order the tug was riding in the swell opposite the shacks and her boat was bobbing across to the rickety landing. Jack Sullivan himself sculled her. He jumped 'ashore and strode towards the nearest house. He was met by a man muffled in a faded overcoat under a schooner cap.

"Looking for you, Pat," said Jack, matter-of-factly. "And now that I've found you, what're you doin', actin' like a swell at Palm Beach or the new Jerusalem, with the poor old Erin ridin' lightless and alone to one anchor and nobody troublin' to keep watch on her?"

The younger brother hesitated like a kid caught in the pantry.

"Well, ye see, Jack," he explained, "it was kinda this way. We got it heavy coming down the lake and our coal and our engines played out. So we cast off the Danforth, 'cause we knowed he could get somewheres under sail. We'd blown out that fores'l of our own and could only drift. So we kep' on driftin' this way. We'd burned the last lump of bunker coal in the gale, and we had to burn the bulkheads and the cabin fittings and the grain in the hold to keep warm. So we kep' on driftin' this way, and I managed to get her under the lee of Michipicoten with the rags of the fores'l, and then I let go the big anchor.

"She was snug while the westerlies held. Last night it blew hard and she parted the chain on her big anchor. I'd given her the little one, too, just in case, and that held her. It's holdin' her now. But it won't hold her if the wind comes around.

"W'd eaten everything on board but the grain three days ago, and the boys were gettin' fed on boiled wheat for breakfast, dinner and supper, and burnt wheat in the stove to keep the frost out. So we've all come ashore for a square meal of fish, and then we're gonna git a fishboat to take us to the nearest telegraph, if it ever lets up blowin' and get a tug to come for the Erin, if she still holds on to that little anchor.

"And ye know darn well she won't last twenty-four hours," cut in the practical John. "Git yer crowd aboard and haul down the table cloth. We'll provision ye from the Ganley and we'll have ye in the Soo tomorrow."

On the way they picked up the Danforth, and entered the river in triumph. 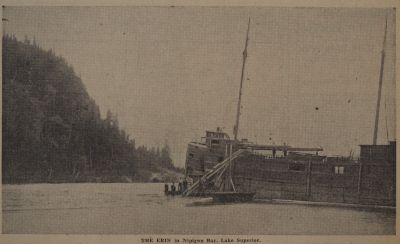