"'THAT," said the city man who had come down for a day's duck shooting, "is what I call good pie."

"And why not?" beamed Mrs. Hutcheson, "with such a rolling pin as I've got?"

The city man had driven a hundred miles to sit like wee Moses among the bulrushes, shivering for hours to gain a few ounces of meat and a million feathers. What with the getting up in the dark, and the hours of cold, followed by the warmth of the beach cottage, and the third piece of pie with the flaky crust, his cerebration was a little retarded. He could only murmur, "Rolling pin?"

Then he was in for it.

Fifty-some years ago this fall—-Scott Hutcheson was not quite sure, how many—-a little lad fought his way against the wind from his father's farm to the wave-lashed beach of Weller's Bay.

"Wrecks coming in," excited men shouted, as they pounded past him in cowhide boots, or clattered by in buggies. It would be the Belle Sheridan all over again—-she had been lost on the beach with all hands but one, in 1880.—-Few vessels touched those pitiless sands and lived—-the Garibaldi had been got off, but some of her crew froze to death.—-They'd telegraphed to Trenton, ten miles north, and a special train was going down to Wellington, 20 miles south, to bring up the lifeboat.

Scott Hutcheson—-for he was the little boy—-wrestled his way in the wake of the hurrying helpers. He lost them, and came out on shore somewhat above where the crowd was concentrating, A stubby point concealed the gathering place. Little as he was, Scott wondered why the men had not come to where he himself reached the water. For there, right in front of him, like the nose on his face, was a wreck backing into the breakers.

When her stern rose high he could see her name plainly, black letters on a white board, "QUEEN OF THE LAKES of KINGSTON." And like a monarch harried by an angry mob, she flung her head up and faced the snarling waves, backing from them linch by inch and fathom by fathom. She had come across this way all the weary miles from Presq'Isle Point, fighting every foot, dragging her two anchors that could not grip the sand and the shale.

As Scott arrived, breathless, the fight ended. With a thud that could be felt if not heard above the uproar she settled solidly, smacking the sandy bottom hard, and rising no more to the waves. Her cargo of coal ballasted her so that she lay there like a dock.

The seas poured aboard her over the bows, filling her decks from rail to rail, and spilling out over the sides. With the slope of the bottom her bows were lower than her stern. Her crew scrambled aft and took refuge in the cabin there.

While Scott stared, wondering where all the would-be rescuers had gone, a wave came tumbling in and chased him back up the bank.

It threw things at him—-sand, gravel, beach stones—-and something larger, smooth and round, a shining cylinder of maple-wood. A rolling-pin.

Scott grabbed it as the wave rushed back. It seemed a living thing escaping from destruction, and he hugged it to his chest, for it was bitter, bitter cold. Then he saw more wreckage in the water, planks and ropes and gratings, and he could see that the waves had burst into the cabin and chased the crew out. They were fighting to get the yawlboat clear, that still hung on the stern davits. The way the vessel lay she made a little lee for the yawl. Six men and the woman cook jumped into the tossing boat, one by one, and when the captain veered out the painter and cast off, the next wave almost washed it ashore.

Then Scott Hutcheson, as little boys will, became suddenly frightened, and thought the crew were coming after him because he had picked up the rolling pin. He stuffed it under his jacket and ran like a rabbit.

He was not concerned at what had become of the crowd he had been following. He was relieved to find that a crowd was not following him, Where the others had gone we shall hear some time later. For this time let us stick to the Queen of the Lakes and her rolling pin.

The little boy kept on running, and he kept on hugging his rolling pin. He must have stopped doing both some time, because he met a little girl. And when they were married he gave her the roiling pin. And she is still Mrs. Hutcheson, and still making pies with it. It is a fine mellow piece of white maple, turned a rich golden brown by half a century of rolling out pie crust for sailors and farmers and duck hunters -- and for Scott Hutcheson. It is probably as old as the Queen of the Lakes herself, and she was launched eighty-one years ago, twenty years after Queen Victoria was crowned.

It so happened that this pie crust story was rolled out and crimped and pricked fifty-two years to a day after the waves tossed the rolling pin to Scott Hutcheson -— and within a few hundred yards of where they did the trick, For the schooner was driven ashore at Weller's Bay on the 19th of November, 1886, close to where Scott Hutcheson's fishing and shooting camp now stands on the lake margin of his father's farm.

The Queen of the Lakes held together in spite of the seas pounding her. She was thirty years old, almost, when her rolling pin fell a prize to little Scott. She had been built by or for G. H. Ault at Hatter's Bay in 1857. Her registered dimensions were 129 feet long, 23 feet beam, 10 feet depth of hold, and 283 tons, but then you will look in vain for Hatter's Bay on the charts, for it has vanished under the name of Portsmouth, where the penitentiary is, but that is where she was built.

A tug came along with a steam pump, and they got the cargo of coal out of her (she was loaded for P. D. Conger in Toronto), and without much difficulty she was towed off the sandy shore where she had bedded in. Her forefoot was gone and she had received so much damage that extensive repairs had to be made. She never looked the same afterwards, for they cut her long mainboom in two, and gave her a mizzen mast. With the three masts she did not sail as well as she had.

She had plenty of mishaps in her life, without this added handicap of bad steering. The renowned Capt. Pat Sullivan, whose rescue was recounted recently, almost lost her-—and his own life—-in Lake Erie in 1870, the second season he was in her for John Riley of St, Catharines. She was dismasted when loaded with iron ore. Yet Pat was a lucky man. He began his sailing on Good Friday, 1865, and his six most successful seasons were those he began on Fridays. Capt, Bob Foote and Capt. Mike Livingston were other old-timers who suffered much at the hands of the Queen.

She was lying in Charlotte in December, 1907, when we we stormbound there in the Stuart H. Dunn. Old Capt. James Oliver —-"Sassy Jack"—-had her then. We wanted a fair wind for Toronto, he wanted one fair for Kingston, for she was loaded with coal for Swift's or Soward's. There came a lovely sunny morning like we have had so often this November, and Capt. Oliver telephoned the weather bureau in Rochester.

"Light southwesterly winds, fair and mild," they told him.

"Any bad weather in sight before I can get to Kingston?" he asked.

A light southwester was right down the Queen's alley, but no good for the Dunn, trying to make a daylight dash for Toronto. It would be west and northwest before night, we knew, dead ahead. So we left our sail covers on, and cast off Capt. Oliver's lines for him.

The Queen of the Lakes floated down the long channel to the lake, with her frost-darkened foresail rising fold on fold as the donkey-engine winched up throat and peak halliards. The crew gave her the jibs by hand, and she quickly gathered way and headed for Kingston. The mainsail rose next, and she was going fast, for the wind was coming off the shore strong. They started on the mizzen, but before they got it mastheaded it was more sail than she needed -— the wind bites so hard in the fall of the year—-and they settled it down again. She altered her course to pick up the lee of the north shore as soon as possible.

Like us, Capt. Oliver expected the wind would be northwest before night; and so we lost sight of her.

That night Capt, Oliver and his crew were back in Charlotte, and the Queen of the Lakes was at the bottom of Ontario. She is there yet, held down by 500 tons of hard coal. Eight miles offshore she opened up under the starboard quarter, and filled so fast he had just time to get the yawlboat down and throw the crew into it before the schooner disappeared. 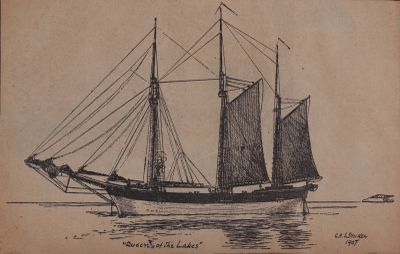