AROUND the bend of the shore little Scott Hutcheson came upon the crowd which he had been following and lost, that 19th of November, 1886. They were lining the beach by hundreds, for another wreck was in the breakers there, and in worse case than the defiant Queen of the Lakes from which he had got the rolling pin.

This, he heard them shout, was the Ida Walker, Capt. Jim Savage's vessel. She that used to be the New Dominion of Picton; the one that had drowned Capt. John Allan and his son and first mate, Alf Allan, coming out from Oswego, three years ago, after her name was changed.

All that Scott could see of her was her two masts, leaning in the November gale and swaying in different directions as the bursting hull warped and twisted under the merciless pounding of the battalions of waves.

Like the Queen of the Lakes, she too, had tried to catch the shelter of Presqu'isle Point when the gale drove her out of Wellington with half of her cargo of ten or twelve thousand; bushels of Prince Edward County barley. She had anchored under the Point and dragged across but she had come in at a more dangerous place than the fighting Queen.

She had struck to the eastward of the crooked entrance past Bald Head into Weller's Bay, outside the long gravel bar which then formed a snug' cove in the bay's northeast corner.( Lake Ontario abolished that bar thirteen years ago, wiping out hundreds of yards of it in one night, and making a new entrance into the bay.)

The shore here was more exposed, and the seas swept over her in floods. Her yawlboat was wrenched from the davits. The bulwarks went out of her with the third comber, and all that showed of her above water now were her masts and cabin top. On this hundred-foot square of safety her whole company huddled, clinging to the mainboom and gaff which had fallen across it. They were wrapped in blankets against the piercing cold. Every wave deluged them with bursts of spray, and a driving snow squall hid them from sight even when the waves receded.

Women were on their knees in the sand, praying for help for the crew. Men had lighted bonfires to warm the shipwrecked should any be washed ashore, like young Jimmy McSherry had been from the Belle Sheridan, six years before.

Still hugging his rolling pin, Scott heard the screaming whistle of the freight train coming back from Wellington with the lifeboat. She pulled up on the single-track line that squirmed around the shore of the bay, and with shouts and much sweating the old-fashioned boat was dumped off its flatcar and dragged to the bay beach. A short pull across the wind-whipped water brought it to the bar which formed the cove. Dozens of helpers dragged it up over the gravel and across the bar into the surf where the planks of the Ida Walker were coming in by ones and twos and dozens.

Capt. Hugh McCullough took his place in the stern with the long steering oar. His brother, Bill, pulled stroke, with Horatio Curlett next him. There was Ed Cleary and George Insley, and, Selem Palen and Ed Bedell, all Prince Edward County boys, of the old Loyalist stock. They lashed themselves to the thwarts. "If she goes over we stay with her," they vowed. Then volunteers grabbed the boat by the gunwales and ran her over the beach stones and into deep water, up to their necks. Gasping, floundering, they held her until the six oars, bending under the tug of six strong men, bit the wavetops and lifted her clear of the innermost breaker.

Alas! Fingers numbed with hours of freezing in snow and lake water fumbled it. The line dragged across the wreck and washed back into the boat on the crest of the next breaker.

Four times those brave Prince Edward men forced their lifeboat lakewards, and let her drive back on the combers to rescue the perishing. Three times their lifeline fell short or could not be caught by the benumbed and exhausted crew. The third time the lifeboat was so close that the volunteers could look into the eyes of the men and the woman on the cabin-top, and their agonized expressions cut Capt. McCullough to the heart.

"Boys," he said, "We've got to get them if we have to swim to them with that line. Let's try again!"

This time, by a miracle, the line caught and held. Walter McMahon, the mate of the Ida Walker, leapt into the lake with the cook in his arms. They were seized and dragged aboard the lifeboat. Carefully hauling in and easing off as the seas it required and balancing the boat on their oars, the lifesavers rescued every one on the cabin-top. As the lifeline that held the boat to the wreck was cast off a greater wave than any yet burst over the whole schooner. The masts fell and the seas tore the cabin-top from the deck. Its fragments washed in on the beach before the lifeboat made a safe landing.

Little Scott Hutcheson's most vivid memory of it all was the Ida Walker's is captain's angry stamping around the bonfire, cursing his luck for ever having tried to pick up barley at Wellington.

Wellington was a most dangerous port to load at, for it had no shelter from the westerlies, and unless you had the luck to get your anchors down on the blue clay bar, like the Kate of Oakville did, you could not ride out a gale there; the only thing to do was cut and run. Presqu'isle was the nearest shelter, but it was hard to get in far enough there when drawing ten feet, with the sea running off the Point.

Perhaps it was Presqu'isle rather than Wellington that was the Ida Walker's undoing, or for that matter Weller's Bay. There was plenty of it water and plenty of shelter inside t that big lake in Prince Edward's shore, but the crooked and shifting entrance past Bald Head, uncribbed, undredged, and unlighted, denied access to it in heavy weather.

The gale blew itself out. Fishermen approached the wreck of the Ida Walker and scooped wet barley out of her shattered hull and dried it on the beach and sold it back to the farmers who had grown it. They had sold it to make beer in Oswego and they bought it for cattle feed.

The Ida Walker had been built at Roblin's Cove, on the Bay of Quinte, near Picton, in 1867. Like four or five other schooners launched in that year of Confederation, she was christened "New Dominion." Her length was 115 feet, beam 25.8 feet, depth of hold 10.8 feet and registered tonnage varying 187 to 220 tons, according to the systems of measurement. She was registered in Whitby as the New Dominion, official number 80772, owned by John McLeod of Kincardine in her first year; but by 1877 she was registered as the Ida Walker, managing owner, R. Robertson of Kincardine. She was brought back to Lake Ontario, possibly by Capt. Allan, who was drowned from her, and traded from Prince Edward County ports to Oswego and Toronto until wrecked.

The wreck occurred fifty-two years ago this fall. Scott Hutcheson, who saw it as a little boy, along with Oscar L. Morrow, the present town clerk of Brighton, Ont., has a row of cottages now facing Lake Ontario at Weller's Bay, immediately opposite where the Ida Walker struck and foundered. Her wreck is still discernible on the lake bottom, in 10 feet of water, torn away down to the turn of the bilges by the scouring of the ice and the pounding of the seas. It is a famous place for big bass. Scott Hutcheson hauls out his fish boats by means of the Ida Walker's centreboard winch, which he discovered a few years ago bedded in the sand of the hull. He has also a plank from her, and a pump-plunger, and a length of iron pipe from the pump-well. For years her iron capstan, also recovered from the wreck, decorated his front lawn, but, seizing up from rust or cracking by the frost, it was broken up. But Mrs. Hutcheson still makes excellent mince pies with the maple rolling pin from the Queen of the Lakes, found by her future husband that same day the Ida Walker was wrecked.

SCOTT HUTCHESON on Barcovan Beach, Weller's Bay, with a plank and pumpwell from the IDA WALKER.

The IDA WALKER'S centreboard winch, still in use at Weller's Bay for hauling out fishing boats.

SCOTT HUTCHESON shows one of the IDA WALKER's pump plungers. 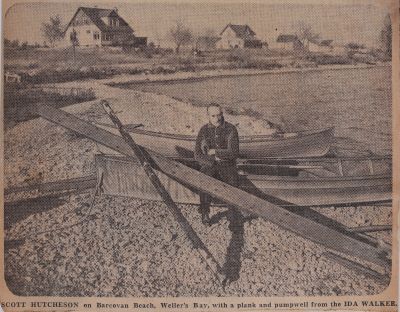