WE WENT very quietly all day across Lake Superior on the first day of December, for there was little sea. But Capt. Harry Finn believes in preparedness rather than appeasement.

Preparations for a December passage of the Great Lakes with a winter storage cargo were no lick-and-promise matter with the good ship Robert P. Durham. They began when she left Owen Sound on the morning of November 30th, they continued across the Georgian Bay and Lake Huron and Lake Superior, and the final touches were put on after she got under the elevator spouts. They could not be done earlier, and they could not be completed later. Once the wheat was in her it was to remain undisturbed till spring. No bathysphere or submarine has yet been invented that will enable you to penetrate a cargo of grain. The only treatment it yields to is the shovel or the unloader. Once the cargo is in, the hull has to stay "as is," so everything must be perfect first.

Beginning at the bottom, as we went up Lake Superior, the bilges were thoroughly cleaned, limber chains pulled, and water run through the limbers, which correspond to gutters or drainage pipes ashore. The angle formed by the steel sides and the steel floor of the cargo holds is covered with bilge boards, three-inch plank in double thicknesses, one fore-and-aft and the other athwartships. The purpose of this is to keep any leakage from getting to the grain. It runs along in the triangular tunnel so formed till it reaches the pump wells or the ballast holds below the grain.

These bilgeboards were taken out, renewed wherever necessary, and the outer layer caulked with red oakum. Then every crevice was thoroughly plastered with cement.

When the hatches were on over the grain they were first covered with tarpaper, then with ten new red tarpaulins, never before used, thirty-five feet long and costing $50 apiece. The edges were bound down with battens, or steel corner covers, and the battens secured tight with steel clamps. Steel strongbacks were clamped down over the tarpaulins across the hatches, so that the covers could not be wrenched off or burst up.

The windows in the steel "round tower" forward, where the ship was steered, and the captain, mates, wheelsmen and watchmen lived, were covered with wooden or steel shutters, and nearly all the doors were bolted within and caulked with oakum from without. Only enough doors for immediate use were left open. The thirteen sliding windows of the upper wheelhouse were caulked with oakum inside, leaving two free forward and one free on each side.

Finally, lengths of rubber hose, plugged at the ends, were hung in the six-inch scupperpipes which led the water from the decks to the lake level, inside the plating. The purpose of this was to take up the expansion of the ice, should the scuppers freeze, so that the hose would be flattened, instead of the steel pipe bursting. All plumbing traps exposed to the frost were treated to doses of oil, or oil and tallow mixed. This treatment eventually reached all valves, seacocks, pumps, etc. Barrels of black oil were used for this purpose.

So armored, the Durham was prepared to defend her wheat and her life against Superior, Huron, St. Clair, Erie, Ontario and their connecting canals and rivers, and against Old Man Winter himself.

The layout of lake freighters is simple. There is a square cabin at the stern, which covers the engines and firehold, and provides living accommodation for the engineers, firemen, oilers, deckhands and cooks. Here is the galley (kitchen for shore folks) and two dining rooms, and here everyone eats.

At the opposite end of the ship, with the long row of hatches intervening — sometimes as many as thirty; ten in the case of the Durham—is a three-story tower like a Christmas cake cut in two, with the round half towards the bows. These are the captain's quarters. Just the reverse of sailing ship procedure, where the forecastle was no castle at all, but a sort of bow cellar, usually under deck, where the sailors lived, while the officers dwelt at the opposite end of the ship, in such state as the cabin could afford. In the lake schooners all cooking was done in the galley in this cabin; in salt water the galley was forward; in the lake freighters the galley is aft, as already said.

Capt. Finn's own quarters in the Robert P. Durham occupied one semi-circular deck of the forward structure. They were as spacious as an apartment house flat; and all paneled in dark oak, with white enameled beamed ceiling. He had a large sitting room or office, and a bedroom that would have been equally large if his bathroom had not been taken off it. And this bathroom was a bathroom. Three pieces. Forward of these rooms, in the half-round, was a still larger room with six curtained windows looking forward, a settee, seven comfortable chairs, a table and a bed.

This last was an extra. Capt. Finn is a pretty wide man. His bedroom cot was wide enough, even for him, but it was arranged crosswise—beg pardon, athwartships. The Robert P. Durham is a champion roller, and Capt. Finn got tired of standing all night alternately on his head and on his feet, after standing on his feet all day. So he installed the still wider bed, in the "spare room," forward, and arranged it fore-and-aft, in line with the ship's keel so that when she rolled he would roll with her, instead of being stood up and down.

She did roll one of the watchmen out of his bunk, an upper one--watchmen have to sleep some time—-and the lad took precautions against another such rude awakening by fitting two "leeboards" to the outer edge of his shelf, so that he could only roll between them and the ship's side.

Guest quarters were in the deck below the captain's flat, two bedrooms with wide double berths, washstands with running water, ample wardrobes, and a big three-piece bathroom across the hall. The rest of the "bargain basement" was devoted to the mates and wheelsmen. Thus of the twenty-one in the ship's company, seven lived forward and fourteen aft. All rooms were generously steam heated and electric-lighted.

Above Capt. Finn's quarters was the short winged bridge and lower wheelhouse; and above that again, and most used, the half-round of the upper wheelhouse. The wheelhouse has plenty of room for the big brass wheel and binnacle; the radio direction finder; the engine telegraph; a chart table; a radio telephone and radio set; and a cot for the captain, who often spends twenty-four hours in the room, living on sandwiches. This is a pleasant place, day or night. It has linoleum flooring, windows all around, and—-most important of all-—six steampipes completely encircle it! After freezing on open bridges watch and watch, with Lake Superior spitting snow at below zero temperature over the weather cloths, and the frost vapor billowing up from the yet unfrozen water, one is in a proper frame of mind to appreciate a steam-heated wheelhouse, electric lighted, wide, dry and handsome, with steam coils keeping the windows clear.

Along the hundred yard stretch of deck between this round house forward and the square house aft—a stretch of steel plate fenced by nothing but thirty iron stanchions on each side, connected by two lines of wire—was rigged the steel wire lifeline. It was like Fido's runway in polite back yards. The lifeline was ten to fifteen feet above the hatches. On it were rove half a dozen rope lanyards, which would travel along it. To go back for meals from forward one was supposed to seize a lanyard, watch a chance as waves burst aboard and make a run for it, the lanyard traveling with you along the lifeline. When the deck was continuously flooded you could swing by the lanyard from hatch to hatch till you got close to the cookhouse door, where waist high steel bulwarks protected you. The hatch covers were a foot or so above deck level, and formed islands or stepping stones when the deck was completely under water.

By marvelous luck we got into Port Arthur after midnight on the morning of Dec. 2nd, without having formed a single icicle on Lake Superior. The only ice we saw was huge cakes floating in the harbor, from the Kaministiquia River, broken by the passage of loading freighters. It had been 18 below at the Head the trip before, but a thaw was breaking this first nip of winter and carrying away its traces. There was snow and ice on the ground, and things looked pretty dismal ashore.

Tell you more about the trip later.

THESE DECK VIEWS, F0RWARD AND AFT, SNAPPED ABOARD THE ROBERT P. DURHAM AND ANOTHER FREIGHTER, SHOW WHAT THE "LAST TRIPPER" PREPARES TO FACE. AS IT TURNED OUT, THE ROBERT P. DURHAM'S 1,400-MILE VOYAGE WAS MADE WITHOUT SHIPPING MUCH WATER OR FORMING ONE ICICLE. 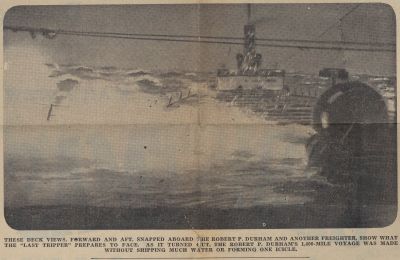