(This continues the story of how the steamer Robert D. Durham of Toronto got the winter storage load which now floats at the old Tree Line Pier No. 4 in Toronto harbour.)

FOLLOWED two bewildering days at the head of the lakes, the second and third of December.

Inspector Miller, rigid as a high court judge, came to inspect us at the minute promised. Then we crept from elevator to elevator, getting a hatchful here and a holdful there, two thousand bushels at this place, ten thousand at that, and six thousand at another, until every one of the five cargo holds was filled to the rim of its steel hatch coamings.

A winter storage cargo of wheat is not like one of coal or other bulk freight poured in at one time and place. There are eleven hundred different classifications of grain, and it seemed as though we had most of them. As a matter of fact, we could not have had to take more than six, for we had five cargo holds, separated by steel bulkheads, and in only one of these did we have to make a "division" to separate the grades.

A division is a serious matter for the crew, more serious than a division in the House of Commons.

The first lot of wheat has to be covered with grain-proof separation cloths, big enough to make a mainsail for the Bluenose. The edges are all carefully tucked up and covered with plank, and the planks shored into place, and then more planks laid on top of the cloth, to protect it. All this has to be done before the next few thousand bushels may come in.

One had to admire the skill of the trimmers who moved with the ship from elevator to elevator. There are about forty-five of them in Port Arthur and Fort William, and they are the best on the lakes.

The long spouts shot the grain in at the rate of a thousand bushels a minute. It piled up in mountains of gold and brown and amber until it commenced to reach the hatches. Grain samplers for the Government, the shipper, and insurance companies meanwhile were out stabbing at the rushing stream with little triangles of metal bent into scoop-shapes around long wooden handles. Each sample went into a steel can, shaped like a fruit basket, or into a labelled bag.

When the grain began to mount to the hatches, the trimmers would jump in, knee deep, and shovel with big wooden spoons made of birch-wood, polished to a rich brown by the friction of millions of grains of wheat, or they would skilfully plant steel trays with wooden handles, something like a washboard without corrugations. These ploughs, as they are called, when placed at the proper angle, direct a stream of grain like a spring freshet, into whatever nook or corner under the deck needs filling. Thus each cargo hold is filled level, with no air-pockets or dogholes for the grain to flow into when the vessel rolls.

There are twenty-seven elevators accessible by water in Port Arthur and Fort William, and three by train. It seemed as though we used them all. One steamer ahead of us did go to nineteen, and the trip before we went to thirteen. The only ones whose names linger were the Pool elevator 7, where we began, the Thunder Bay, the Reliance, Pool 6, the Grain Growers, the Grand Trunk, Pool One, which we visited twice, and Searles, where they had so much pressure the Robert P. Durham went down to her draught marks—-18 feet 5 1/2 inches at bow and stern—-as though scuttled.

These elevators lie in a wilderness of waste lands on the fringes of the two cities. They are hard enough to come to from the water, with 400 feet of steel hull to turn and twist in the harbor ice, but they are still harder to navigate to by land, over endless miles of icy concrete intersected by railway tracks. We gave up trying to get uptown after one attempt. In fact, only Chief Engineer Scott and the writer landed. Mark Grace hospitably taxied me to his shipyard and salvage office, and up to the Lake Shippers and back to the vessel-—which was somewhere else than where we had left her. But after that we all reformed and stayed on board. Covering the Port Arthur-Fort William waterfront without an airplane is too much like trying to do the Sahara Desert without a camel.

But there was one man at the head who always knew where we were, to the minute. That was J. A. Speers, manager of the Lake Shippers' Clearance Association; snowy-haired, ruddy-cheeked, affable, young, cut out for a film bank president or generalissimo of the allied armies. Fifty million dollars worth of bills of lading, shipping receipts and such securities are passing continuously through his hands, and I'll guarantee that he would produce the first or the fifty millionth dollar immediately if the proper person asked for it. He told us to a minute where the Durham was and would be, how much grain she had in and how much she would load at the next elevator, and when.

A great institution, these Lake Shippers at a cost of something like one-thirty-third of a cent a bushel they supervise the progress of the wheat from the prairies to the pan. Thanks to their ministrations the intolerable turmoil of waiting turns to load is ended. They know what every elevator has, to the last bushel, what ships are coming first, and when they will be there. Get your billet from the Lake Shippers and go ahead. You may have to visit nineteen elevators, or only One, but in every case your load is waiting for you.

There are wonders at the head of the lakes, and thirty of them are the grain elevators on the waterfront of Fort William and Port Arthur The cities, as already said, seem to shrink away from these cathedrals of commerce, leaving them in colonies on the waste lands near the lake. The thirty elevators hold ninety-two million bushels of grain enough to feed all Canada a month and how much longer?

We began loading at the Saskatchewan Pool Terminal. Sixty-eight cylinders of concrete—-great organ pipes 230 feet high, if we accept the cathedral simile, in each unit, the whole spread over a quarter of mile of wharfage.

Understand why modern grain elevators are built as a collection concrete tubes? It's to gain strength against the outward pressure of the grain that each tank was built, of reinforced concrete. If they were square, the concrete would stick to the forms used in building them, the corners, and the grain would stick afterwards, in the same places. The smooth, round walls, which look in the distance like fat crowded columns of a Doric temple, are easily swept down. Guilty or innocent, no grain of wheat can escape.

In fact nothing escapes. A forty-ton car of grain came in. Automatic buffers clamped it at either end of a section of track. An elevator hand opened the rough-door and grain began gushing out. The car reared up at the end as by magic, and the elevator hand slid out casually and walked across to a tally sheet, without turning his head to watch this miracle of levitation, or the prancing car. The car tilted to an angle of forty-five degrees, and there could be seen a great steel sheet in the centre, set at an angle to divert the sliding grain to the door, instead of allowing it to settle to the lower end of the car. Then the car reverted to the level and the other end gently rose up. The blade, neatly reversing its angle, shot the other half of the load out of the door.

So back and forth the car was electrically shaken, back and forth and up and down, till emptied of its grain as a dish is emptied of water. The grain spilled into a hopper, registered its weight as ninety-five thousand two hundred and some pounds, on a scale which flattered me with a hundred and sixty-five, and disappeared in a brown river, flowing as smooth as carpet along miles of rubber belting. Yes, miles. Seven of them, if you crave definiteness. There are seven miles of rubber belting in the elevator, and it stores seven million bushels of grain. As much as five thousand good farms could grow in a good year.

That car of grain was sifted like Satan wished to sift St. Peter. If it had been wheat, oats, mustard, weeds, chaff and stubble all mixed, still not one particle could escape. There were pitted cylinders which flung the oats one way and the wheat another. There were fans and sieves and shakers which blew the refuse out. The solid grain was forced to run up hill on belts and take leaps into hoppers like salmon battling a waterfall to disappear into culverts.

Even the fine dust which settled in a floury mist everywhere was a prisoner to the Pool. It was swept by men plying five-foot brushes, and pushed towards open mouthed chutes. Here it would pile up in heaps, while the brushes were busy, to melt like snowdrifts as the chutes sucked it aloft a la vacuum cleaners. All that was left on the floor was a little heap of shining nuts, bolts, nails and screws, gathered up all over the quarter mile by the industrious brooms, and polished silver-bright by the friction of the dust. The dust and the chaff and the waste went up, and some of it became binder for oil cakes for cattle feed, and some of it went to feed the boiler furnaces. So if Satan got the chance he coveted at St. Peter there would not have been enough of the saint left to stick a postage stamp.

"GRAIN SAMPLERS WERE OUT STABBING AT THE RUSHING STREAMS WITH LITTLE SCOOPS ON LONG POLES.-

"ONE HAD TO ADMIRE THE SKILL OF THE TRIMMERS."—LEVELLING OFF THE LAST HATCH FOR THE COVERS. ONE OF THE STEEL "PLOUGHS" IS SEEN AT THE LEFT. 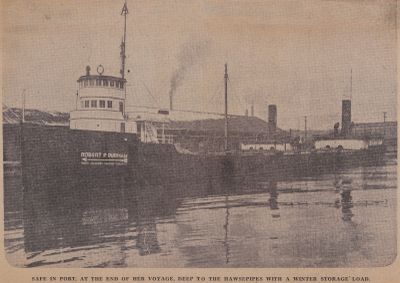