GOING up to Lake Superior in the steamer Robert P. Durham for the winter storage cargo of grain which she brought to Toronto in triumph—-last of the navigation season of 1938—-the writer made the acquaintance of the newest and greatest accessory lake traffic has achieved, the radio telephone.

It's a real lifesaver. When the writer was a boy, shipwreck casualties on the lakes used to mount into the hundreds in a season. Thanks to the radio telephone that will never happen again. Hundreds of lives may yet be lost in some catastrophe like an earthquake or a tidal wave on the lakes, but the possibility of this is remote, and this radio telephone makes it remoter still.

It is the greatest boon to navigation since Noah boxed the compass. Some ships have it, others are getting it, and none should be without it. It is as necessary as a lifeboat, and as useful as a rudder.

First night out Capt. Finn introduced "Schooner Days" to half a dozen captains and operators hundreds of miles apart and we had cosy chats just as if we were at the front door or the fireside.

There were VBG Toronto, VBH Kingston, VBB at the Soo, VBE Point Edward, VBA at Port Arthur; the Huronic, Capt. Wm. Taylor; the City of Windsor, Capt. A. Francis; and Algorail, Capt. Jas. Sykes; and the Laketon, Capt. Clayton Misener; the handsome Renvoyle, Capt. Patterson—-steamers and stations scattered over a thousand miles of waterways in the December night. It was a particular satisfaction to be able to tell Capt. Patterson how much the writer admired his big graceful red-hulled Renvoyle of Midland, for she is an old sweetheart, and whether one meets her on the upper lakes or the Toronto waterfront, she is always a queen. She has a bold flaring bow that sheds the sea, a long sweet curving sheer that springs her up to meet the next one, and a stern as graceful as a clipper ship's, despite the fact that she tucks a stockless anchor under her starboard quarter, like a hanky peeping from a hip pocket.

They all knew "Schooner Days" and C. I. Radford's waterfront column in The Telegram, and some of them remembered "last trip" passages the writer had made with Capt. McCannel in the Assiniboia in previous years. It was like meeting old friends.

All traded us reports on conditions and congratulated us on the fine weather we were having and the prospects of a good trip this time—-in contrast with some of the tough times of the "old stone frying pan," as Capt, McCannel used to call his charge.

Capt. Finn got weather conditions and positions from each, and gave each a goodnight or good morning. He called Port Arthur, made arrangements for inspection and loading, and left messages to be transmitted to Arrow Steamships Limited, his owners. And got replies quickly. He had ordered fuel the same way at the Soo. No delay. From his telephone in the wheelhouse he lined up his program for the next twenty-four hours. Never once did he fail with a good night message home. That alone makes the radio phone worth its weight in gold. It dries half the tears of women who weep while their men work on the water.

There were two fish tugs setting nets in Lake Erie off Rondeau, the Beverley R. Goodison and B. & H. We could hear them discussing conditions, and gave them many a call later on when we got onto the orbit of their weather. They were most helpful.

We heard all sorts of one-way conversations and a few two-way ones, day and night in Superior, Huron, Erie and Ontario. Some American captain in Lake Michigan was discussing with his wife ashore what they would surprise Bobby with at Christmas. She was going to drive to the port where she was bound to meet him. Another American was hiking for an anchorage under the South Fox. It was blowing hard where he was, with snow. Most of the reports were most helpful, for they gave conditions anywhere from twenty to a thousand miles away and told us what to expect and how to shape our course to meet or avoid what was coming.

They say there is a fly in every ointment, and there is one big bluebottle fly in the wireless telephone on the lakes. Its name is Oklahoma Sam, and he is cursed on every ship from spearpole to taffrail staff. Suppose two steamers are approaching in a snowstorm. Steamer A calls steamer B, to insure passing in safety. Steamer A gets the answer "Calling steamer A, calling steamer A, steamer B coming back. We are six"—

Then there will be a toot and a squawk and a throaty voice will cut in: "Station Owe-Kay-Ess-Owe. Radio car No. 44, Radio car No. four-four, signal 60, signal six zero. 1 Stolen car No. OJ3456, stolen car number zero-jay-three-four-five-six, engine number 1,072,529, engine number one million zero seven two thousand five hundred two nine"—and so on, with all the absorbing details of the package of cigarettes in the I back seat and a dent in the left front fender.

In a gap, when it comes, steamer A will cut in again with an appeal to steamer B to "come in please" and give her position, and steamer B 4 will start again and get half-way through, when Oklahoma Sam will barge in with another description of a tractor stolen from in front of Tulsa town hall. The main industry in the state of Oklahoma appears to be either stealing cars or reporting them stolen. There are a few long- winded descriptions of suicides, dope peddlers, homicides and arrests linked into the endless chain, but its body is made of cars stolen, recovered, abandoned or wanted. Morning, noon and night. And that is what the air of the Great Lakes is filled with. No matter how hard it snows.

Meantime steamer A and steamer B, going it blind on converging courses, with the means of telling each other exactly where they are and how they are heading, are choked off like children with the hiccups. If they pass without collision it is just bull luck. If they crash, and one is still able to send out a cry for help she will not be able to get her position to the dozen steamers or stations within call, that might save forty lives. All because Oklahoma Sam is still broadcasting the numbers of stolen cars thousands of miles away.

This comes about because the lake radio telephones and the Oklahoma police have wave lengths that coincide. Other police forces across the continent are able to radio within their own cities or states without spilling over and flooding out the Great Lakes. How about applying a little absorbent cotton to Oklahoma Sam, gentlemen of the Federal Communications Commission?

Wishing you all, Oklahoma Sam included, a Merry Christmas.

CAPT. HARRY FINN Races up the wheel house later and, over the radio telephone, introduces "Schooner Days" to a dozen ships and stations on a thousand miles of waterway.

Of many Christmas cards coming to Schooner Days there's only room for producing one - and this is Rowley Murphy's crisp remembrance of a cargo trip to Saint John, N.B. It has all the snap of salt water and all the clarity of fresh. 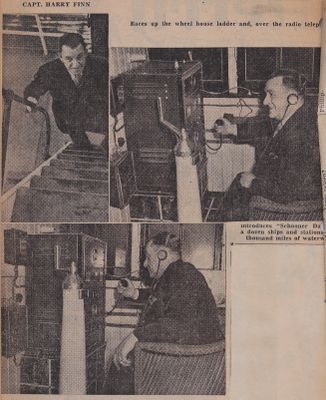