HOW the Queen of the Lakes came to be in the predicament Scott Hutcheson found her in, when her rolling pin was tossed into his arms by Lake Ontario fifty-two years ago, comes out in a chat with our freshwater encyclopaedia, Capt. John Williams, of Toronto. Also some more of that monarch's adventures.

It appears that she had loaded coal for Congers in Toronto at Oswego or one of the south shore ports, and got up abreast of the Island in fresh westerly breeze that was blowing harder all the time. There was considerable sea on, and her captain doubted if she could weather Gibraltar Point, for in those days, 1886, the Eastern Gap was of limited use, and vessels as a rule worked around the Island and came in by the Western. So, much as he hated to do it, he took a hitch offshore, to gain enough room to clear the Island—and that was the Queen's downfall.

In coming around she carried way her heavy mainboom, leaving her without after canvas, and unmanageable, except for running before the wind. There was no help for it, with Toronto coal docks plainly in sight she had to square away and run for shelter at the foot of the lake.

She was owned by the Richardsons in Kingston at this time, although P. D. Conger may then also have had an interest in her. The captain thought he might as well make a job of it and run all the way to Kingston for a refit; but as the wind came in heavier he took a chance on luffing into the shelter of Presqu'isle Point.

Fatal error—-or almost so. That was what wrecked the Belle Sheridan and the Garibaldi which the Mathews firm owned. Each of these vessels had lost her after-canvas; like the Queen, each tried to get into Presqu'isle, each failed to come up without the help of the mainsail, each anchored, of necessity, too far out, and each dragged across to Weller's Bay, failed to thread its entrance, and went in on the beach.

"I knew that mainboom of the Queen's well," said Capt. Williams, "for three years before I had a little contracting job to do for Medlar and Arnot that involved it. The Queen of the Lakes was laid up at the foot of Lorne street, and it was discovered that her mainmast head had gone bad, and the spar would have to be lifted out. This, of course, was when she was a fore-and-after, and had only the two masts. To get the mainmast out I had first to shift the mainboom. I measured it, and it was sixty feet long, and 54 inches around at the bale at the outer end, so it would be nearly a foot and a half in diameter. It was a heavy piece of timber, and when it broke it would tear the mainsail to bits."

THE master of the Queen of the Lakes in 1883-—Capt. Williams does not remember his name at the moment-—was naturally a person of great importance, for the Queen was regarded as worthy of her proud name when she was new. One twenty-fourth of May morning earlier in this same year, when Capt. Williams was on the waterfront in his working clothes, the captain of the Queen approached him with: "Hey, young fellow! Would you like to earn a dollar reeving off signal halliards? I'd like to show the Queen's colors in honor of the day and I've no one to send aloft to reeve the halliards."

John Williams was never too proud to do a job or earn a dollar.

"I might," said he, "but I've no long boots for shinning up the rigging."

"Take mine," said the captain. "There's more than one good pair in the cabin."

So John outfitted himself for the climb, and up he went, up the lower rigging, which had ratlines or rope rungs, and was easy, up the topmast rigging, which had none, and was harder to climb, and up the topmast poles above the rigging, with nothing to support him at all but his sea-booted ankles, After a few minutes' work the Queen had signal halliards rove on each mast and Queen Victoria's colors, the Union Jack and the burgee with the ship's name, were floating in the breeze.

'Here's your dollar, young fellow," said the captain, with a magnificent gesture.

"Thanks, mister," said Capt. Williams, and went his way.

A little later the Queen was towed into the Northern docks to load lumber. And who should be her neighbor but the P. E. Young of Port Dover, Capt. John Williams, master.

Say," gasped the Queen's captain, "are you the captain of this little vessel?"

"Well if I'd a-knowed," said the other captain, greatly embarrassed, , "I'd never a-offered you a dollar for reeving off my signal halliards."

"What would you have done?" asked Capt. Williams.

"I guess," said the captain, still embarrassed, "I'd offer you a drink."

"I mightn't have taken it," said Capt. Williams, "but how about having one on me?"

WHEN the Queen of the Lakes was released from where she had dragged ashore at Weller's Bay, in the fall of 1886, she had to have a much more thorough overhaul and refit than her captain had contemplated when he started running back to Kingston with a broken main-boom dangling over the lee quarter.

It was years before Capt. Williams saw the Queen again, somewhere in the Georgian Bay, for it had happened that their wakes had never crossed from the day they were loading lumber together in the northern docks.

"I ought to know that vessel," said Capt. Williams to himself, "but I'm certain I've never seen those three masts before."

He was right on both counts. When the Queen was launched she was rigged with two masts, a "fore-and-after" as they were called on the lakes, and she was two-masted when she lost her mainboom and drove ashore. But in the refit which followed she was given a small mizzen mast, making her a "three-and-after," which was lake slang for a three-masted schooner.

The drawback to all fore-and-afters of any considerable size was that their mainsails were so big that they required heavy crews to handle them, on account of the difficulty of reefing and the weight of the forty or fifty-foot gaff and the long mainboom, which might run to eighty feet in length. Bluenose has one that long now. To overcome this difficulty more and more fore-and-afters were re-rigged with a short mainboom and gaff and a small mizzenmast through the cabin-house to give the necessary sail area. This was what had been done with the Queen, and that is why Capt. Williams was puzzled by her new appearance.

In her case, as with all converted fore-and-afters, the new rig was easier to handle, but less efficient. She did not steer so well, with the pressure split up between two sets of after sails, and she could not get to windward so well as before.

Fore-and-afters always beat three-and-afters working to weather there was something decidedly wrong with them if they couldn't.

TALKING to Capt. Williams about the Queen of the Lakes Schooner Days asked him about the Straubenzee, and the incident mentioned by a Prince Edward correspondent, Mr. Dulmage, when the Straubenzee had a hard time on the south shore of Lake Ontario. Capt. Williams recalled his own wild ride in the Straubenzee off Oswego, but she was flying light on that occasion. On the one mentioned by Mr. Dulmage, when her deckload shifted, she was lumber-laden. Capt. Williams thought this must have been when Capt. Ben Tripp had her, and put the phenomenal load of four hundred thousand feet of pine aboard her. She rode out a gale at anchor off the Devil's Nose. He himself had never had more than 325,000 or 335,000 feet of lumber in her. He made one trip from Penetang with that, oak below decks and basswood above, and it was quite enough, for like all the "old canallers" the Straubenzee was crank when given much of a deckload. She could carry four hundred thousand, but not properly under sail. That was really a tow load.

WAITING FOR A SLANT

This is how they still load them down with lumber in the Maritimes - a study of a New Brunswick tern schooner by A. Van, Telegram staff photographer, on a recent visit. It was one of the finest Christmas cards Schooner Days has received. The "terns" of New England and the Maritimes differ from the vanished "three-and-afters" of the lakes in having their masts all of one height. 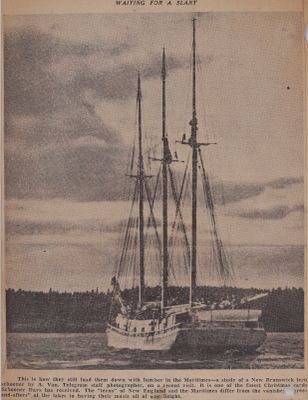