WHY should it be anything to you "all ye that pass by" that hand long since dust beckoned from the window of an empty stone house in a vanished port at sundown? Yet it made this recorder's heart miss a beat. Because the signature, diamond-cut on the inner side of the pane in this Port Britain mansion eighty years before, might have been —

SHE was the second schooner he had seen, and being the. Then and tenderhearted he fell in love at the second sight. For she was not full-cheeked and fat-haunched like the red-and-white Speedwell, first beheld, but dark and graceful and alluring; tall, two masted, with many sails and a rakish sheer.

She was drying canvas one morning, after rain at the old Waterworks Wharf at the foot of John street. High aloft was swinging a fly-by-night or three-cornered maintopmast staysail of the pattern yachtsmen now call a "queen" in contradistinction to the loose four-cornered one they call a "fisherman." She was painted black above and lead color below, with lead color coveringboard, red beading, red quarter-chocks and red hawsepipes; topgallant rails forward and aft picked out in white with black caps; and a white-sided cabin with green shutters. On her sharply curved clipper bows and across her transom under the square and compass was the name CAROLINE MARSH. The name that, for all the recorder knew to the contrary, might be sparkling to him at this time from the inside of this ancient window pane as he trudged up the Port Britain hill in the flame of a late summer sunset.

That Caroline Marsh herself must have been some little pig-tailed lass somewhere, sometime, pride of her father when the ship which was also his pride was launched, mattered little to the schoolboy who read her name for the first time at the Waterworks Wharf. Girls meant nothing then and schooners everything. That Caroline Marsh grew up to be the belle of Hope Township, married, had a family, was far from his ken or care.

Later he was to wonder where the schooner had been built, and when, and for whom she had been named. Here, half a century afterwards, in front of an empty house, in a long disused port of which nothing remained but a forgotten name, he was close to the answer to all these questions.

Caroline Marsh had been the cousin or the niece of the Marshes whose diamonds had made their marks on window panes eighty or ninety years ago. There were other scratches on the glass, particularly one "R. B. Marsh, 1856," on the window facing south. Robert Marsh, Miss Caroline's uncle, had built the house, and he might well have cut this inscription. But it was another signature, with the date; "1853" and without initials, or with initials worn away by two generations of industrious housekeeping, on a pane in the west window, which had halted the heartbeats of the sentimental remembrancer.

This signature might have been Miss Caroline's girlish proof of a diamond engagement ring, made in the moonlight with her cousins about her in her uncle's house. Her own home was a couple of miles to the northwest, on the north side of the Kingston road; a great wide red brick structure, with eyelid windows in the east and west gables and a wide colonial front door glazed with circle-leaded panels of glass too grand for testing diamond rings upon. The eastern oriel overlooked a high-fenced park where her father kept seven tame deer. She was the daughter of that William Marsh, Robert's brother, and third William in the Loyalist line, who put Port Britain on the map. And he had built and named the schooner Caroline Marsh at the mouth of Marsh's Creek, within half a mile of where the recorder was halted by the beckoning hand-o'-write.

The schooner was launched the year before the diamond scratched this name. Whether Caroline's was the hand or another's. Shipwrights had worked on her all winter, in the open, on the lake beach, as was the custom. April 27th was the launching day, and 1852 was the date. Victoria was only fifteen years on the throne, and the Crimean War was still in the future. Caroline Marsh was merry and mischievous as any girl of sweet and twenty should be. She was probably betrothed at the time. She married soon afterwards. Perhaps the schooner was a wedding present, a dot, a dowry; if so, a handsome one. Two hundred acres of land was the portion of each of the Marsh sisters, and each of three had her name on a schooner her father built. The Marsh schooners were insurable for from $10,000 to $12,000 at the time of their launching. On June 18th, 1853, the year of the arresting autograph, the schooner Caroline Marsh cleared from Port Whitby with a load of staves for Quebec, a five-hundred-mile trip, to taste seawater. By 1890, when she was wrecked, her wake stretched back over a quarter of a million miles of water, salt and fresh. It had not all been smooth sailing—-and of this more, soon.

A trip to Port Hope only last Saturday, a few years after seeing :the Port Britain diamond-cut signature-that-might-have-been, shattered the little illusion that had been built up yet brought compensation hundredfold.

The window pane in the Port Britain house with the date "1853" was gone. It had been replaced by another, and the house was no longer vacant, being occupied by Mr. and Mrs. Edgar Eley. And it was learned that the signature could hardly have been Caroline Marsh's, for she had changed her name by that year by a romantic marriage. Miss Caroline Marsh became Mrs. Wm. Bletcher, wedding a shipping and forwarding merchant in Port Hope's thriving grain and lumber trade. She had four children, Caroline, Sarah, William and Marian. Caroline became the mother of W. G. Brent of Toronto, commodore in 1915, 16 and 17, of the Royal Canadian Yacht Club.

Caroline Marsh outlived the vessel christened for her, and past the allotted three score years and ten. Of course she had died long since; but her third child, Mr. Wm. Bletcher, Jr., a remarkably fine old gentleman who will be 86 next Twelfth of July, was living in Port Hope. He retired from the customs service some time ago.

From him came the consolation which more than compensated for the shattered fantasy of the diamond-cut autograph. This was a likeness of Caroline Marsh herself, when the schooner was the bride of the lake and she was the bride of William Bletcher. Halftone reproduction cannot be trusted to tell all, and though more skilled to wield a marline spike than etch a lady's charms in print, let this recorder try:

Here she is the bride of 1852. That must be the date of the daguerreotype, for while she looks a child a ring is on her hand, and this was the year of her marriage.

It is no surprise at all to find her portrait exactly what one had felt she must have been like. A round firm face, small humorous mouth, full lips ready to pout, merry little nose very straight, wide eyes under brows well marked and gently curved, with a touch of temper in them; broad low forehead framed in waves of soft brown hair, parted evenly.

Ears were even more modest than ankles 87 years ago, and hers are, of course, invisible. But from the drop of the long gold pendants, at least two inches deep, it is certain that her hidden ears were small and set close to her head. Her expression is slightly mischievous, a little serious, quite serene; she is a beauty and knows she is a beauty. Her eyes are gentle, frank, witty.

She is dressed in the height of fashion, probably in her wedding gown. Her pointed bodice of grill-patterned silk is cut almost straight across, showing her firm, round throat, and shoulders that slope enough to merit the admiration of her time. The short full sleeves are gathered well above her elbows. She wears a stiff collar of ribbon, forming a bow caught by a large round brooch , nad a long gold necklace descens to her waist. From it something is suspended, either her smelling salts or the little book covered by her right hand. On her right arm, above the wrist she wears a bracelet and clasp, and there is a gold ornament, perhaps an heirloom, where the tight waist of her basque-—was that the term?—-spreads to the fullness of her bouffant skirt.

Her pose, with the hands wide apart, is young, restful, unstudied. The picture is such a beautiful composition that only the fidelity of the reproduction of the flowing silk reminds one that it is a photograph almost ninety years old.

"CAROLINE MARSH" From a daguerreotype and a memory. 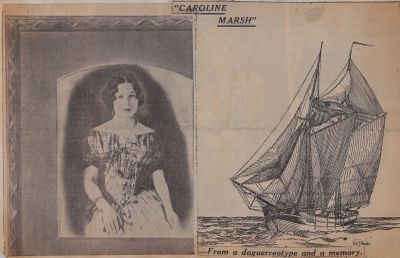