HAVING lost a schooner and found a lady-—the late Mrs. William Bletcher, Sr., of Port Hope -— Schooner Days readers of last week may have the patience this week to hear something that can be recalled of the vessel which started the quest which ended so happily in the discovery of Mrs. Bletcher's charming portrait of 1852. This was the schooner Caroline Marsh, christened with her maiden name, built at Port Britain at the mouth of Marsh's Creek and launched April 27th, 1852.

The originals from which the Dominion registers at Ottawa were compiled cannot be found, and what has survived is not very helpful. The register of 1873, the first collected, has this entry:

As the Caroline Marsh was afloat in 1873 and remained afloat till 1890, it might reasonably be supposed that the two entries refer to the same vessel, in spite of the difference in names, one being given as "Caroline" and the other as "Caroline Marsh," and the different figures for length. They could not be of the same tonnage, breadth and depth, and yet one be longer than the other, and it would be a further strange coincidence that two vessels of similar names and exactly the same tonnage, breadth and depth, should be built at Port Hope in 1852 and owned by the same gentleman twenty years later. The early registers, printed from hand-written records, are full of errors of transcription. For example, the "Caroline" is entered in one column as a steamer and in the next but one as a sailing vessel; and another sailing vessel, in the same year is entered as a steamer and in the next year as a schooner. This vessel was actually neither a steamer nor a schooner but a barquentine.

To further complicate matters there is a dubious tradition in the Marsh family that there were two schooners named after Caroline Marsh, one wrecked, and one built to replace her. This tradition is contradicted by Mr. Thomas Marsh, aged seventy-five, who as a boy of ten, teamed barley to load the Marsh schooners in Port Hope, and remembers when his grandfather William Marsh's masts, cut in Hope Township, used to be hauled to the Port Hope waterfront and rolled into the harbor from the edge of Marsh street, which is now high and dry inland through filling. He remembers the Caroline Marsh being wrecked, but does not remember two of her name.

There were indeed two schooners named Caroline on Lake Ontario in the early days, one with square topsail, and registering 88 tons, built at South Bay in 1854, two years after the Caroline Marsh was launched, and the other registering 90 tons and built at Belleville in 1847. Neither of these seems to have been connected with the Marsh fleet.

Mr. Marsh, as already said, built vessels for his own needs, and to use the timber he was cutting on his 3,000 acres in Hope Township., He had lumber, timber, shingles and cordwood to ship out, and all the supplies for a growing community to bring in—-salt, machinery, furniture, drygoods, groceries. As fast as he found a purchaser he sold his newest vessel and built another. He built six or seven in this way in the mouth of Marsh's Creek, and the Caroline Marsh was the next to the last. She had a series of owners before becoming the property of Capt. James Ewart, Sr., of Cobourg, in the 1880's. 4 Capt. Donald Manson, of Port Hope, was her first master. He may have owned a share.

On June 18th, 1853—she cleared from Port Whitby with a load of staves for Gilmour and Co. in Quebec. Capt. Manson was then in command. Thomas Henderson of Port Hope was owner of the Caroline Marsh by 1856, and he may have been the original purchaser. Capt. Colwell was sailing her that year, and reached Chicago with her on Dec. 4th, 1856, with 151,000 feet of lumber and 148,000 feet of lath from Collingwood, coming through a heavy gale on Lake Michigan.

In 1861, with the same master, she cleared from Chicago for Collingwood with a cargo of over 12,000 bushels of wheat, racing the American schooner Magic, which cleared for the same port with 11,500 bushels of corn. The odds would be in the Magic's favor, from the lightness of her cargo, but which arrived first is not known. The Caroline Marsh also raced the old "barque" Malta frequently in the Chicago-Collingwood trade, from 1856 onwards. In 1864 she was the property of Capt. Colwell, or Caldwell as the name sometimes appears, and E. S. Vinden, of Port Hope. Capt. Colwell is still remembered by old timers as always appearing in high top boots. They were fashionable in the fifties and sixties, knee high, brightly polished, with facings of red or blue morocco at the front of the knee.

One of her later masters is said to have sailed her off out of the court's custody and traded all summer with her either in Georgian Bay or on Lake Ontario and, fearing to return, to have run her ashore and abandoned her. The details of this piece of barratry are obscure, and the same story is told about another vessel.

The hero, of the exploit was one of the saltiest characters of the Port Britain district. He was always in trouble. In one town where he had run foul of the law he was chased and leapt into the harbor. He escaped by swimming, although his pursuers fired shot after shot at his bobbing head. In another he made off with a hundred dollars. Hotly pursued, he rolled the money into a tight wad, and hid it somewhere on his person. Caught and searched, no money was found, but it appeared after he was thrown into jail. He was convicted and sent to prison, where he learned something useful — honesty and stone masonry. When he got out he plied his new trades in his native village, forsaking the lake which had inspired his youthful follies.

The Caroline Marsh was wrecked at Oswego in 1890, long after this harum-scarum got out of her. More of her adventures next week.

William Marsh built this mansion a century ago or more from bricks made on his farm laid by bricklayers he brought out from England. It was his family residence and one of the most important inns of Upper Canada. Here the post horses were changed daily on the stage coach run from York to Kingston. Travelers left Toronto early in the morning and reached the inn by evening. There was a secret room in the building, said to have been used to conceal Patriot refugees during the rebellion, although the Marshes were of stout loyalist stock. The room has been searched for, but without success. At the east end was a large wing corresponding to the one shown on the left of the picture. This was the hostelry part of the mansion, with bar, driving shed, stables, and ballroom above. It has long been torn down. Beyond that William Marsh had a deer park, where he kept seven deer, sheltered by wolf-proof palings, for the howling of wolves was often the curfew along the Kingston road. The old mansion is still occupied and in good repair.

"EVEN ABOVE THE BRIDGE THE OSWEGO RIVER WAS AT TIMES NO LILY POND."

OSWEGO HARBOR ENTRANCE WITH TWO VESSELS ASHORE, WRECKS IN THE GREAT GALE OF NOV. 7th, 1880.—The inner light, sixty feet high, over which the spray was flying when the Caroline Marsh came in, is in line with the foremast of one of the wrecks. When the Caroline herself was wrecked six years after the trip here related, she struck close to where the other wreck shows in the foreground. Capt. Wm. Wakely, Sr., father of Capt. W. R. Wakely and Capt. Charles Wakely, was mate in her at that time, as a Port Hope reader kindly points out. Fort Ontario is on the rise of the hill shown to the left. 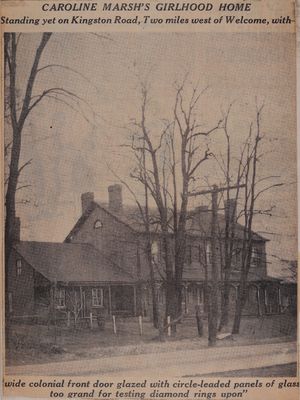