IT is impossible to tell about the Marsh schooners (which is what started us on Port Britain) without telling about the Marsh family. Here are some snapshots, perhaps poorly focussed, under developed, badly printed, but the best a schooner man can do when it comes to genealogy and family history.

The American colonies are in revolt. Colonel William Marsh, English gentleman, descendant of that Captain Marsh who lost his lands to Cromwell through loyalty to King Charles, and long established in Manchester, Vermont, knows not what to do. Side with his neighbors and his in-laws, who are hot for revolution? or stay with King George III? All night long he rides back and forth, back and forth, between the village church and the village inn, making up his mind. In the grey of the dawn he sees light. He must be true to his commission oath and serve the king, no matter how stupid his advisers. Colonel Marsh waves a silent adieu to his sleeping wife, puts his weary horse to the gallop, and reaches the loyal rendezvous before the rebels can prevent him. His wife awakens, knows from his untouched pillow what he has done, and packs the family silver for concealment from the revolutionaries. Her own and her family's sympathies will not save it from the mob, when they learn her husband has declared for the king. Before it is yet daylight she sinks the chest in a pond. Her neighbors do the same with their treasured plate and polished pewter, for revolutionaries are no respecters of property when they want bullets or bullion.

The war is over, and Col. Marsh and his sons come to Canada, United Empire Loyalists. "He who served a crown," as his tombstone says, "can now scarcely find a place to lay his head." But the Crown is not unmindful. Five thousand acres of untouched wilderness are awarded to the colonel and his young sons, some in Prince Edward, some in Hope, some in the Georgian Bay. The sons are satisfied, but the colonel cannot begin anew on his own 1,050 from the Land Board of Mecklenburg granted in 1789. With one son he returns to Vermont, having been granted amnesty by the successful rebels, to spend his remaining years with his wife in the old home. But they never find the family plate. There was, quicksand at the bottom of the pond.

It was winter in 1794 when the Marsh brothers, Johnston, Herbert and Samuel, came to Canada to take up the challenge of thousands of acres shaggy with forest. They crossed the Bay of Quinte on sleighs with their belongings. Near the Carrying Place they came upon a clear pond with young people swirling like swallows on the quaint wooden shoes with little iron keels which were the skates of the time.

"Whoa!" cried Samuel, as young Jane Ostrom swung by like a swift. "Just see that beautiful girl! I shall never marry anyone else."

His brothers humored him. They halted, he procured an introduction, and on the 25th of February that same winter, he and Jane Ostrom were married. They spent the first year together in Prince Edward County.

Samuel Marsh's kinsman, Leonard Soper, located in Hope Township in Durham County, fifty miles to the westward, in 1795. His wife, one of the Marsh daughters—-Mary—-had ridden saddleback all the way from Vermont. Samuel and his bride joined them in Hope Township in 1796. Neither was yet past twenty.

The young husband hewed out a log house, on the point running into the lake between Peter's and Eley's farms at Port Britain now, to the east of the harbor which his sons were to develop. Port Britain, as has been explained before, was three miles west of Port Hope and sixty miles east of Toronto. The "port" part of it has long since vanished. A very small village remains. Here, in 1797, his first child was born. He christened him William, after the colonel. Six little sisters and two brothers followed in thirteen years.

Samuel built a larger house on the forty-foot lake shore road which Capt. Danforth hewed through for the government in 1800. The lilacs he planted around it for the mother of his many children are growing yet, and thick trees in a sturdy grove, but the old house has gone, all but a few of the pine sills he cut from the forest with his broadaxe.

He did not enjoy it long. On Aug. 10th, 1812, in the capital town of York, he received his commission as lieutenant in the First Durham Militia. Mrs. Roy S. Powell, 237 Cortleigh boulevard, Toronto, his great-great-grandchild, has that commission now. It is probable that he fought to save his future great-great-grandchild's city from the Americans in the Battle of York, April 27th, 1813. It is certain that Sheaffe's regulars bivouacked in Samuel's house and barn the second night after the battle, as the broken army streamed through Port Britain on their retreat to Kingston. The lilacs are still spoken of as "the place where the soldiers slept," but the occasion has almost been forgotten. Old villagers think it was in the Crimean War, but it was in the War of 1812.

Samuel Marsh died this year, 1813, from fever and ague, the curse of the Canadian pioneers. It seems to have been a microbe released by the newly cultivated soil and spread by mosquitos. His sister, Mrs. Soper, was suffering from this disease in Port Hope. He contracted it while visiting her. Feeling he was stricken, he called in another brother-in-law, Mr. Sexton, to make his will, in the house among the lilacs. Within a week both men were dead of the same disease; and young William, sixteen years old, was left with the responsibility of his widowed mother, six sisters and two brothers, the youngest four years old.

William was not without resources. His father had to take his first year's harvest to Belleville to turn it into flour, but very soon, perhaps by 1802 and certainly by 1806, he had a mill of his own, with one set of stones and an upright saw, which ground his grist and chop, and his neighbors', and cut their logs into plank and boards. In the assessment rolls of Hope Township for 1807 Samuel was assessed for this mill. The great expense of the mill was the stone, buhr stone brought out from France, cut and faced and cemented in six inches of plaster-of-paris. Such a stone cost £125 currency. Samuel was also assessed for two horses, six oxen and five milch cows, the slow moving oxen being of more use in clearing forest land than horses or mules.

But young William's chief resource was his own strength of heart and tireless energy. There has been a William in the Marsh generations from the time of the cavalier and probably before, the names usually running William Samuel succeeded by Samuel William. For purposes of clearness we are calling each generation's William by his first given name. Of them all, William Marsh, born 1797, son of Samuel, the pioneer, seems entitled to be named William the Great. "Bill the Shantyman" they still call him in Durham, a democratic token of affection understandable in his native village, which was created by his vigorous development of the lumber industry.

The origin of Port Britain was the pond or basin, now dried up, into which he floated his logs for rafting. Here he built his ships, and from here he shipped his forest products-—tar, tanbark, potash, pearl-ash, lumber, shingles, staves and timber; as well as chop and flour from his mill. The Canada Directory of 1857 describes him, among the three hundred and fifty inhabitants of Port Britain (there are now thirty-five), as "William S. Marsh, lumber merchant and shipbuilder," but this only incompletely indicates his importance in the community.

He it was who built the launching ways, discernible now in five feet of water, at the foot of the side road west of Lot 22, near the site of the log cabin twenty feet square his uncle, Leonard Soper, had built for his twelve children. This was the first house between Port Hope and Bowmanville and it was west of the mouth of Marsh's Creek and east of the present Willow Beach summer colony. There is a tradition that the Marshes had a pier here at a very early date. If Samuel did not build it, his son William did. The shipyard in which William built in all seven vessels, was here, and he seems to have launched his ships directly into the lake, heaving them off to kedge anchors rooted in the blue clay bar opposite.

Hope Township in Durham County is itself a monument to William Marsh. He turned its forests into farms and ships and filled its empty acres with homesteads. On the Kingston road, two miles north of his native Port Britain and two miles west of Welcome, about the year 1824, he began the building of a new family seat. Brick was still rare in Upper Canada, and was often imported from Oswego by vessel. William imported brickmakers and bricklayers instead from England. The old mansion, still fronting the sun, had wings east and west, a wide veranda across its face, and an imposing glass-panelled central doorway. We gave a good picture of it the other day. Two large chimneys crowned the east and west gables. There were many fireplaces, and a large family ballroom. The east wing has been demolished.

It was stated erroneously that this east wing contained the Marsh Inn which was an important feature of the then new Kingston road. This is incorrect. The hostelry was a mile further east, and on the opposite side of the road. It was a large log building, with accommodation for man and beast, and was the change-house on the journey from York to Kingston. Its site is now an easy drive of two hours from the heart of Toronto. The stage which left York early in the morning reached Marsh's Inn by evening, if the road was good, and one-third of its toilsome journey eastward was then behind it. Fresh horses were put in, and the mail drove on for Belleville, the next change. The stables and coach sheds were across the road, on the north side. The stage service was not operated by William Marsh but by a company.

In the next generation the old inn passed out of use, and was moved back in the vicinity of the fine red brick mansion built by or for William Marsh, Junior, grandson of the pioneer Samuel Marsh. The children used it as a playhouse. The Toronto lady mentioned, Samuel's great-great-granddaughter, recently recalled the hoard of pennies, coppers, and bank tokens of Upper Canada, which they gathered in their play from where they had fallen years before through cracks in the old inn floor.

Next week we may attempt to chronicle the Marsh fleet, a task more difficult than you may suppose.

THE POND WHERE THEY BURIED THE SILVERWARE

LEFT IF FOR KING GEORGE

LILACS WITH TRUNKS LIKE ELMS MARK THE SITE OF THE SECOND HOUSE SAMUEL MARSH, PORT BRITAIN PIONEER, BUILT BEFORE THE WAR OF 1812. 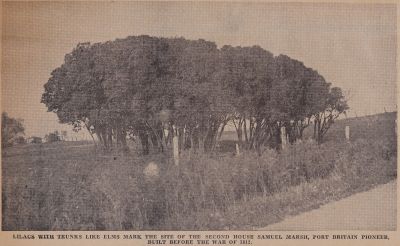 Colonial mansion of the Marshes

Pond where they buried the silverware
Groups of Related Records