"MARSH, WILLIAM S., lumber merchant and ship builder." So reads the old Canada Directory for Port Britain in 1857 when the now almost vanished village had 350 inhabitants. The place is, as has already been explained, on the north shore of Lake Ontario three miles west of Port Hope and sixty miles east of Toronto.

OF the great Marsh fleet from Port Britain even the names have in part been lost, for their building was begun before registration was at all regularized. Even up to 1873 Lake Ontario vessels were still being entered in Montreal. Port Britain, which William Marsh founded, never attained to the dignity of a port of registry, the vessels launched there being registered in Montreal or elsewhere, and recorded as built "at Port Hope." This was giving that short word "at" a radius of three miles.

As far as can be learned, the vessels William Marsh owned or built at the mouth of Marsh's Creek, were:

1. The Trafalgar, which was trading to Port Whitby in 1847. Capt. Michael Harry Livingstone, master of the old ferry Mayflower in 1898, said then he had shipped as a boy in the Trafalgar fifty years before. The Trafalgar is mentioned in the harbor records of Port Whitby in 1847 and 1848. Her name, like that of Port Britain, reflects the strong British sentiment of the creator of the ship and the port.

2. A schooner of 200 tons renamed the Wm. Cawthrie and wrecked at Scarboro Beach Park site in October, 1844.

3. A schooner "named after the wife of John Brown, who used to live on Dorset street, Port Hope." There is a schooner Ann Jane Brown mentioned in the Port Whitby harbor records of 1845, as paying export tolls, and a schooner A. J. Brown, of 100 tons, probably the same vessel, recorded in a Globe list of vessels in 1856. Her owner and master in that year are given as. Capt. Manson, possibly Donald Manson or his father. She is recorded on the list as built "at Port Hope, 1853," which may be a rebuild or an erroneous record of the actual building at Port Britain or Marsh's Creek.

5. The schooner Caroline Marsh, built in 1852, and named after William Marsh's second daughter.

6. Possibly a second Caroline Marsh, or the Caroline. That there were two is a belief in the Marsh family, and two sets of dimensions, not greatly differing, are extant for a vessel of this name or names.

7. Of the Nellie Marsh, of which no record is extant, all the writer can say is that after the Caroline Marsh was lost in 1890 he heard that a sister ship, the Nellie Marsh, had been burned, in the following year.

9. Possibly another vessel of the same name, or named only Sarah Ann. Two vessels are said to have been named after Mrs. Powers, William Marsh's youngest daughter, Sarah Ann, one of which was wrecked at Oswego.

Some of the adventures of the schooners named after the Marsh sisters have already been given, and more are to follow.

There were several other schooners bearing the Marsh name on the Great Lakes, but these were not of William Marsh's building nor connected with this Marsh family. There was the George A. Marsh, lost with two families in curious circumstances off Pigeon Island in 1917. She was an American bottom, built by Footlander at Muskegon, Mich., in 1882. A steamer George A. Marsh was sunk in collision with the steamer City of St. Catharines off Michigan City in 1870. There was also a three-masted schooner Phineas S. Marsh, which foundered on Lake Superior in 1896. She was built at Black River, on Lake Erie, in 1867. None of these vessels was at all connected with the Marshes of Port Britain.

"MAKING SAIL"—Three-master KATAHDIN towing out of Goderich under an autumn sky. The Katahdin was an Upper Lake vessel, hailing from Owen Sound, and had no connection with the Marsh fleet except this—she was sailed, when the photograph was taken forty years ago, by Capt. Walt Colwell, of Port Hope, the acting captain of the Caroline Marsh in an adventure recently described. 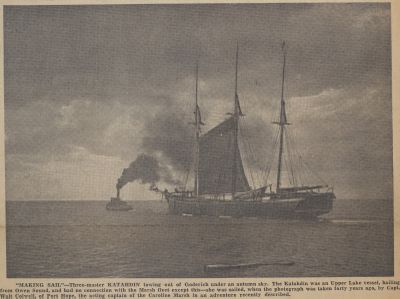