THERE were three marsh marigolds growing in Port Britain, the homely humor of that long since faded port used to run, Jane Ann, Caroline Ann and Sarah Ann, each shining brighter than the other. All three were daughters of the great William Marsh, king of Hope, who furnished the township with everything it needed, from ports to pianos and schoolmasters to schooners.

Country humor may have taken some liberty with their names, and because Jane, the eldest, and Sarah, the youngest, each had Ann for a sheet anchor, they bestowed that upon Miss Caroline, the middle sister, whether her parents had done so or not. Each girl had a farm for her portion, from the three thousand acres cleared of timber by their enterprising father, and each had a vessel bearing her name, built by the same enterprising father from the same Hope township oak, and masted with spars of his own white pine cut on the ridge west of Welcome and north of Wesleyville on the Kingston road. Port Britain, it must be repeated, is still discernible on the old lake shore road, three miles west of Port Hope. It is just before you come to the summer colony of Willow Beach.

William Marsh built or bought nine vessels in all, and most of them grew from the forest on his many acres fronting on his half mile of lake beach at the mouth of Marsh's Creek. It would have been fitting if Port Britain had been created a port of registry, for then "of Port Britain" would have appeared on the starboard half of each Marsh schooner's transom. But the port's rise to greatness was not timed properly for that. Its first products may have been registered in Montreal, as was the galling custom even after Confederation. The three sisters, or the vessels named for them, were perhaps lucky to be enrolled as "of Port Hope" nearby -— this being a port of registry-—although they were "Britain born" as the phrase went. The alternative would have been to hail from Montreal.

The first schooner to bear the Marsh name was the Jane Ann Marsh, 256 tons and two-masted, named for William Marsh's oldest daughter, then nearing her twenty first birthday. The schooner was built at the mouth of Marsh's Creek in 1848. The date of her launching is not known, but she was in full commission in 1849, for entries in James Rowe and Co.'s ledger for that year in Port Whitby show her bringing in from Montreal a cargo of ploughs, shovels, plough-moulds, nails and other ironware for John Kerr and the farmers and blacksmiths of Ontario County. Like dear Jane Ann herself, the careful elder daughter whom the ninety-year-old daguerreotype reveals—-his father's favorite, and beloved by all—-the new schooner early busied herself with farm affairs. Jane Ann was a thrifty , young housekeeper in her father's big brick mansion on the Kingston road, with the glass-panelled front door that still looks out on the high way traffic, though the high-paled deer park to the east has vanished. She inherited the spirit of the pioneer loyalist ancestors. She herself was named after the gallant Jane Ostrom, her grandmother, who put a group of thieving redskins to flight by brandishing her butcher- knife and showing them how far she would thrust it into them if they dared touch her precious flour barrel. She was alone then with her baby, Jane Ann's father-to-be, in the first Marsh log cabin by the lake, within a few hundred yards of where the Jane Ann Marsh was launched half a century later.

Miss Jane was such a good pioneer that when her husband, George Henderson, of Port Hope, died, leaving her a young widow, cumbered with a whole orchard planted entirely in Tallman Sweets through some mistake in the stock, she patiently grafted every one of the young trees with fresh varieties. In a few years she had all the marketable apples of the age in rich yield —-Northern Spies, Russets, Rambows, Winesaps, Greenings. Jane Ann's orchard was a good producer for three quarters of a century, until the deadly frost of 1934 killed it; fifty years after Jane Ann and her schooner had both been laid away.

The oft-quoted Globe list of 1856, and the Dominion register at Ottawa, are dumb concerning the schooner called after Jane Ann Marsh, which only indicates their incompleteness. An early commercial list (Thomas' Register, 1864) notes of the Jane Ann Marsh that she was then owned by J. G. Brown, of Port Hope, measured 256 tons, still classed sufficiently high to carry grain, and was insurable for $4,500, about half her value when new. She had received "large repairs" in 1857, which may indicate that she had been driven ashore and needed a thorough overhaul when she was got off.

Mr. Thomas Marsh, grandson of William and consequently a nephew of Jane Ann, remembers that one of the Marsh schooners was wrecked near Rochester, he believes, and brought back to Port Hope. This might be the occasion, although it would be before his time. He was born in 1864.

This wreck may have occurred at Toronto, for the Jane Ann Marsh struck on the shore of Toronto Island in a blinding snowstorm on the fifth of December, 1868. She was bound for Toronto on the last trip of the season, with a load of cordwood from the Bay of Quinte. William Ward, then a boy, and his colored pal, Bob Berry, the great professional oarsman, had a terrific time rescuing Capt. Jas. Burns and his crew. They were sixteen hours in the rigging.

At least Capt. Burns and the mate were. The cook and four men huddled in the cabin, often up to their knees in icy water, as the breaking seas flooded it. Billy Ward and Bob Berry dragged their boat to the bay side and rowed along the shore to windward of the wreck, then dragged it across the island, and launched into the breakers. The wreck was only two hundred feet out. Again and again their boat was capsized within fifty feet of the wreck and driven back on the shore. Bob Berry's head was cut open in one of the spills.

The first time they reached the schooner they could only take off two men. They picked three off the next time. Again starting out their boat was again swamped and capsized. These three trips required six or eight tries, but the remaining two were rescued by noon. Their clothes were frozen fast to them. To keep themselves from becoming numb, young Ward and Berry stripped off their clothes and rolled in the snow on the beach between trips. The shipwrecked were cared for at the cottage of David Ward, William's father. Cordwood was strewn along the beach for a mile, and the vessel was believed to be breaking up. William Ward and Bob Berry, and David Ward and Dick Hill, who helped in the rescue were given a purse of $143.25 at Christmas, raised by their friend and neighbor, Robert Mead of Toronto, who took great interest in the island folk.

Jib sheet blocks with the name Jane Ann Marsh burned into them were dredged up from the lake floor fifteen hundred feet south of Gibraltar Point by Roger Miller and Sons in 1914. Autographed jibsheet blocks are a novelty, but the schooners in the Marsh fleet probably had their respective gear labelled carefully to avoid confusion in fitting out.

The Jane Ann Marsh was not completely wrecked in 1868. She was refloated the following spring and taken to Georgian Bay. W. Holdaway, now living in Port Britain, saw her in Owen Sound in 1879, much weatherbeaten and blistered. She is said to have left her bones to the westward of the entrance to Owen Sound Harbor in 1883, although the identity of the wreck there, supposed to be hers, has been disputed.

The next Marsh schooner was the one named after Jane's sister, Caroline, already mentioned. Her story has already been told in part, but we may give more of it. 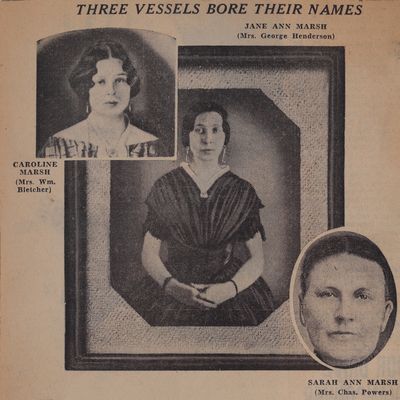