CULMINATION of the Marsh ship-building enterprise—-it was only one of William's many activities—-came with the launching of the Sarah Ann Marsh at Marsh's Creek in 1854. She was recorded as 126 feet on deck, 24 feet beam and 11 feet deep in the hold and 261 tons register. The tonnage is too small for these dimensions. A later register gives her length as 136 feet. Her tonnage may have been 361 instead of 261. She was insurable for $12,000 when new, and her first master was Capt. T. Jane. He is given as her owner in a shipping list of 1856. In 1873 her registered owner was Allen T. Maybee, gentleman, of Colborne, and he is repeated in the registers of 1877 and 1880. In that of 1874 C. H. Green of Toronto appears as managing owner.

This was a three-masted square-rigger, a barquentine, not a schooner, and called a "barque" by lake sailors; and she had square sails on the foremast, up to a topgallantsail, and lower and middle staysails between the foremast and mainmast. She also had a horse-box, or stable built on deck, to house the two horses used to heave her capstan around, for getting the sails up or the anchor in, or for hoisting timber aboard or towing her through the canals. Capt. James Peacock of Port Hope, now in his eighties, sailed in her as a boy. She was a grand carrier. She broke her back beneath her heavy loads, but went on staggering under them, frapped or undergirt with chains to hold her together. The chains were passed completely around her, hove taut with purchases, tying her up like a parcel.

Her fate is variously reported, and one must choose between her being—-

(1) The wreck in Owen Sound harbor otherwise known as the Jane Ann Marsh.

(2) An unlocated wreck on the shore of Prince Edward County, somewhere near Nicholson's Island.

(3) The hulk used for a dance hall in Oswego harbor, fifty years ago or more and otherwise known as the remains of the schooner Admiral.

As the Admiral was also wrecked on Toronto Point in 1874 this solution seems out.

Prince Edward county's shore seems the most probable resting place of the Sarah Ann Marsh. George W. Collier of Picton says that his brother Sidney was in the vessel over fifty years ago, and she was caught in a gale of wind and snow late in the fall, on the west side of the Prince Edward peninsula. She struck in the vicinity of Huyck's Point, ten miles or so below the place where the Belle Sheridan, Ida Walker, Garibaldi and other vessels were lost, up near the entrance to Weller's Bay.

Huyck's Point is inside Nicholson's Island and the Scotch Bonnet reef. The crew took to the yawl boat and were in her for hours, battling the wind and seas and snow. Apparently they could not make a landing on the point, perhaps because it was night and they could not see a safe place, or perhaps because the sea was breaking so high on the exposed shore they were afraid to try it. After a long time they did succeed in landing on Nicholson's Island, which is less than a mile from the point. At this time it was inhabited. The farmer living there took them in, more dead than alive from exposure to the cold.

Three years ago our friend Lieut. Nik Beketov, late of the Imperial Russian navy, was duck shooting in Prince Edward, and just inside Huyck's Point he came upon the wreck of a vessel about 130 feet long.

It was only the bottom and turn of the bilges that remained, but she showed a centreboard box. Twice last fall the writer searched the beach by boat and on foot and found not a splinter of wreck or wreckwood. But a fisherman told him he had often run his boat over the submerged part of a wreck just inside the point, and that up to two years ago her old ribs showed above water on the shore. Thousands of tons of gravel had been hurled up on the beach at this place by recent gales, and quite possibly they have buried every trace of the wreck, or one season's ice shove may have scrubbed it off into deep water.

At any rate, it could not be seen last fall. But it is certain that it had been there for many years, and it is probable that if the old name board could be recovered it would bear the inscription "SARAH ANN MARSH." One would like to add "of Port Britain," for that was the birthplace of ship and lady.

The sponsor or namesake of this vessel was the third daughter of William Marsh. She became Mrs. Charles Powers of Port Hope.

Another "complication" in attempting to give the history of this vessel is that the Marsh family belief is that two were built bearing her name, one wrecked at Oswego and the other to replace her. This would seem to be borne out by the first Dominion registers published. That of 1873 lists the "Sarah Ann," built at Port Hope, 1854, and described as a steamer in one column and a schooner in another. The same trick is played upon her sister, the Schooner Caroline Marsh, which first appears as the "Caroline," and a "steamer." In the register of 1874 and onwards the vessel of the same dimensions and details appears as the Sarah Ann Marsh, and her description is given as a schooner. The register often fails to differentiate between schooners and barquentines. The slip between steamer and schooner is less often made.

The only casualty record of the Sarah Ann Marsh, which can be: found (in addition to the final one near Nicholson Island) is her stranding on a Friday, June 25th, 1869, on Gravelly Island, in Poverty Passage, near Death's Door on Lake Michigan-—an episode less gruesome than it sounds. The wrecking steamier Magnet released her. She was referred to as "the barque S. A. Marsh" in the despatch in the old Toronto Leader chronicling this escape from the jaws of death. 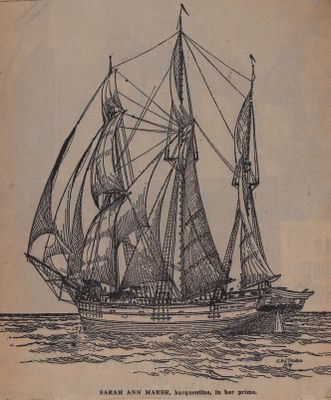