IF all the sunken sovereigns from the military pay chest reputed to have been lost on Lake Ontario' shores were placed edgewise they would pave the place of good intentions with molten metal.

Port Britain, where Schooner Days is at present riding at single anchor in readiness for the spring breakup, has its quota of stories of buried treasure, at home and abroad. One attaches directly to the Marsh family before they founded Port Britain, and is as credible as it is creditable. Col. Wm. Marsh's family plate was sunk for safety in a pond on the ancestral homestead in Vermont during the American Revolution. It was never recovered, for the pond had a quicksand bottom. The other concerns Port Britain before the Marshes came, and as told is quite incredible. Yet all myths begin from something. One would like to find the foundation of the widespread tale of the treasure lost on the way to British troops in Canada, and perhaps if enough versions examined the truth will come out.

The legend immediately affecting Port Britain is that before there was any settlement here at all, during the American Revolution, and about the year 1780, a vessel carrying £20,000 for the payment of the Hessian troops in the service of King George III in America, anchored off the future port and sank the pay chest either in Brand's Marsh or in the swampy meadow now to be seen south of the old Grand Trunk tracks and east of the summer settlement now known as Willow Beach.

This meadow was full of bulrushes until recently, and in the early days it was a fourteen-acre area of enclosed water, a pond or basin filled by Marsh's Creek before that stream debouched into the lake through the sandbar which now blocks it. There was enough water there to float the rafts of timber which William Marsh formed, and apparently, to float the first locomotive for the Grand Trunk, which was brought by vessel and landed at this point. Promoters intended to make an artificial harbor here, as capacious as any on the north shore of Lake Ontario, except Toronto. How far they got seems uncertain. A harbor of some sort there certainly was, as the remains of old piers and piling prove, but it had disappeared by 1870, according to Mrs. W. W. Webster, a great-granddaughter of the pioneer, Samuel Marsh. Mrs. Webster lives at Little Britain, near Lindsay, not to be confused with Port Britain, three miles west of Port Hope.

This, however, gets nowhere rapidly on the trail of the buried treasure. It is highly improbable that pay for Hessians or any of the British troops in America during the Revolution would be coming from Upper Canada, which was practically unorganized until 1791. It is true that Niagara was a base for British partisans, including the famous Butler's Rangers, and the sinking of a treasure chest might be connected with one of their forays into the Mohawk Valley. It is difficult to imagine circumstances which would necessitate the sinking of the money, except the presence of enemy ships or enemy forces. If a treasure chest ever was buried anywhere on the shores of Lake Ontario it may have been during the Seven Years' War between the English and the French, or the War of 1812 between the British and Americans. In both conflicts the opposing sides had warships on the lake. The story of a dispatch vessel hard pressed by the foe sinking or burying British gold meant for the troops haunts every marsh and inlet on the lake shore, and so far no more support has been found for the Port Britain legend than for the ones about the marshes near Oshawa, or at Highland Creek, or Presqu'isle ,or in Irondequoit Bay on the opposite side of the lake.

The Port Britain tradition is that the vanished gold had been sent out from England and was being brought up Lake Ontario, to be landed on the south side and conveyed to British headquarters or the Hessian camp among the revolted colonists. Certainly a roundabout route past the privateers and newborn navy of John Paul Jones. The revolutionaries, the tradition believes, had fighting craft of some kind on the lake and pursued the treasure ship or the brigade of whaleboats and forced a landing somewhere west of the Ganaraska River, which comes in at Port Hope. The gold is said to have been in a cask, and the cask was sunk to conceal it. As is always told in these stories, only one man was entrusted with the final concealment, or only one man survived the episode. He went to England, and was brought back to Canada about 1789 to find the money for the government. He proceeded to the Ganaraska and to the first marsh west of the Ganaraska, and searched and searched, but could not or would not produce the treasure. The date 1789 is seven or eight years before Samuel Marsh and Leonard Soper, the first settlers, appeared at Port Britain. The legend, whatever its basis, does not seem to be connected with the Marsh family. For that matter, they had left behind one "buried treasure" of their own when they came to Canada. There is extant another "buried treasure" story concerning the Marshes, in which a sum is said to have been deposited in a bank, to be distributed when it had, with its accumulated interest, reached $100,000. It reached that amount at the end of some twenty years, but in this case it was the accredited or authenticated beneficiaries who could not be found, and the fortune was as thoroughly lost as the military pay chest.

But the Marshes did find treasure in Port Britain, the treasure of a home site which established them in a new land and made their name honored in three centuries and three countries. 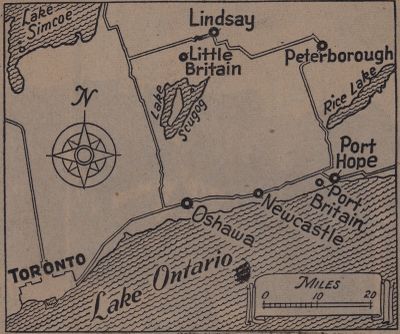