WRETCHES who broke in on the rest of gallant Samuel Marsh, Port Britain pioneer and soldier of 1812, probably knew neither him nor his history nor his daughter, and they must have been primed to the gills with whisky and the greed of dubious dollars for a dirty deed.

Their lanterns flashed on the old warrior, bearded by this time to the knees in frosted silver, through the long continued growth of hair of his face and head. Dead a hundred years, he seemed to be alive - and they had come to rob him of his sixth child. At the sight of Samuel, majestic in his self-woven shroud, they wavered and fled. Yet in their panic flight they remembered the cash value of their crime and they carried off the nearest coffin.

When hunting for vanished Port Britain, on the lake shore sixty miles east of Toronto, a "port" dried up into a boggy meadow drained by a creek which once launched ships and floated millions of feet of lumber and timber, the first evidence of former occupation was the underpinning of the old piers. The second was a stone building which would puzzle any who had not lived in the country in boyhood.

On a knoll or ridge to the east of the dried-up basin was a low stone structure in which chiseled marble contrasted with water-worn slate and boulders. Fragments of lettered inscriptions showed about the walls, and trees and bushes had overgrown it. It had been kept in good repair, concrete replacing the original masonry in places, and heavy iron doors defending it. It was a bourne from whence no traveller returned, as the ancient pier was a wharf at which none but Charon's ferry would dock. A family burial vault; as old as the ancient wharf, and quite as isolated.

This was the last resting place of the great Marsh dynasty which had turned Hope Township from forest to ploughland, built the schooners in the mouth of Marsh's Creek, and made Port Britain. It was within a bowshot of the spot, on which, perhaps, the foundation hollow still persists, where young Samuel Marsh, founder of the Hope Township line, built his log cabin for his bride in 1796. Samuel himself yet sleeps within the vault, a lakeshore pharaoh in a pyramid less pretentious than Cheops, but enshrining as enterprising a spirit. About him lie his wife and their sons and daughters, and their sons and daughters in turn, twenty-six Marshes in all. Samuel's sarcophagus is near the centre, on the north side. Others rest on marble shelves around the walls, or rows below.

LITTLE Susannah Marsh, bright young daughter of Lieutenant Samuel Marsh, who fought in the War of 1812 and died at Port Britain before the war was over, had her own ideas about dowries and birthday presents.

Her father, struggling against the wilderness, ever had generous ideas. Once he got his own mill going, and had no longer to paddle his grist to Belleville, he thought of the comforts of civilization for his family. In the backwoods of Upper Canada pianos were the acme of luxury. And he promised Susannah a piano when she was twenty-one, and he would have given her one, had he lived.

"I'd rather," said Susannah, not yet seven,, "have a nice marble grave when I die."

Her brother William, greatest of the Marsh loyalists who made the wilderness here blossom as the rose, was the mainstay of the family when Samuel, the pioneer, had gone. He was nine years older than Susannah. He was far seeing and prospered. In his generation he lifted his family from the rigors of pioneer life and was bringing in workmen from England to furnish their homes With cabinet furniture and pianos. The piano was the height of luxury in horse-hair sofa and anti-macassar days, and was a well-considered item in any bride's dowry.

William in turn, promised his sister a piano when she became a bride or twenty-one.

"William," said she, "that would be beautiful, but I'll tell you what I would like better. I would like a clean marble bed to sleep on when I die, covered over from the snow and the rain and the crumbling dust."

"What nonsense!" said the practical William. "Father and mother sleep comfortably enough down on the point where he built the old house when they first came here in the wilderness. We have marked their graves, and cleared the trees from around, and the lake sings a lullaby. Our own little God's acre in the open is all I want. I'll give you a piano."

'You are a dear brother," said Susannah, "and I know it. But I'd rather have a little house where we might all live together after we've gone, as we used to live in the little old house before father built this big one among the lilacs."

She was speaking of their old home on the way up Port Britain hill, where ancient lilacs with elm-like trunks now mark the site.

Time passed. Susannah Marsh became Mrs. Sculthorpe. William did the just thing by his sister in the matter of dowry, and the generous thing in addition. She had found a sponsor for her preference in her sister-in-law, Lucy Rowe, daughter of Capt. Rowe of the Cobourg road, married to William's younger brother, Robert. Lucy Rowe was of English family, as were the Marshes, but her people had not been transplanted for so many generations in the American continent. Lucy Rowe agreed with Susannah Sculthorpe that it was better to sleep the long sleep with a roof overhead and marble below and one's own on either side, than to lie lonesome among forest trees to the crooning of the lake. The family vault or mausoleum was to Lucy's mind a necessary appurtenance of every family estate; and truth to tell, while the Marshes had kept their own burial plot decent and tidy, there was little to commend the pioneer cemeteries which dotted so many farms, to the sensitive taste.

So the women joined forces, and, of course, brothers and husbands capitulated. Susannah had her piano, but she had also the satisfaction of seeing a stout-walled structure of lake stone and field stone rise on the silent ridge where the cleared space over which the forest kept a jealous watch was slowly filling with tombstones. At first heavy oak shelves were built against the walls and spaces were reserved on the stone floor below. Later marble rests were provided. "This shall be mine," said Susannah, pointing to one near the door, "my most-wanted birthday present; but I am in no haste to use it. Thank you both, dear brothers, and thank you, Lucy, for your help and your kindness." They were all as cheerful as she was about it, for the Marshes were not morbid stock.

Time continued to pass. Reverently the parents and sisters who had been buried in the family plot were removed to their several niches in the family vault, and were joined by brothers and nieces and nephews, until twenty-six places were taken. Little Susannah was left alone of her generation in Port Britain. Yet she did not feel alone. She had loving children and friends and she clung to the comfort of the assured place there was for her "when my time comes."

It came, and the last of the Marshes was laid beside those gone before, twenty-seventh tenant of the silent house of stone.

The Marsh dynasty now no longer ruled Port Britain. The grandchildren and great-grandchildren of the pioneer loyalists from New England had spread far over Ontario, far over America to the Pacific coast. Port Britain itself dwindled from a port to no port, from a village with grist and sawmills, cooperages, box factories, smithies, post-office, hotel, and so on, to half a dozen houses with no industries at all. Then the horrible thing happened. Ghouls catering to the market for "subjects" for anatomy classes broke into the Marsh vault, forcing the stout iron padlocked grates with crowbars. They carried away one coffin. By blind particular cruelty the one they selected was the one containing the remains of the gentle old lady whose fondest wish as a child had been to be buried where she would rest in peace on a clean marble bed covered over from the snow and the rain and the crumbling dust.

Who knows? Perhaps her wish has been granted after all. Great desires have ways of fulfilling themselves unexpectedly. The ghouls who robbed the grave are probably dust themselves, now, for it happened thirty odd years ago. But there is an old man in Port Britain still, Walter Sculthorpe, who in his seventies maintains a vigil of vengeance over the Marsh vault. The heavy iron doors, reinforced with bars of iron, have been cemented over, and trees have crept up and up and added the network of their roots and branches to defend the citadel. But before any assailant again plies sacrilegious pick and crowbar against the family fortress he will have to pass the barrage of Walker Sculthorpe's shotgun.

PYRAMID OF NATIVE STONE WHERE THE "LAKE SHORE PHAROAH" SAMUEL MARSH SLEEPS WITH HIS KIN. 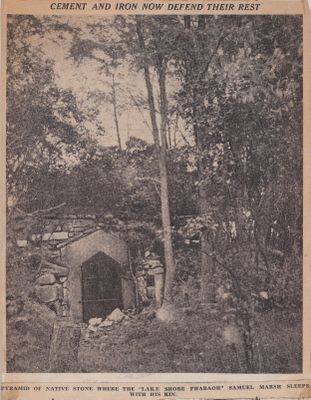